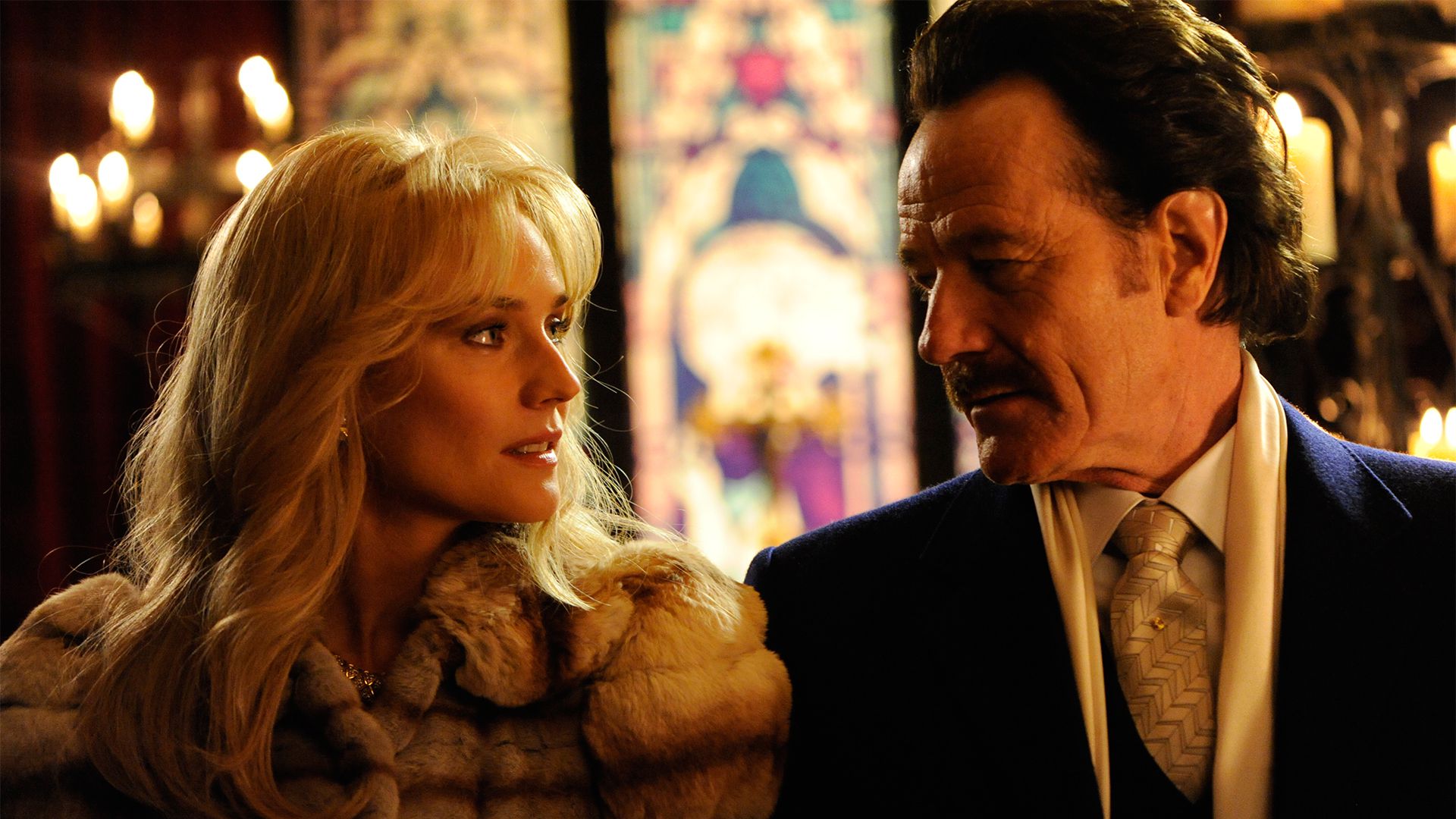 A strenuously sold yet inert string of anecdotes from a nonfiction book about a high-stakes undercover DEA operation, Brad Furman’s The Infiltrator is all revving engines and no momentum. Interpersonal dynamics that might have helped propel the plot wind up in cul-de-sacs: When suburban dad and DEA undercover agent Bob Mazur (Bryan Cranston) gets paired up with scruffy, fast-and-loose Emir Abreu (John Leguizamo), their odd-couple friction might be expected to lead to clashes over strategy or execution, but aside from the unstable informant who Emir refuses to cut loose despite Bob’s qualms, their differences never seem much more than cosmetic. Similarly, the sexual tension between Bob and Kathy Ertz (Diane Kruger), the inexperienced but savvy agent who’s the third participant in the sting operation Bob is heading, plays out more as a Hollywood trope than a lived-in reality, though it’s apparently enough of a threat to Bob’s wife, Evelyn (Juliet Aubrey), to contribute to her decision to temporarily leave her husband.

Audiences are meant to understand that Bob resists Kathy’s charms because he loves his family, but we’re left to take that love on faith, since Bob’s family life is represented by a handful of tableaux that play out like the background action in a cereal ad. Rarely given more than a line or two of dialogue per scene, Aubrey gallantly tries to convey the strain put on Evelyn’s marriage by her husband’s job with facial expressions and body language, morphing from concerned yet supportive to hurt and rejecting to reassured and reconciled.

The action starts in 1986. Bob and his colleagues, posing as a wealthy buyer, his front man, and his fiancée, are players in a scheme aimed at stemming the tide of coke pouring into Florida from Pablo Escobar’s operation in Colombia. As the final title cards inform us, theirs was a highly successful operation, resulting in the arrest of many members of Escobar’s operation and the takedown of a Panamanian bank that had been laundering his money. Yet the screenplay, which was written by the director’s mother, Ellen Brown Furman, makes that victory feel hollow, failing to convey how difficult it must have been to burrow so far into the confidence of Escobar’s camp.

Gaining access to Escobar’s main distributor, Roberto Alcaino (Benjamin Bratt), for instance, seems surprisingly easy for Bob, and beginning to earn the man’s trust involves little more than trotting out Bob’s aunt, Vicky (Olympia Dukakis), to remind Roberto of his own earthy aunt. We hear none of the planning that leads to that encounter, and Vicky disappears from The Infiltrator after that scene, leaving unanswered any questions the viewer may have about why the team risked involving a civilian in such a delicate operation, or whether introducing Roberto to Bob’s actual aunt might not make it easier for the cartel to discover Bob’s real identity. Draining all the complexity and most of the tension from what were presumably carefully engineered and nerve-wracking encounters makes Bob and company’s infiltration of Escobar’s inner circle look about as easy as befriending a new set of neighbors.

Granted, as the on-screen executions and some speeches by nervous informants remind us, these are neighbors who might shoot you in the head at any moment. But The Infiltrator can’t keep up the backbeat of adrenaline-fueled dread that makes true-crime movies like Martin Scorsese’s Goodfellas thrum. Instead, it interjects clumsy scenes like the one in which Roberto lectures Bob ominously about the importance of trust in relationships like theirs while chopping vegetables with a very sharp knife.

The film’s attempts to convey the sleazy glamour of the drug lords’ world are just as flatfooted, its random shots of nearly naked female bodies and obtrusively cranked-up power rock succeeding only in drawing attention to themselves. Frequent cuts from Bob on the job at strip clubs or racetracks to Bob and his beatifically lit wife and children playing an after-dinner board game, or Bob and Evelyn at a parent-teacher conference, hammer home an obvious point about the emotional disconnect caused by undercover work without providing any insight into either Bob’s work or his home life.

Bob and Kathy’s growing friendship with Roberto and his wife, Gloria (Elena Anaya), is presented as a major source of psychological conflict, but just seeing the two at Roberto and Elena’s house a few times falls far short of conveying the depth of their friendship. Instead of feeling their emotional bond, we hear about it, in undercooked scenes like the one in which Roberto toasts the other couple as being “like family.” That speech is typical of The Infiltrator, a short burst of clunky exposition that leaves us with no real understanding of what anyone is thinking or feeling.