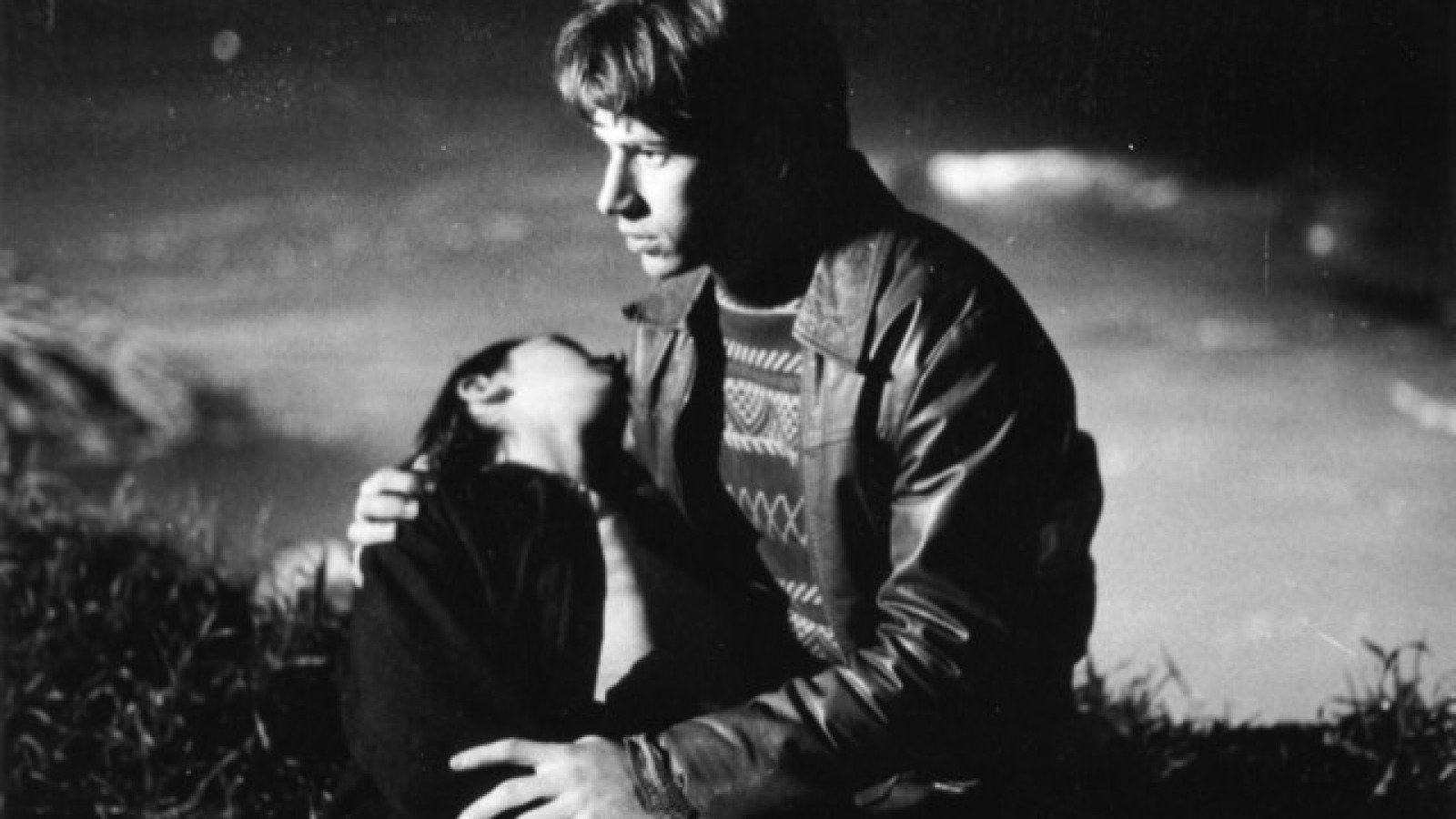 In between the two features screened on Sunday, Pedro Costa summed up what I see, so far, as his over-arching project: “It’s my dream, really, to recompose a bigger and bigger family.” Fitting that his debut feature, Blood (O Sangue), is, as James Quandt puts it, “a false start.”

The family ends in shambles here, scattered and unreliable, a debt due. Confident and brisk, dreamy and romantic, Blood is one of those debuts that, try as it may, cannot hide its influences no matter how striking and original a voice it does, indeed, possess. I saw the picture as a kind of mishmash of many influences, but most striking for me were the echoes of Ford (my mind sprung to The Searchers’s iconic back-lit family), Fallen Idol (the chiaroscuro night), The 400 Blows and The Spirit of the Beehive (the able camera and poignant, young protagonist) and, if not all of Bresson, in particular Mouchette (that slap that opens the picture), among other New Wave flavorings from both France and Germany. Introducing Blood, Costa said it was a film “protected by cinema,” and that as he has matured his films are “more in danger, now, of cinema.” Funny that the earlier, “simpler” film is about the falling away of familial bonds, how blood only binds so much, how alone a child feels, how dark the night of childhood cloaks the world, and family.

The film opens on a muddy road with a close up of Vincente, a stern youth, blocking the path of his craggy father, who promptly slaps his eldest son (awake?) in the half-light of dusk. The father is leaving; nothing will stop him. Vincente asks what he should tell his younger brother, Nino, about this departure. The father replies: “Tell him I’m dead.” Blood gives us the consequences of these brothers’ failure (in part by choice) to fill the void of absent parents. Vincente tries to adopt a father’s posture, just as Clara, Vincente’s object of desire, stands in as Nino’ surrogate mother by virtue of her schoolteacher profession and everyday familiarity with the brothers. The three of them try, at least at first, to reinvent themselves as a new kind of family, rearranging furniture and wardrobes to suit their whims. But the spell is broken when Nino’s and Vincente’s uncle abducts the young boy while the would-be parents go on a date by turns magical (dig that cut to Clara jumping into the frame along with a dance song) and tragic (scarred by a drowning and the threat of infidelity). From here on, Blood pushes, however elliptically, to reunite the separated brothers. But obstacles line their paths home: the biggest is another path altogether: the river. Their story ends on the river, with Vincente and Clara on its banks, falling into each other on the grass, while Nino steers a boat downstream, looking off screen at the future. The last line of the film comes from the boat’s owner sitting off screen: “I’m going to take a nap.” Not quite a surrender to fate, Blood ends, rather, accepting the challenge to one’s will that life’s variant possibilities present: it ends in a flow, on a river, with youth pushing its frail vessel forward, eyes open. Nino may be alone, and he may be lost, but he never stops dreaming of that return to home, to some kind of family. Nostalgia’s longing (or, better, the present-tense, Portuguesean version saudade) haunts Costa’s cinema—its early ebbs and flows and its later jumps and pauses.

The first film in the Fountaínhas trilogy, Bones (Ossos) ups the Bresson ante on Blood to a L’argent pitch—boxy and narrow and loud with the weighted world—building new families at the cost of others. Bones leans in on itself, closing off avenues as often as it turns corners: it starts with a newborn abducted from its mother, Tina (Mariya Lipkina), by its unnamed father (Nuno Vaz), to be used as a tool to beg for handouts, wrecking Tina’s already thin will; but this doubled absence provides an opportunity for Tina’s trustworthy cleaning-lady neighbor and friend, Clotilde (Vanda Duarte), to assume the role of provider, to start a new household. It ends with a door shut on the audience, secluding this new family. In this film, there is a longing for order, say the basic framework or structure (bones?), that family provides. Safety is not numbers, per se, but selection. Costa’s recomposition of “a bigger and bigger family” is a process of choice—who to trust, who to love, who to save and who to leave behind. The closing door that begins the credits not only denies our access to this new family, it shifts focus to the ambient sounds of the ghetto: chatter, shuffling, a remote violin’s whine, car horns and doors, dogs barking. This shanty maze is alive, and teeming, if moldered and oblique. Bones’ saudade for a humble family life motivates its characters’ desperate wills. Even its less favorable characters (not one is “pure” by any standard, although some are more “likeable” than others), at bottom, yearn for such simplicities as food and a clean home. Its chief protagonist is a maid, the other a nurse—both professions mean to refurbish, to restore life.

In a film this segregated (spatially, emotionally), at first it’s striking, and sometimes confusing, to see so many characters doubled. For Bones is not reducible to the maid Clotilde doubling the nurse Eduarda (Isabel Ruth): Clotilde and Tina are echoed by a pair of near-spectral doppelgangers (Clotilde’s is played by Zita Duarte (Vanda’s sister), while Tina’s is played by Clotilde Montron, creating a dizzy swirl of significance and cross-pollination within this film and its housing “Fountaínhas trilogy”) who look at more than speak to Clotilde and Tina, just as Clotilde has the same, but harder and more angular face of Tina’s absent, deadbeat boyfriend (who, in turn, finds some solace both with the nurse, Eduarda, and a prostitute (played by Casa de Lava’s Inês de Medeiros) who asks whether she reminds him of the baby’s mother, if they look alike, which they do). As much as the ghetto’s corridors network decay and grime, they also (obviously) link people (visually and physically). These routes offer possibilities for transformation and renewal and transition as much as for ruin, structuring Bones’ argument for film as a body: we, too, are segregated mirrors, left and right hands, feet, eyes and ears, as this film mirrors people in and around a space, building it by pieces, each limb (or shot or edit or sound) aiding its other, its kith, its kin.

I met Vanda Duarte in Colossal Youth as a hacking, methadone-addled mother named Vanda prone to digressive storytelling, and I will meet her again, when I see In Vanda’s Room on Saturday, as a heroin addict losing both her home and her health. Duarte sits, quite clearly, at the center of this “trilogy” since her characters’ will for family organizes the people surrounding her (sons, daughters, fathers, mothers, lovers, neighbors) as much as the guiding hands of Costa direct the films. For, unlike the other women of her neighborhood, at least in the bookending films I’ve encountered so far, Vanda/Clotilde acts. In Bones, it’s Clotilde who retrieves Tina from the hospital with her baby; Clotilde forces Tina back into the world after Tina’s baby is stolen; Clotilde leaves her man to save herself and her daughter and Tina from his ceaseless sexual harassments; it’s Clotilde who works every day. Much of this devotion to (this driven desire for) a family is echoed in Colossal Youth: Vanda ends that film going to work; Ventura’s wife Clotilde leaves him; Vanda pushes herself to stay (relatively) clean for her baby. I tremble to think what her video-grade junkie life will look like for three hours. But I’ll be there, however anxious, ready to hear that cough and meet her gaze. I can see why Costa returns to her, for Vanda is worthy: she meets the drift of life.

Proving more diversionary than substantive, the black-and-white video short “Ne change rien” features Jeanne Balibar singing three songs in three shots, all on video, excerpts from an ongoing project (that Costa said should be finished by May) about Balibar’s new desire to be a musician. The first song is an original composition, shot in what looks like a green room; its refrain reminds us that “A rose is a rose is a rose.” The second song comes from Jean-Luc Godard, as commissioned by Balibar, and gives the short its title, “Ne change rien.” A busy flurry of samples and swoons both electronic and horned, the song is less interesting than Costa’s composition: Balibar’s face rests centered with the mic on the right in front of an occasionally blinding white light. The third song, written by Kenneth Anger, is called “Torture” and you can barely see Balibar but for the silver of her bare back and the gentle sway of her skirt in the dim constellation of lights on some alien stage. There’s not much to say about this project so far, as much as I can tell, other than that Costa’s eye is impeccable and Balibar’s music is, well, very French. At least her voice is reedy and seductive and the images match the sounds as perfectly as you would imagine. I could make a joke about the refrain of the Anger song (“You’re torturing me…”) but, well, that would be silly and unfair and wrong; it’s the best of the lot.