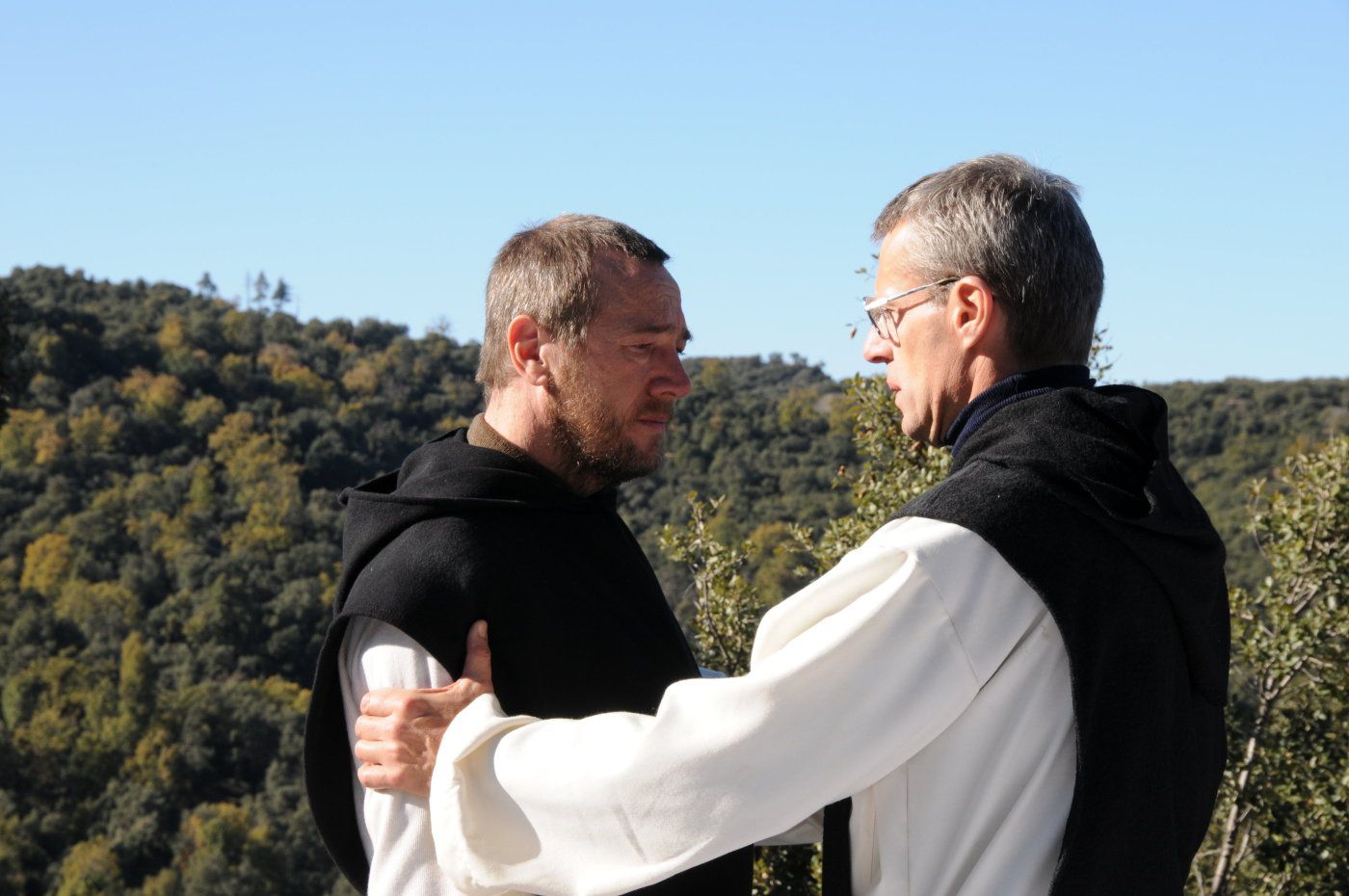 Although the film was produced prior to the “Ground Zero mosque” controversy, and though it was made by a French filmmaker based on events that took place in Algeria in the mid 1990s, it’s difficult to watch Of Gods and Men in the context of the New York Film Festival without being reminded of the needless griping surrounding the building of the Islamic cultural center two blocks from the ruins of the Twin Towers and the accompanying anti-Muslim rhetoric disseminated daily through the hysterical headlines of outlets like the New York Post. That’s because Xavier Beauvois’s film is intimately concerned with the distinctions between religion as a progressive force, as a neutral, everyday way of life, and as a destructive power.

While the North African monks that comprise the movie’s main characters live in harmony with their Arab neighbors and are generally characterized by good works, their opposite number are a band of Islamist terrorists who slaughter a group of Croatian Christians early on in the film and strike equal fear into the moderate Muslims who make up the hillside village where the film takes place. Beauvois is very clear on the importance of distinguishing between the Muslim citizens who are simply going about their ordinary lives and their radicalized counterparts—explicitly stating his theme in a closing monologue. While both Beauvois and the monks have little trouble making this distinction, the fact that the film places such emphasis on the differentiation is indicative of the dangerous social climate existing in many Western countries, most prevalent in our own via incidents such as the stabbing of a Muslim cabbie in New York, the direct result of the proposed erection of the cultural center.

Of course, limiting our discussion of Of Gods and Men to a consideration of the lower-Manhattan controversy—or America’s occupation of Iraq and Afghanistan, both obvious additional parallels—would be far too restrictive. After all, France’s own history of colonialism is the more immediate context here (and the cause of much anti-French militancy in North Africa), but it’s a testament to the ubiquity of Western religious and cultural imperialism and the ensuing resentments from both sides of the power divide that the film speaks perfectly to both situations. More generally, Beauvois’s movie is about the practical limitations of an idealistic progressivism and the balance between the need for self-protection and a liberal respect for others’ ways of life. That Beauvois considers the complexities of this untenable equilibrium and still comes down unambiguously on the side of progressivism is one indicator of his film’s deep moral commitment, an ethical imperative echoed by the director’s casting a group of monks as the exemplars of the film’s liberalism and imagining the progressive project as a question of Christian faith and sacrifice.

Still, there are Christians and then there are Christians, and the monks in Beauvois’s picture are a particularly benevolent bunch. Providing free medical service and advice to the local Arab population, the brothers never assert their superiority over their charges and never try to convert them. As one monk phrases the terms of their mission during a dinnertime sermon, the order is committed to “creat[ing] relationships with others not based on power.”

Through a series of austerely lit fixed takes and slow, methodical pans, Beauvois evokes the daily life of the monks and the vast sweep of the valley landscape, while with a slightly livelier camera he gives us a sense of the mutually beneficial encounters between Christian and Muslim. While it’s true that, a vigorous music-filled ceremony excepted, we get little feel for the daily lives or customs of the Arab population, Beauvois’s story is clearly about the monks and, consequently, the film devotes ample time to their own musical ceremonies (a semi-circle of hooded men chanting in a dimly lit chapel, a round of tearfully ecstatic close-ups of the men’s faces as they listen to Swan Lake) as well as their spiritual crises.

These struggles come courtesy of the threat of Islamist terrorist groups who have recently heightened their activity in the area. After the nearby slaughter of the Croatians, the monks are offered army protection that their leader Christian (Lambert Wilson) categorically rejects. Continually advised by the Algerian government to heed the demand of the Islamist group and flee the country, the brothers face an agonizing decision about whether to stay and fulfill what they feel to be their duty or whether to save themselves and abandon their Arab neighbors to the influence of the terrorist group, an organization greatly feared by the local inhabitants. Parallels with Iraq and Afghanistan naturally occur. What good, the monks wonder, is it to stay and fight out a losing cause? And yet, what right have they to simply abandon their people when the going gets tough? But unlike the United States’s presence in those two Arab countries, these Westerners are very much wanted by the people who live there and they’re viewed by Beauvois not as a remnant of an imperialist past (or exemplar of an imperialist present), but as a force for genuine progressivism. Still, per the symbolism employed by resistance groups, they are quite clearly foreign occupiers. So even though, when the terrorist groups arrive unexpectedly at the monastery on Christmas Eve, Christian is able to turn them away thanks to an apt quotation from the Koran, the threat of their return remains imminent, as the potential capture of the monks represents a strong negotiating tool for the militants.

Breaking up its quiet, contemplative tone with occasional fevered outbursts of activity, Of Gods and Men maintains a tension borne of uncertainty—the same uncertainty we all live with in the post 9/11 world—while paying proper respect to the hushed, unhurried lifestyle of the monks. This contemplative mode allows Beauvois to devote ample time to the spiritual crises of each of the individual brothers. While no monk is untouched with doubts, some, like the aging doctor Luc (Michael Lonsdale), are resolute in their conviction to stay, while others, like the young Christophe (Olivier Rabourdin), are racked with far more tortured qualms, his God-directed cries of “Don’t abandon me. Don’t abandon me,” painfully audible through the monastery’s paper-thin walls.

But spiritual crisis devoid of real-world context is meaningless: the apolitical stuff of lesser Bergman. What makes this round of spiritual doubt so compelling is that it’s grounded in an explicit geopolitical context and tied directly to the question of social action versus resigned defeatism. There’s a touch of the latter in the monks’ acceptance of their potential status as martyrs, but mostly their brand of Christian humanism is about the importance of continuing on with one’s duty, which, significantly, is not the duty mandated by nationalist imperatives, but by the dictates of social conscience. If spirituality often begets a smug apoliticalism and religion is more often misapplied than not, the two can also be a force for progressive action. That Beauvois equates Christianity with a welcoming liberalism and Islam largely—though hardly exclusively—with terrorist activity is a potential stumbling block for viewers, but in case the audience misunderstands the filmmaker’s generous vision of humanity, a final monologue delivered by Christian over an eye-filling shot of a forced march through a snow-drenched landscape tips the balance away from those who would equate the world’s second largest religion and its vast, influential culture with the minority who distort its lessons. In the process, the film issues a stern rebuke to the small band of bigots that has allowed their opposition to the lower Manhattan Islamic cultural center to shade over into an ugly xenophobia.

Lean on the Big Screen: The Bridge on the River Kwai