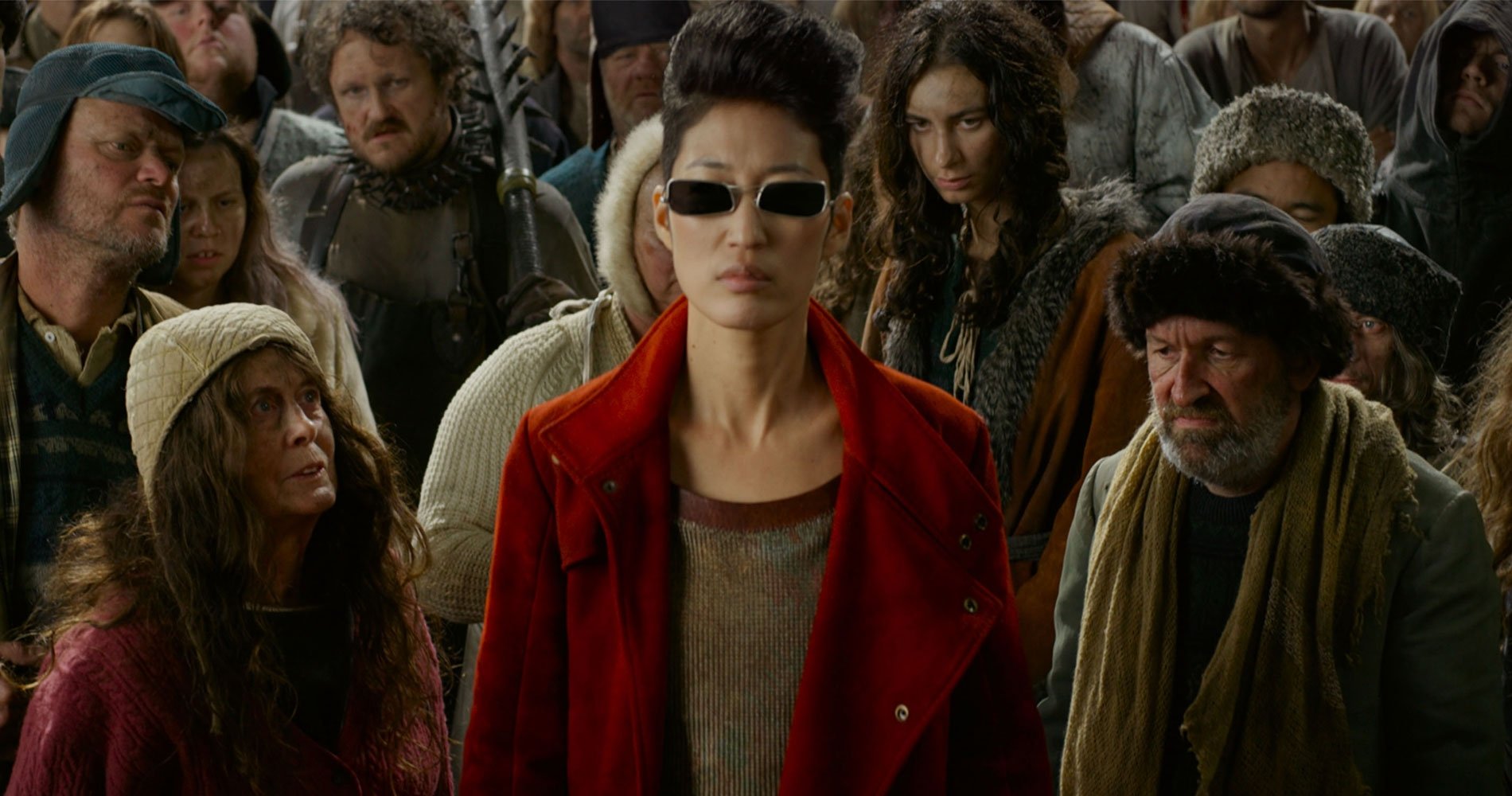 Like the denizens of The Hunger Games’s District One, the almost entirely voiceless baddies of Christian Rivers’s Mortal Engines are an overdressed grab bag of aristocrats living off the pillage of a ruined world. As in that earlier dystopian series, the downfall of this film’s villains will come at the hand of a spiky and determined young woman with vengeful eyes and a thing for premodern weaponry. But unlike The Hunger Games’s aristos, the upper class in Mortal Engines don’t live in some static city-state. Instead, they inhabit a giant clanking beast of a thing called London that rolls around on massive tracks and gobbles up everything in its path. Thaddeus Valentine (Hugo Weaving), the beetle-browed and ornately named visionary who manages London, has a name for this policy: Municipal Darwinism.

What brought Earth to this low state of urban affairs is conveyed in a doom-laden, narrated introduction that feels straight out of the Lord of the Rings films—understandably, perhaps, given that Mortal Engines is a product of Peter Jackson’s WingNut Films. (Jackson adapted the screenplay, along with his usual cohorts, Fran Walsh and Philippa Boyens, from Philip Reeve’s novel.) We’re told that the requisite apocalypse was brought about by an exchange of civilization-shattering quantum laser cannons that left much of the planet’s surface desolated. Most of those who are left roam about, scavenging for things left by “the Ancients” in steam-powered cities that leave the land streaked with huge track marks. It makes for an arresting set of images, but not ones that the film lingers over before getting to the fireworks.

The story’s requisite orphan warrior is Hester Shaw (Hera Hilmer), who cuts a striking black-trenchcoated figure with her eyes blazing over the blood-red scarf covering most of her face. Foiled from assassinating Valentine, the scientist-hero of London with a poorly hidden dark side, Hester narrowly escapes the city with an eager-beaver striver, Tom (a particularly bland Robert Sheehan), who takes a while to figure out that Valentine is less of a heroic scientist than a fiendish supervillain who wants to build one of the city-killing weapons that destroyed the Earth the first time around.

Setting the mismatched pair—nerdishly eager boy and quasi-feral rebel girl—loose in the film’s ill-defined postapocalyptic wilderness would seem to be a setup for a romance that will bloom in the last reel. That comes close to happening, but Mortal Engines is really only interested in putting its characters in as close proximity as possible to stunning CG landscapes.

Some are the kind of epic scenery familiar from the Lord of the Rings trilogy, like the fancifully pagoda-spiked Shangri-La of Shan Guo, a land whose riches Valentine seeks to plunder. Others have a little more wit to them, such as the Old World remnants making up the mobile jumble of London (above is St. Paul’s Cathedral, below are bits scavenged from the Underground). After a while, though, as Valentine’s Death Star city rumbles toward the inexplicably paradisiacal Shan Guo, it all starts to feel like a showreel for the film’s special-effects team than an honest effort to tell a story.

One of the central problems with Mortal Engines is one that audiences have struggled with in many other sci-fi epics: All of its wondrous scenery seems to exist only to be destroyed. One after another, the beautiful places that Hester and Tom stumble across are quickly annihilated, if not by London then by Shrike (Stephen Lang), the relentlessly homicidal Frankenstein-Terminator amalgamation who raised Hester and can’t forgive her for not wanting to be turned into an Ex Machina-like simulacrum of herself.

In this tired chase narrative, which barely even pretends to investigate what’s interesting about its gonzo steampunk Star Wars scenario because it’s too busy trying to get to the next big set piece, only the bold stand out. Such as Anna Fang (Korean singer and multimedia artist Jihae), a swashbuckling rebel pilot with a killer Elvis pompadour and fierce deadpan who pilots a bright scarlet airship with the same Zen cool that she wields the secret spring-spike in her boot heel. Hurled in as a desperate attempt to bring some Han Solo dash and verve to Hester and Tom’s bland hero pairing, Anna works wonders in the film’s final third, when Shan Guo goes toe to toe with London. But it’s not enough to save this expensive and loud YA epic, which manages maybe one decent gag in its entire running time: Munching on a dusty package of thousand-year-old Twinkies, Hester notes that “the food of the Ancients is indestructible.” If only this uninspired mashup had that kind of fortitude.