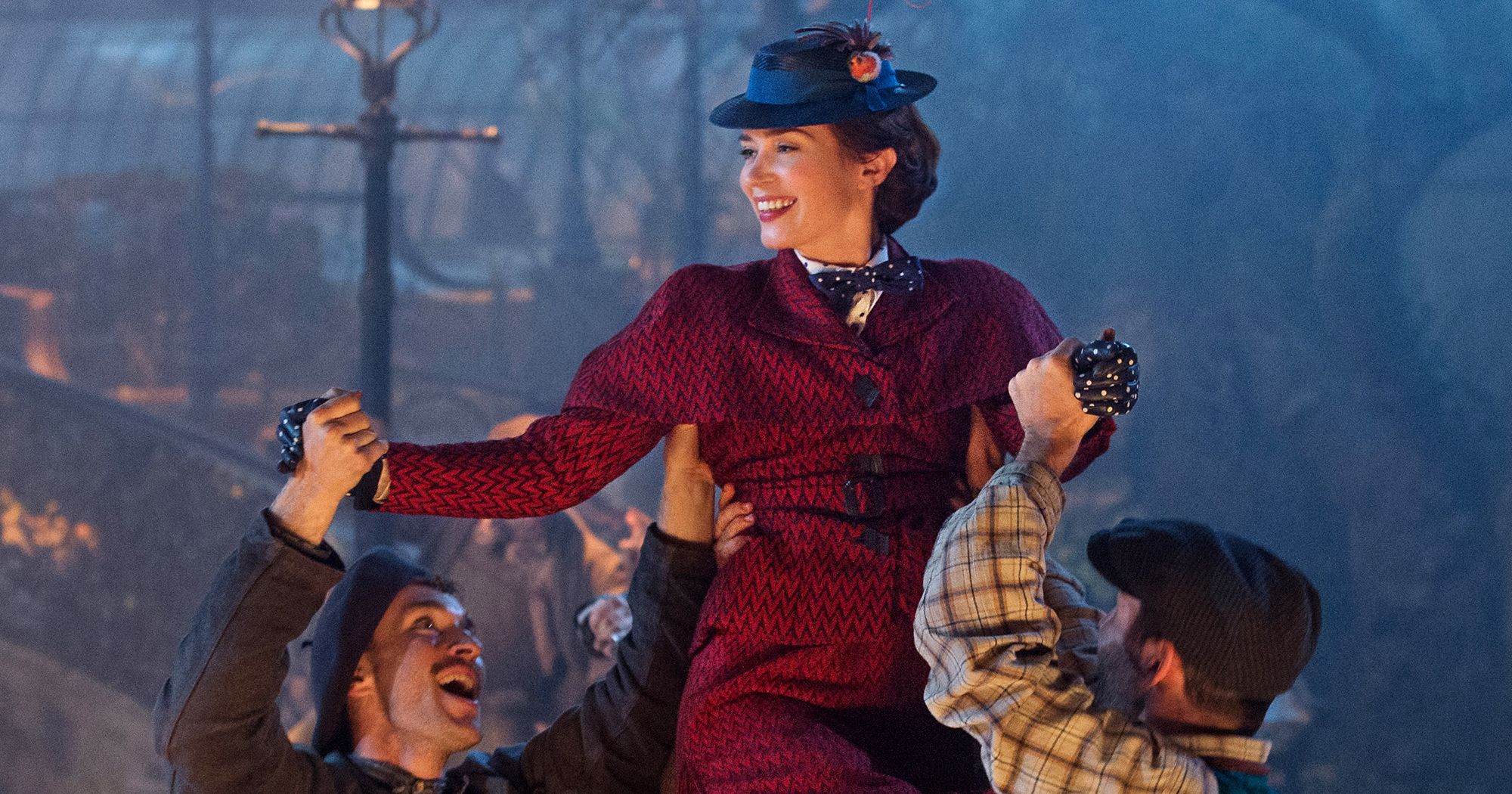 From its opening song—which introduces the audience to Jack (Lin-Manuel Miranda), a gleeful street lamplighter—Rob Marshall’s Mary Poppins Returns makes clear that it’s uninterested in expanding on the world of Mary Poppins. This scene is indicative of the tendency of this film to only slightly tweak the iconic characters from Robert Stevenson’s 1964 classic—in this case, Dick Van Dyke’s cockney chimney sweep, Bert—and haphazardly stuff reconstructions of some of Mary Poppins’s most memorable moments into a meandering, uninspired narrative revolving around a missing bank note and a broken bowl. And this derivativeness leads Mary Poppins Returns to play less like a direct sequel than a tepid remix driven solely by nostalgia.

The two Banks children from the original film, Jane (Emily Mortimer) and Michael (Ben Whishaw), are all grown up and the latter now has three kids of his own, all of whom are struggling to cope with the recent death of their mother. And thanks to the predatory banking practices of Michael’s boss, William Weatherall Wilkins (Colin Firth), the whole family also faces an impending eviction from their longtime home. Ultimately, though, the more things change, the more they stay the same. And once Michael wraps up his tender song of mourning for his deceased wife early on in Mary Poppins Returns, the matriarch is virtually forgotten as the film returns to dutifully replicating the narrative and tonal beats of the original almost note for note, only with less memorable songs and a less present Mary Poppins.

Where Glynis Johns’s Mrs. Banks from Mary Poppins was a suffragette, Jane now is an advocate for worker’s rights, and just as David Tomlinson’s Mr. Banks was tasked with chiding Julie Andrews’s Mary Poppins for her excessively cheerful whimsy, Michael has now stepped into the role of perpetual buzzkill for Emily Blunt’s rendition of the beloved nanny. And reminiscent of the earlier film’s scene depicting Mary and the children magically floating up to the ceiling to join their Uncle Albert for tea, we get here a gathering on the ceiling of Mary’s Aunt Topsy’s (Meryl Streep) repair shop, which turns upside down every second Wednesday of the month.

For those who enjoyed the dancing chimney sweeps in Mary Poppins, Mary Poppins Returns offers a similar spectacle of scrappy, cavorting working-class men—only this time the men are lamplighters. But at least this new number, the Gene Kelly-inspired “Trip a Little Light Fantastic,” sung by Miranda, contains more than a touch of its forebearer’s charm and playfulness and features some truly impressive bicycle stunts and choreography.

The same cannot be said of this film’s spin on the famed scene in Mary Poppins in which Mary, Bert, Jane and Michael jump into a chalk drawing and come across an array of animated characters. Marshall’s update of this sequence, which stands as the most egregious of this film’s numerous hollow appropriations, instead has Mary magically transporting Annabel (Pixie Davies), John (Nathanael Saleh), and Georgie (Joel Dawson) into the world depicted on the side of their late mother’s prized bowl, which they have just accidentally broken. This sequence does little but directly recall many of the original films’s touchstones, including the dancing penguins and protagonists donning turn-of-the-century attire, and jumpstarts a subplot that not only takes up nearly the entire second act, but leads to a narrative dead end, and with the once-crucial bowl suddenly forgotten.

For all of its slavish devotion to Mary Poppins, the sequel doesn’t even seem to recognize its greatest attribute: its star. As Mary, Blunt brings a captivating blend of cheeky humor, puckishness, and tenacity to the role, and her initial scenes with the children are nearly as droll and charming as those with Julie Andrews’s Poppins, Jane, and Michael in the original. But as Mary Poppins Returns proceeds, Mary becomes something of a tourist in her own film, often simply following the whims of the Banks children and chiming in only to offer the occasional meek words of encouragement. And Mary’s marginalization, which serves to make additional room for the tedious drama between Michael and the bank and a tame romance between Jane and Jack, leaves her unfortunately as a mere shadow of the character she once was.