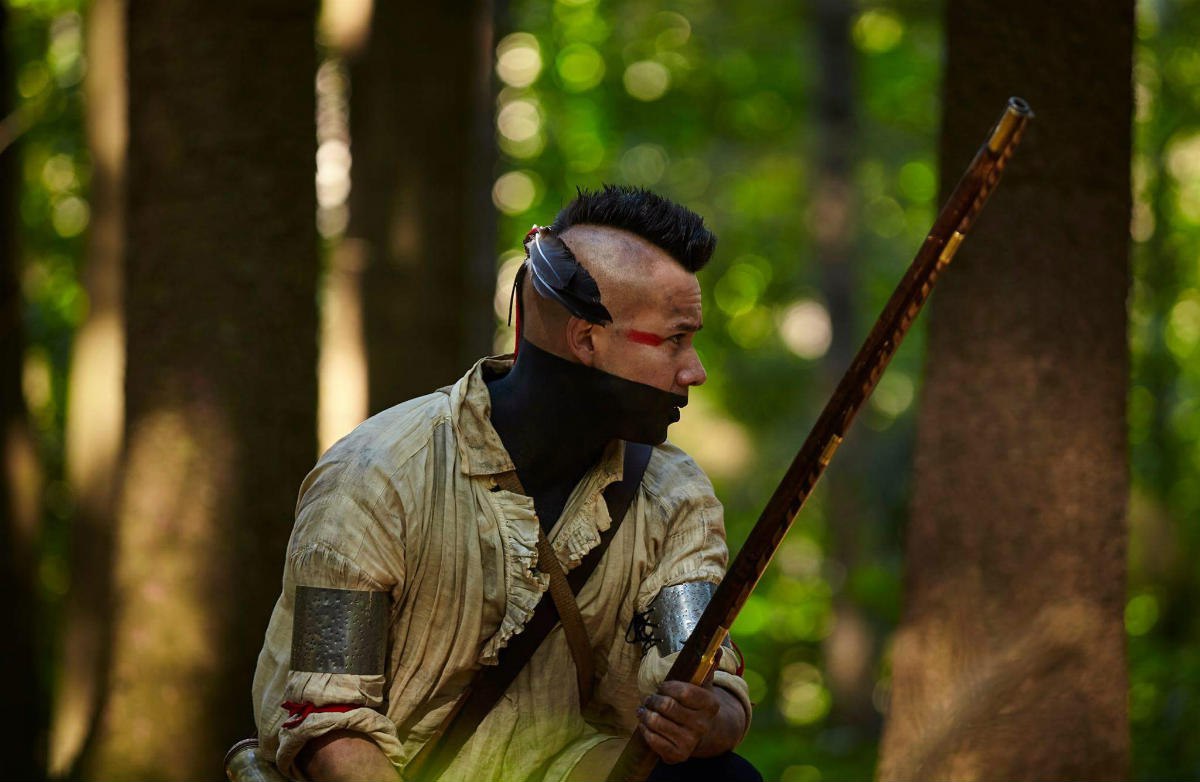 Ted Geoghegan’s Mohawk, a survival-of-the-fittest film that’s charged with a thunderous urgency, is set in New York shortly after the War of 1812, which fractured the already imperiled safety of Native American tribes, who are torn in their allegiances between the Americans and the British. Calvin Two Rivers (Justin Rain) believes that the Mohawk should align themselves with the British and declare war on the Americans. His lover, Oak (Kaniehtiio Horn), agrees with Calvin, though she doesn’t share his impetuous eagerness to enter the fray of war. She understands that the Mohawk are making decisions that pertain to their immediate survival, and so they must be decisive yet careful. Straining the Mohawk’s loyalties is Joshua (Eamon Farren), a son of British royalty who’s pushing the tribe to support his government. Joshua is also Oak’s lover, as she enjoys a polyamorous relationship with both men, spiritual brothers who’re poignantly accepting of one another.

A prestigious period war film might spend the better portion of an hour establishing these conflicts and relationships, with expository blather lifted from high school textbooks. Such narrative pomp and circumstance is a way of laundering violence—of rendering it polite and subsequently glorifying our disreputable appetite for carnage. After all the embarrassingly literal-minded talk of “taxation without representation” in Roland Emmerich’s The Patriot, for instance, one might feel that its eventual orgy of butchery isn’t only necessary but noble. Mohawk, by contrast, has been pared down to the bare essentials, to a primordial struggle between love and hatred, rocketing through its first act in a matter of minutes. The film doesn’t have time for pontificating, as it devotes its resources toward its reason for existence: to proffer a lurid fantasy of retribution, steeped in American guilt over Native American genocide.

Calvin ignites a war with American soldiers who are eventually led by Hezekiah Holt, a racist buzzard who’s played by Ezra Buzzington with frighteningly distinguished venality. As over the top as Buzzington’s characterization initially appears to be, it’s freighted with sadness, panic, and self-loathing. And the Mohawk are similarly textured. Calvin and Oak are noble and connected to the Earth in fashions that flirt with stereotype, but they are also viscerally frightened and prideful. Geoghegen lingers on the Mohawk’s corporeal pain with an attentiveness that straddles a familiar genre-film line between empathy and exploitation.

With Mohawk, Geoghegen attempts to mount a production on a scale that he can appear to barely afford, which infuses the film with a formal combustibility that complements the fury driving its narrative. The film features a handful of characters, few establishing shots, roving handheld cameras, and primitive costumes and set dressing, suggesting a play that’s been spontaneously mounted in a park. Elaborate conversations and gunfights are viscerally chopped up into alternating close-ups, freezing shards of violence in our minds while conjuring an impression of instability. Mohawk has the textured flimsiness of an early film by Larry Fessenden or Ti West. Geoghegen cuts through the pageantry of war filmmaking, reducing it to people gutting each other unceremoniously, with their souls locked in seemingly ageless patterns of oppression and resistance.