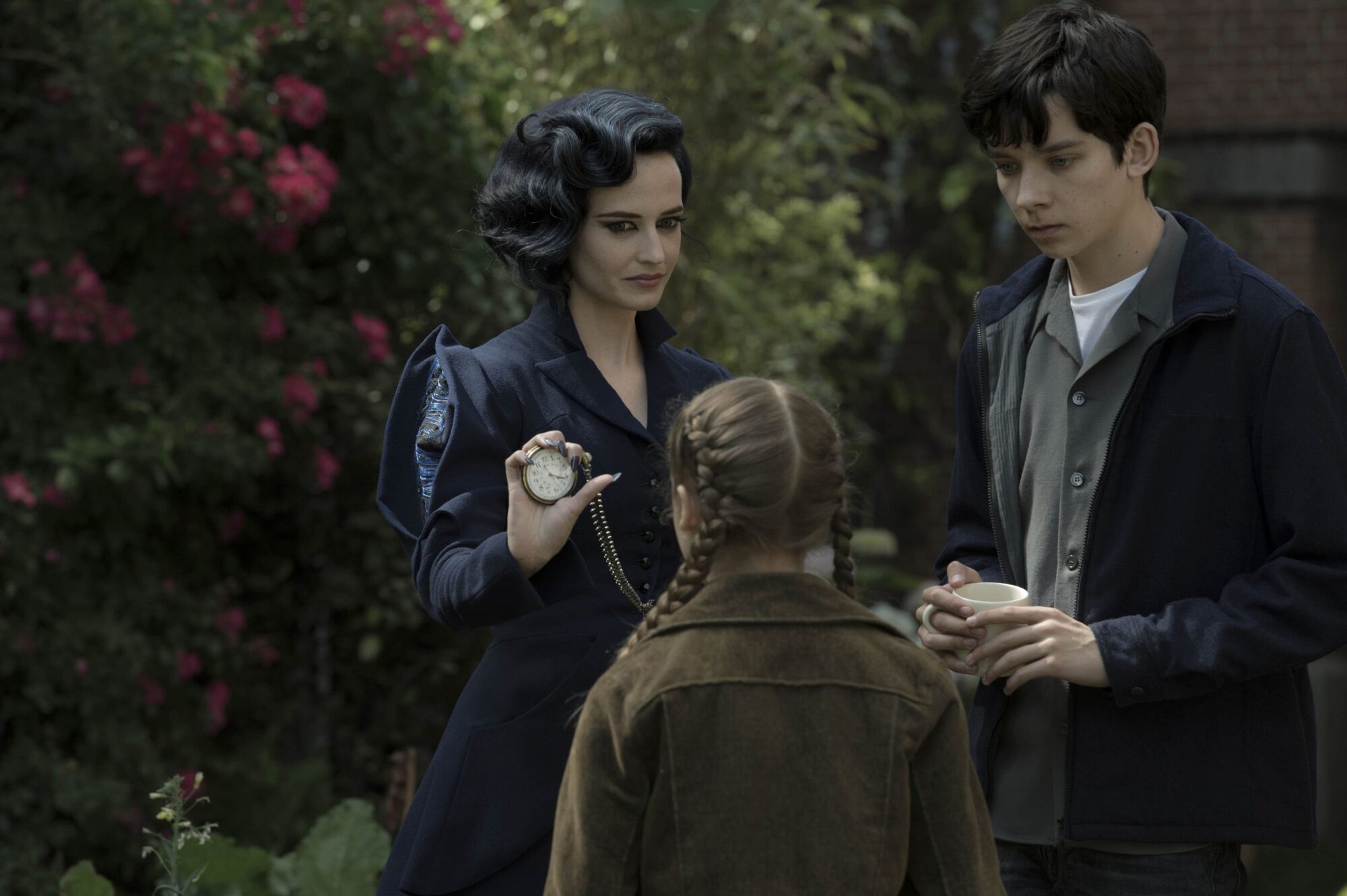 The opening title sequence of Miss Peregrine’s Home for Peculiar Children, adapted from the acclaimed debut novel by Ransom Riggs, are so robotically dull in their GGI-addled affectations that one fears that director Tim Burton has lost himself forevermore within that soulless loop of corporate synergy that opened up around him in the early aughts. But then, after fake smoke plumes across the screen, the film jarringly (and hilariously) jump cuts to a long stretch of Florida beach so drably unadorned that one must take it at face value as a horror from which a child as imaginative as Jacob (Asa Butterfield), and by extension Burton, might want to escape.

After witnessing the strange circumstances of his grandfather’s death, Jacob encounters clues that inspire memories of the stories his grandfather, Abraham (Terence Stamp), told him as a child about a mysterious orphanage on a Welsh island and its peculiar, wondrous inhabitants. And at the urging of a therapist (Allison Janney) charged with helping him to distinguish the differences between fantasy and reality, Jacob eventually stumbles upon a kind of wonderland after he and his father, Franklin (Chris O’Dowd), travel to the island to determine the veracity of his grandfather’s remarkable tales.

But even as the peculiarities of this world are revealed to Jacob in ways that CGI could only have made possible, the film’s jolts of the ornately weird play second fiddle to the quietly felt sense of the characters’ alienation. In effect, Burton sensitively keys us to Jacob’s anxious befuddlement over what Abraham might have truly experienced here long ago during World War II, understanding the boy’s search as spiritual yearning: a quest for wonder, however dangerous, as a salve for the humdrum of a misunderstood life.

Throughout the film, Burton fixates elegantly on the eponymous children’s unique gifts. Once Jacob arrives at Miss Alma LeFay Perigrine’s (Eva Green) orphanage, after passing through a loop that allows its maker (here, Miss Peregrine herself) to live a particular day over and over again, so as to stave off the horrors of the future, he is immediately subsumed in the routines, ordinary and not so ordinary alike, of a place trapped in a kind of existential amber. Among the peculiars are Enoch (Finlay MacMillan), who has the power to give life to the inanimate with little animal hearts; Hugh (Milo Parker), who can direct the many, many bees that live within his stomach; and Emma (Ella Purnell), who can levitate and must wear a pair of lead shoes so she doesn’t fly away and disappear into the heavens.

In this place, where time is reset daily just before a German plane can drop a bomb atop the orphanage, the peculiarities of these children are mostly useful for minor things, such as little Bronwyn (Pixie Davies) using her superheroic strength to pull enormous carrots from the ground, or Emma removing her shoes and tying a rope around her waist so as to bring a fallen critter back to its nest. These children—and, in turn, Burton’s camera—take visible joy in expressing these peculiarities for Jacob, and this celebration of difference allows him to embrace his own peculiarity, shared by Abraham, of being able to see evils that no one else can. It’s a gift that proves useful when Baaron (Samuel L. Jackson) and his hollowgasts (think Jack Skellington by way of Pan’s Labyrinth’s Pale Man) come knocking on the orphanage’s door, hungry for the peculiars’ eyes, the ingestion of which will make them human again.

A vision in Miss Peregrine’s Home for Peculiar Children of Jacob pulling a floating Emma from a rope across a Welsh beachside and toward a battle with the hollowgasts is as haunting as any Burton ever summoned, namely for its multitude of meaning: for teasing the romance that builds between Jacob and Emma, and for the sense of moral agency and empathy that so clearly informs Jacob’s gait. Also impressive is the daring, force, and tact with which Jane Goldman’s screenplay presents Jacob’s saga as a metaphor for the Holocaust, evoking its horrors in everything from Jacob taking Miss Peregrine’s peculiars to the orphanage’s attic and away from an advancing hollowgast, to Baaron’s moral “hollowness” and his grotesque appetite for destruction.

Throughout, Burton shuttles his peculiars in and out of loops, through past and present as they fight the hollowgasts, and his set pieces exude an alternately frightful and comic tenor that rarely feels off-balance. Baaron is never scarier than in the film’s climax, where Emma, who also has the ability to blow powerful gusts of air from her mouth, pins the milky-eyed menace to a wall, where he hangs for a minute or two while throwing shade at the girl, arrogantly marking the time before she runs out of air and he can resume his very complicated evildoing. The patience of Jackson’s performance is of a piece with Burton’s own, as the filmmaker moves from one incident to the next with a spatial coherence that often approaches the majestic.

Pity, then, that the filmmakers hold the peculiars at arm’s length. On the one hand, it’s clear that Burton and company’s refusal to articulate any of the children’s backstories—the how and why of their arrival at Miss Peregrine’s orphanage—is an attempt to avoid easy sentimentality, to give Miss Peregrine’s Home for Peculiar Children a sense of guardedness, a stiff upper lip if you will, that honors the will of those who must hide so they may get to live another day. But on the other, this has a way of reducing the children entirely to their one (sometimes two) peculiarities, which are deployed in a seamlessly staged lockstep that leaves one wondering why the peculiars couldn’t have pulled the rug out from under their enemies much earlier.

For all of its moral anguish and aesthetic riches, the film doesn’t quite stick the landing, as the children’s release of all that is weird within them scans less as a response to everything that’s hurt them up to this point in their lives than a lazy script mandate. Burton, caught between a rock and a hard place of sorts, doesn’t fully embrace the poignancy inherent in this material, even as his restrained approach nonetheless reminds us of the distinct and peculiar coyness that was always at the heart of his best films.