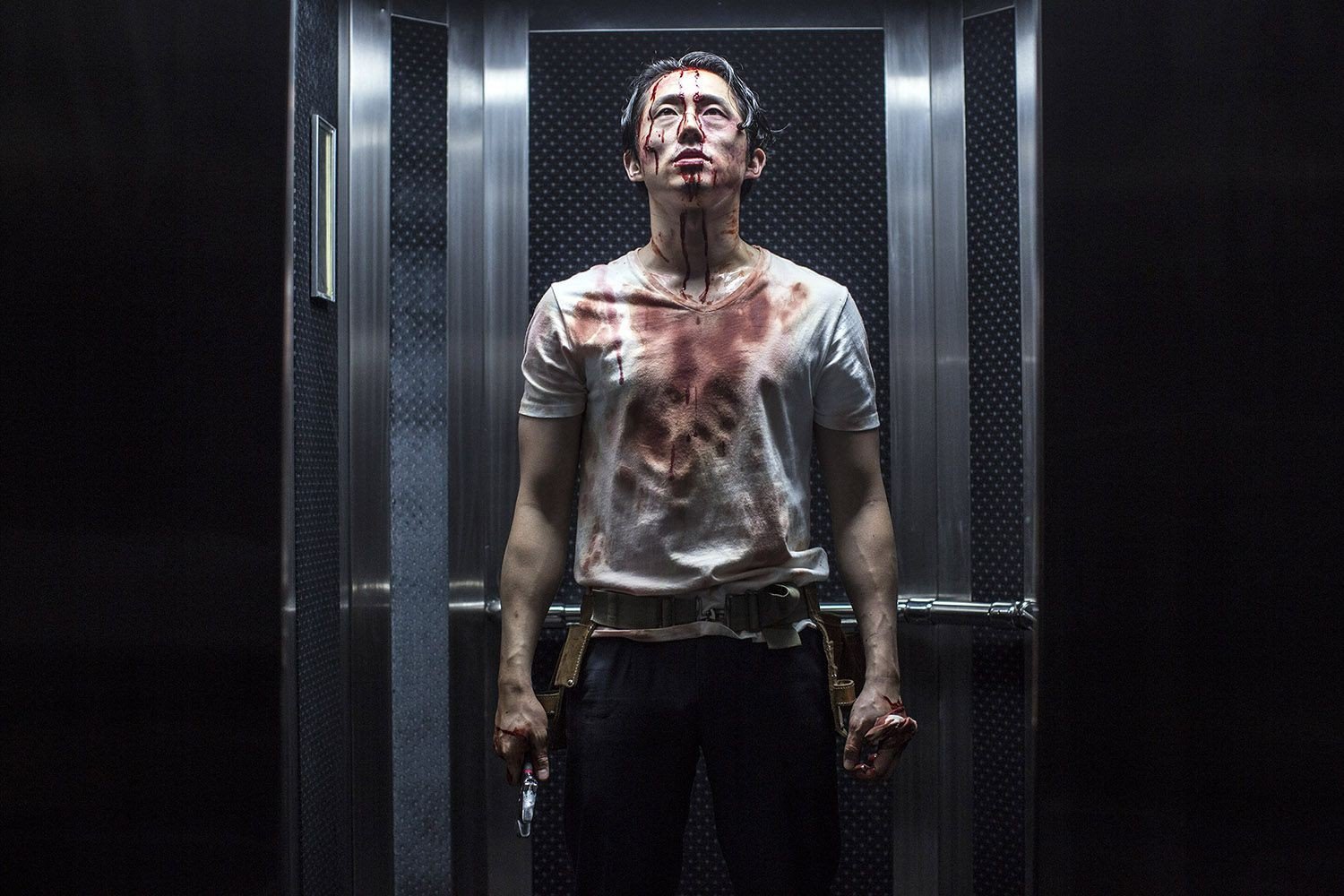 Joe Lynch’s Mayhem is a B-movie splatter fest with a high-concept plot, and when it lets loose and goes for broke with its increasingly gonzo fight sequences, it’s enjoyably insane and creative in finding new outlets for its characters’ violent impulses. But like so many shoot-‘em-up video games that repeatedly break for cutscenes, the film too often diffuses its tense energy by whipping up context. Throughout, the screenplay needlessly explicates in great detail the corporate culture it aims to satirize, as well as the minute details of the virus that causes everyone it infects to lose all their inhibitions.

Set entirely within the high-rise corporate offices of the law firm Towers & Smythe Consulting, Mayhem spends its opening act decrying the company for its cutthroat, dog-eat-dog environment. This lengthy prologue lays out the soulless greed that leads TSC to dispose of loyal employees and bothersome outsiders alike whenever they stand in the way of the firm’s (or a client’s) profitability. After trudging through this needlessly lengthy exposition, the film finally kicks into gear with the announcement that TSC is under quarantine for a mysterious virus called ID7. Soon, the employees locked inside the building are rapidly infected and turned into oversexed, hyper-violent maniacs.

At the start of the quarantine, Derek Cho (Steven Yeun), who was unfairly fired just that morning, is locked in the basement with Melanie Cross (Samara Weaving), a young woman he himself recently screwed over by not helping her combat the bank that was repossessing her home. The duo quickly reconcile their differences in order to direct their rapidly rising, virus-induced anger and revenge at those above them (literally and figuratively), commencing their ascent floor by floor toward their ultimate revenge on TSC’s crass and pompous CEO, John Towers (Steven Brand). Derek and Melanie could be video-game characters, forced as they are to stop on several different floors to wage battle with essentially lower-level bosses in order to gain access to key cards which allow them to further work their way up toward the top floor.

Mayhem is in its element when its characters are rapid-firing nail guns, carving up co-workers with power saws, or fucking in plain view. The film’s excessive and deranged escalation of violence, through rapid editing and cacophonous sound design, occasionally comes off as a second-rate imitation of the drug-infused, deliriously frenetic violence in Neveldine/Taylor’s Crank. This is in large part because Steven Yeun, even at his most unhinged, is never quite convincing as a testosterone-fueled maniac, and no amount of blood on his face makes him even a fraction as intimidating as Jason Statham.

Mayhem’s gleeful disregard for good taste is undermined at every turn as Derek and Melanie continually pause to spout gratuitous backstory, discuss their fighting strategies, or engage in unsubtle and protracted conversations with various upper-level managers about their qualms with the moral bankruptcy plaguing big business. At times, it’s as if Lynch has forgotten about the inescapable effects of the virus when characters who are at one moment savagely beating co-workers to a pulp suddenly become calm and collected enough to discuss their grievances with a cool rationality. As the film’s social commentary is as blunt and inane as its dialogue is stiff and inelegant, every break in the batshit-crazy action is a painful reminder that when Mayhem doesn’t have the pedal to the floor, it’s far too puerile to take seriously.