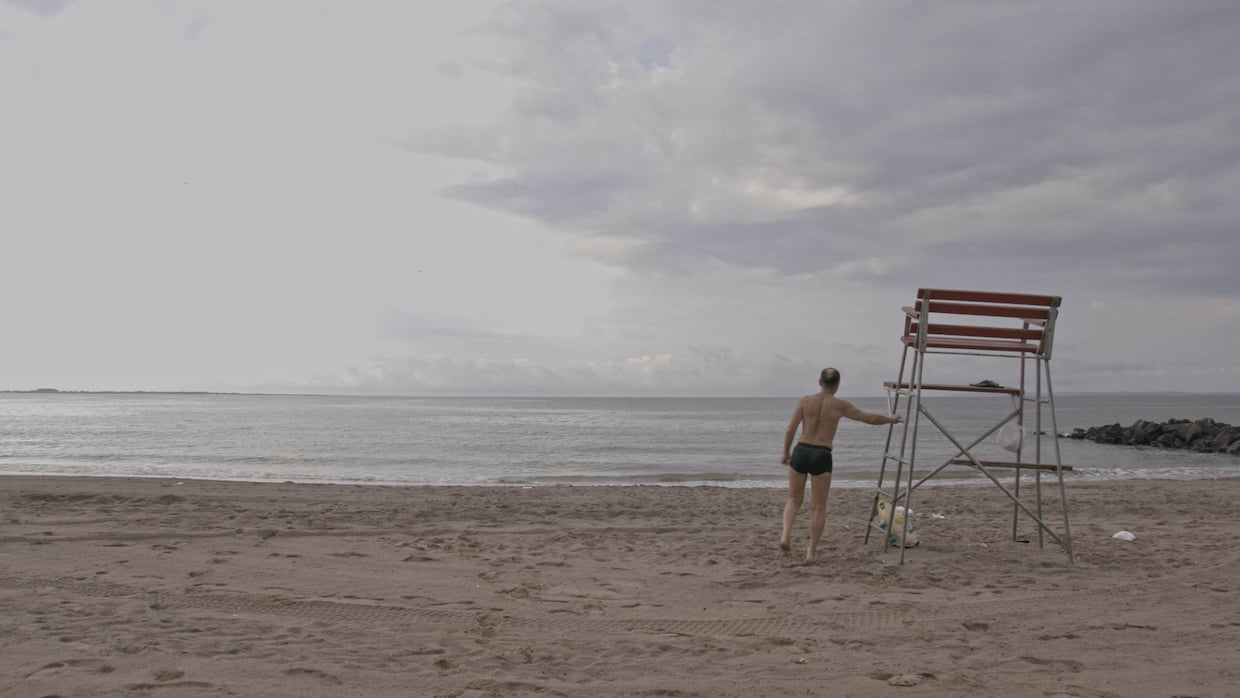 Judging from the enthusiasm of the surprisingly high number of New York filmmakers and critics this writer met in Baltimore this past weekend, the Maryland Film Festival isn’t seen as a pale shadow of Big Apple filmgoing. Rather, it’s a vital supplement to it—a program that compresses many of the festival season’s essential offerings into a manageable four-day run in an easily walkable city with comparatively chill crowds.

Those who made the commute to Baltimore for the festival this year had the chance to encounter one of the more trenchant New York-set films of recent memory in Brett Story’s The Hottest August, an essayistic documentary made in the intellectually vagrant spirit of Chris Marker. Shot in August of 2017 around a principle of “organized spontaneity,” per producer Danielle Varga, the film spans New York City’s five boroughs while adhering to a nebulous, difficult-to-define but nonetheless valuable objective: to take the temperature of the times we live in and tease out the collective mood of the country’s most densely populated area.

Willfully biting off more than it can chew, The Hottest August features rich people, poor people, scientists, skateboarders, entrepreneurs, intellectuals, barflies, artists, and more waxing extemporaneous on topics including climate change, economic inequality, automation, racism, and the future. The mood is off the cuff, conversational. A pair of women in lawn chairs joke about how their street’s rat population has swelled as a result of gentrifying construction in adjacent neighborhoods. Two former cops reframe the term “racism” as “resentment” in a sports bar just moments after demanding that no politics enter the hallowed space of the drinking hole. A loft-dwelling futurist pontificates on what the tax system might look like if the country embraced robotics instead of fearing it as a job killer. Occasionally we hear the filmmaker off screen, tersely prompting her subjects with open-ended questions, but mostly this is an ensemble of eager talkers, their openness running contrary to the old chestnut about closed-off New Yorkers.

Finding form in this seemingly disconnected mass is editor Nels Bangerter, who managed a similar feat with Kirsten Johnson’s Cameraperson. The film drifts subtly from subject to subject, pointedly using B roll not just to evocatively provide a sense of place, but to extend someone’s thought or offer counterpoint. Three streams of information exist at once: whatever opinion is being put forth by the person on screen; whatever in-the-moment perspective Story takes on her subject’s response through the questions she asks or the camera angles she chooses; and the question of how that segment ultimately interacts with the film in its final form, where images have been invested with meaning through context.

The Hottest August is a film that’s constantly “thinking,” and that thought isn’t fixed or authoritative, but rather in flux and negotiable. Story isn’t setting out to answer any pressing political issues so much as capture the tactile sense of how those issues permeate everyday settings. Hers is a form of ambient reportage that feels very welcome in our contemporary moment, when the daily barrage of information can sometimes make it difficult to recall how one felt about something two days earlier, let alone in that turbulent August of 2017.

Similarly macro in its approach is Sergei Loznitsa’s Donbass, which adopts a sprawling, vignette-driven structure as it catalogues the miseries and grotesqueries of the eponymous eastern Ukrainian territory. A region occupied by pro-Russian paramilitary forces (specifically the Donetsk and Luhansk People’s Republics) ever since the Ukrainian Revolution in 2014, present-day Donbass is a morass of conflicting sympathies and ideologies that Loznitsa doesn’t so much seek to clarify with this film as reflect in all its muddy complexity.

In fact, Loznitsa goes so far as to call into question the very possibility of the truth of this situation he captures on camera. Whenever reporters appear on screen, they’re portrayed as ineffectual stooges waiting to be chewed out as propaganda peddlers by their political opponents, and the film’s bookending sequences, set at the trailer park of a movie set, build toward a thesis statement on the dubiousness of contemporary reporting with its tendency to stage and reframe reality according to the mandates of whatever affiliation is being placated.

Cameras, we’re repeatedly reminded by the mise-en-scène, are violators, as they merely augment the dangerous power of the person wielding them. Donbass’s most harrowing elucidation of this theme comes in a scene on a public street, where a Ukrainian loyalist, tied to a telephone pole by a pair of armed separatists, endures a humiliating beating at the hands of a growing mob of passersby, one of whom decides to record the grisly spectacle with his smartphone. As Loznitsa’s camera circles the action, the heckler’s phone presses right up into the face of the prisoner, relishing in the man’s suffering, and we get the sense that the escalation of violence may have never come to pass in quite this way were it not for the spontaneous idea to turn it into a video meme. Later, the recording gets shown to a hooting crowd of Novorossiya sympathizers at an absurdly overemphatic wedding celebration, assimilating smoothly into the atmosphere of nationalist fervor.

Donbass is fueled by such collisions between the grave and the comic, a tonal oscillation mastered by Loznitsa in his documentaries and carried over here to support a vision of a society cracking under the weight of its own inconsistencies, corruption and mob mentalities. Less tightly structured than Loznitsa’s preceding fiction work, the film adopts the immersive observation of films like Maidan and Victory Day with a more active, roving camera but a similar degree of durational endurance. In one scene, Loznitsa even seamlessly integrates an extended use of documentary language into a longer fictional setup when his camera descends into a cramped and overcrowded bomb shelter, where a local host, lit by a camera-mounted source, walks us through the destitution of those living inside. As with the later street scene, the dreariness is eventually spiked by a dash of absurdism, but the counterpunch isn’t intended to lighten the mood so much as further disorient, ultimately giving Donbass an unnerving precarity that must come somewhat near the feeling on the ground.

If these two films, content as they are to revel in ambivalence, seek to grasp the experience of the now in all its bewilderment, Julia Reichert and Steven Bognar’s American Factory takes a more committed stance on an issue that’s equally topical. Fuyao Glass America, an outgrowth of a global glass manufacturer owned by a Chinese billionaire, opened in Moraine, Ohio in the shell of a shuddered General Motors plant toward the beginning of the decade, persisted financially for years while pursuing its awkward goal of unifying Chinese and American work cultures, and then inevitably ran up against controversy in 2017 when safety concerns and low wages encouraged the local employees to vote to unionize.

American Factory charts this entire compelling history with surprising comprehensiveness: When a late scene plays out as an illicit audio recording from an employee over a black screen, it stands out for being one of the only instances when the filmmakers don’t appear to have unencumbered access. But this sprawl has its downsides. Though briskly edited and tonally varied, Reichert and Bognar’s documentary skims over the surface of some of its most fascinating threads while in pursuit of a rousing decade-long tale.

The American workers depicted in the film, disgruntled by their diminished earnings and recalling a recent past with less bureaucratic oversight, too often blend into one undistinguished mass of Midwestern homeliness, and the few individuals who do get singled out for attention—a woman living in her relative’s basement and a rancher who befriends one particular Chinese co-worker—often get neglected for long stretches of time. The Chinese are perhaps even less differentiated, their insistence on dogged work ethic and company allegiance repeatedly emphasized almost to the point of xenophobia. That Fuyao chairman Cao Dewang, who weaves through the film as an amusingly oblivious villain for its majority, eventually gets a moment to fondly reminisce on China’s pre-industrial past and contemplate his own complicity in the country’s shift to globalized capitalism comes across as penance for the film’s occasional treatment of foreigners as misguided corporate drones.

What American Factory ultimately amounts to, however, isn’t an exploration of culture clash or a penetrating depiction of rust belt dejection, but rather a rallying cry for worker solidarity (in America, if not across the globe), a message it pulls off resoundingly in the final hour. Reichert and Bognar smartly detail all the insidious ways in which corporate messengers mischaracterize unionizing as a threat to individual liberty, and the populist filmmaking vernacular they employ as the union vote nears—fluid crosscutting between different intersecting narratives, plenty of emotional close-ups, a score of almost Spielbergian grandiosity—gives the documentary a genuine shot at trafficking radical politics to a relatively wide audience. If it’s any indication of future success, American Factory was one of the most well-attended screenings I went to during my time in Baltimore, but it’s a testament to the Maryland Film Festival’s outreach that healthy crowds congregated throughout the weekend. Though modest and inviting, this year’s selections exhibit a scope and ambition that should continue to draw adventurous filmgoers for years to come.

The Maryland Film Festival ran from May 8—12.