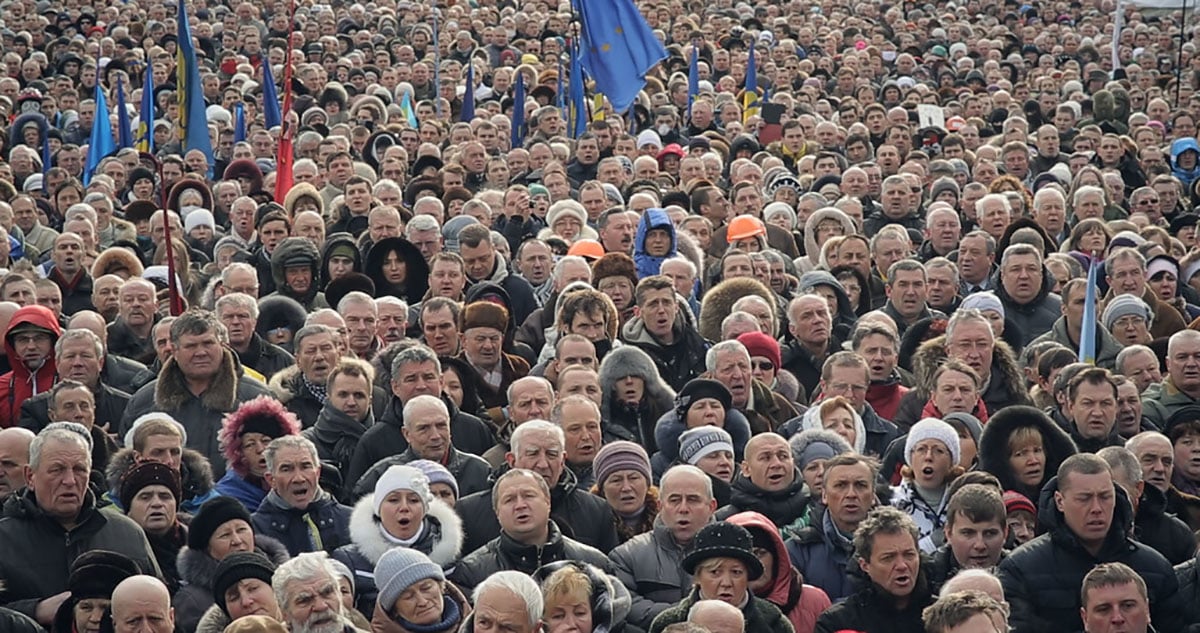 In November of 2013, Ukrainians gathered in Kiev’s Maidan Nezalezhnosti, or Independence Square, to protest President Viktor Yanukovych’s decision to rebuff a proposed agreement with the European Union in order to pursue closer political and economic ties with Russia. This was the beginning of what became known as Euromaidan, a series of antigovernment demonstrations that developed into a nationwide revolution that eventually toppled the government. Sergei Loznitsa’s documentary Maidan chronicles the first few months of the protests, as the peaceful euphoria of its early days gives way to the violence and bloodshed of the government’s attempted crackdown of the movement.

Maidan starts at the beginning of the movement, showing a packed crowd singing the Ukrainian national anthem in the eponymous square, followed by chants of “Glory to Ukraine! Glory to the heroes!” The protesters appear to represent a broad cross-section of Ukrainian society: young and old, men and women, haves and have-nots. Impecunious grandmothers stand on the frontlines of the barricades holding ikons alongside prosperous-looking middle-aged men. In these early scenes of nonviolent solidarity, Loznitsa establishes the protests as a moderate, bourgeois revolution largely carried out by sober, sensible people.

The film eschews any voiceover narration, offering only dates and a few explanatory notes between scenes to establish a skeleton chronology. It puts the viewer inside Maidan, allowing them to draw their own conclusions about the ideas and agendas espoused by the movement’s leaders and participants. The viewer gets the benefit of experiencing Euromaidan vicariously without being forced to endure the Ukrainian winter and police brutality firsthand. Loznitsa lets the revolution speak for itself. And while Maidan isn’t as heavy-handed as many political documentaries, its reliance on static long takes and off-camera action, heard but not seen, is overabundant to the point of frustration, especially during the largely undramatic opening act. Extended shots of soup kitchens and first-aid stations, mixed in with a steady barrage of largely interchangeable patriotic speeches, also feel gratuitous at first. Yet when the protesters finally clash with the government, one understands that these are the very things that sustain their resolve and enable them to carry on.

Initially, the movement comes off as a peaceful and civil protest, yet one that’s also deeply nationalistic and Orthodox Christian in its message and tone. Fiery bureaucrats, extravagant pop stars, sedate poets, and solemn Orthodox priests take turns preaching variations of the same message on the main stage: Ukraine must be allowed to pursue its course as a sovereign European nation. These civic, cultural, and religious leaders paint Euromaidan as a Manichean struggle between good and evil, with Yanukovych portrayed as a Satanic figure and Vladimir Putin as his Mephistophelean counterpart. The government is depicted as a corrupt gang of criminals standing in the way of EU integration, Ukraine’s historic and sacred destiny.

When protesters disobey a government order to clear the square, the police are sent in and absolute mayhem erupts. Activists are shown throwing rocks, Molotov cocktails, and other projectiles against the police, who initially try to clear the square with smoke bombs, clubs, and rubber bullets. This outbreak of violence is a stark contrast to the euphoric demonstrations that preceded it, highlighting the contextual value of the film’s peaceable opening scenes. Moaning bagpipes and raging fires add to the carnivalesque sounds and imagery of the altercations, as the film’s visual palette shifts abruptly from the kind of joyous celebrations found in the work of Pieter Bruegel to the nightmarish landscapes of Hieronymus Bosch. Ending with makeshift funerals for some of the 100-plus protesters killed during the clashes, Maidan closes on an ominous note, reminding viewers that they’re witnessing an ongoing conflict, one that continues to claim hundreds of lives, with no clear end in sight.