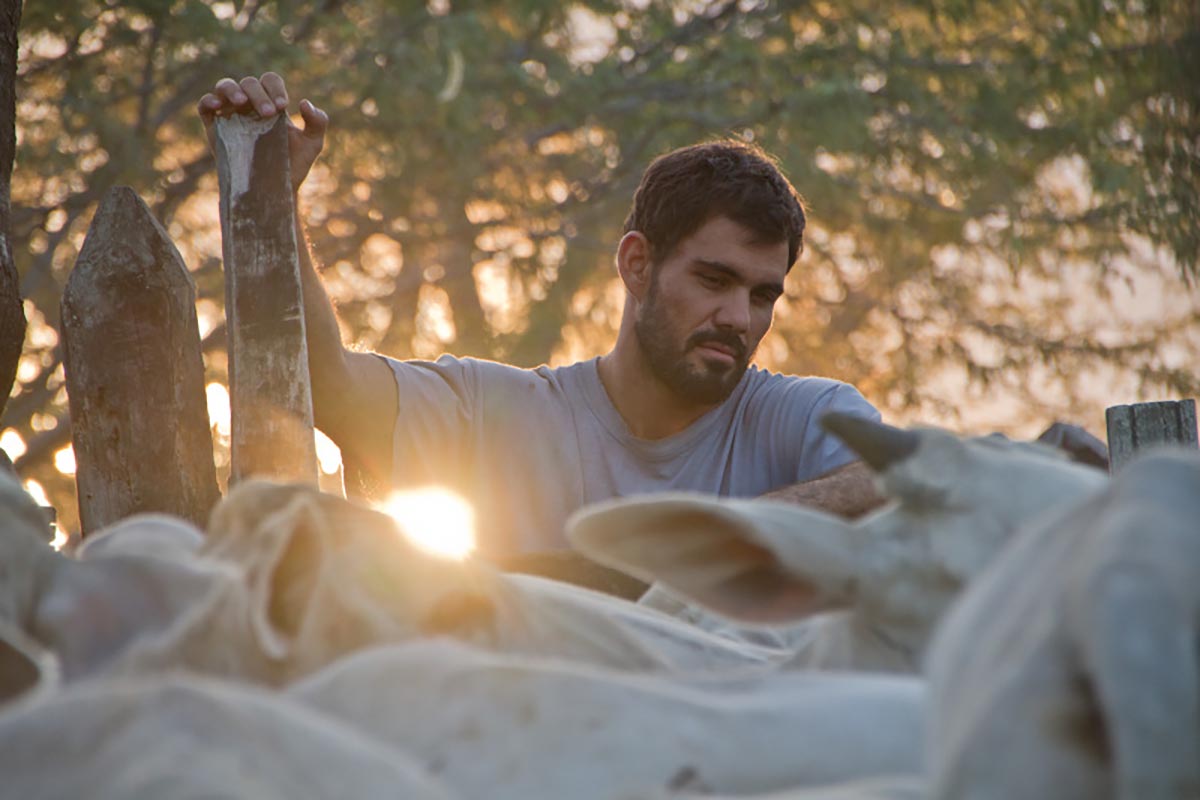 Inside the Palais des Congrès on opening night, the 15th Marrakech International Film Festival thrums with subdued, but still palpable, anticipation as the members of the jury, including its president, Francis Ford Coppola, take the stage one by one and announce the festival’s opening—each member in their own native tongue. The moment bespeaks the festival’s aims as a cultural event, bringing first and second films from promising directors across the globe into the same space for a 15-film competition.

At a press conference the next morning, a question about the lack of female filmmakers in competition (only one) sparked a string of responses to questions of equality among the field. Jury member Olga Kurylenko took issue with the remark, saying that “the films [here] have been chosen for a reason and the outcome is just a coincidence.” The irony is that the festival’s first two films, Steel Flower and Paradise, though directed by men, feature a distraught female protagonist in nearly every single scene. Thus, while female filmmakers might be in short supply, female subjects initially seem common.

Yet the line of questioning persisted a day later when jury member Anton Corbijn, responding to a question about Norway’s recent mandate that says 40% of films have to be made by female directors, called the idea “a bullshit thing for me. I think you should give people all opportunity to become a film director, male or female, [but] if there are less women wanting [to direct], that percentage would be crazy. If you have 100 directors and only 10 females, then they get the 40%. That doesn’t make sense to me.”

Sensible or not, gender questions have informed the Marrakech festival at seemingly every turn, especially in the films, with titles like Closet Monster and Lingering Memories, helmed by female filmmaker Keiko Tsuruoka, confronting identity politics through the auger of subverted coming-of-age tropes. The real gender-lit firecracker, however, is Gabriel Mascaro’s Neon Bull, which features a scene of a man masturbating a horse not for shock value, but for its conveyance of the man’s un-erotic and practical dealing with bodies, be they his own, other humans, or animals, since he’s attempting to extract the semen in order to breed his own horses.

The act, staged in long shot, is less shocking than perfunctory because of its context. The instance also foreshadows a scene with a group of men showering where their nudity is viewed in a functional, distant manner. When a woman waxes her public hair in another scene, she does so distractedly and is shot from the side, with her genitalia obscured by her thighs. Whomever’s genitals are shown or engaged, the film has little interest in lingering on natural bodily formation as a source for titillation, though that entire premise, carefully laid out in remarkable detail by thematic juxtapositions, is challenged by a climactic one-take sex scene.

Set in Brazil on and around a rodeo/ranch, the film follows Iremar (Juliano Cazzarré), who tends to his cattle with a similar love and attention as Mascaro treats the man, so that when Iremar playfully stomps a bull while hopping a fence to smell some sample perfume, one senses Mascaro toying, though not sadistically, with audience expectations as to the sensorial qualities that lay at the end of the film’s amorphous and slow-burn road.

Neon Bull introduces several female characters as well, including a young girl, Cacá (Alyne Santana), and her mother, Galega (Maeve Jinkings). Both have long hair and a thin frame, not unlike Júnior (Vinícius Oliveria), a newly hired ranch hand who takes sexual interest in Galega, though Mascaro disguises its absolute confirmation through a darkly lit sex scene that’s shot from behind Júnior’s back so that, for a moment, one thinks Galega could be having sex with her own daughter. In another segment, Iremar designs a skimpy costume for Galega, completed by a large horsehead mask, and asks her to dance for the group of ranch hands, which Mascaro films in stark, monochromatic red. The scene is treated as an appropriately surreal moment of trans-species play, eroticizing a woman whose dress lends her bestial connotations.

Mascaro emphasizes these bodily confusions through stylized long takes that track characters walking across fields, sitting on the ranch, or having sex in a factory, but the shots thankfully service thematic links being made on screen, rather than merely indulge the sort of formal flexing that’s become a dime a dozen in “impressive” arthouse filmmaking. What’s impressive about Neon Bull isn’t its kinetic trickery or sadistic proclivities, but its genuine interest in pushing characters toward extremes without conventionalizing or exploiting their situation. In that sense, its thematic and formal execution invites comparisons to the equally caustic work of Lav Diaz.

Less caustic, but still stirring, is Park Suk-young’s Steel Flower, a Dardennian piece that strips narrative depth from the Sisyphean march of Ha-dam (Jeong Ha-dam), a drifter who lugs her wheeled suitcase through Seoul and Busan in search of a job. Actually, she less lugs than dances with her suitcase, since Park initially films scenes from a low level as the bag moves and gyrates in several directions, almost as if the suitcase, rather than Ha-dam, is the film’s subject. Perhaps it is, in some regard, especially after it becomes increasingly clear that without an address or cellphone, jobs are hard to come by, forcing Ha-dam to a life of undesired and persistent transportation.

Yet Park circumnavigates relying on Ha-dam’s socioeconomic failures as the film’s dead-end lament by interspersing other curious narrative elements, like Ha-dam’s increasing interest in acquiring a pair of tap shoes. At one moment, she peaks into a nearby classroom and sees a group of young girls, all dancing in a line, as if in a military training exercise. While the film never addresses militarism explicitly, the thread is complemented by a scene where Ha-dam’s failure to gain employment results from her piercing, drill-instructor scream, rather than warm intonation, of a common greeting.

Neither fit to be a hostess nor a wanderer, Ha-dam relinquishes her spirit and drive after meeting consistently abrupt roadblocks, especially once she become enmeshed in knock-down, drag-out fisticuffs with a female restaurateur who accuses her of impropriety. Park leaves Ha-dam with a pair of tap shoes and not much else in a final scene on a pier, as Ha-dam taps to the increasingly violent rhythms and crashing waves of the sea. The scene alone adds a guerilla resilience to Steel Flower, a film worthy, if only marginally so, of its titular ironic paradox.

Paradise, another ironically titled film, bests Steel Flower through its more complicated and intensive sense of political antipathy, not least because it was shot illegally on the streets of Tehran, though many scenes are restricted to interiors of classrooms or buses. First-time feature director Sena Ataeian Dena makes acute visual choices throughout, opening with a black screen for several minutes while a conversation plays out in voiceover. The decision only amplifies the film’s illegality, its status as a persona non grata within the eyes of Iranian bureaucracy by initially refusing to reveal itself at all.

“Go with God,” a woman tells 25-year-old Hanieh (Dorna Dibaj) during these moments, a sentiment that Dena complicates throughout by asking whether God lies in the present or past of the Iranian body politic. These questions are bound up in a chronologically fractured narrative involving two missing girls, though Sena rightfully minimizes this thread’s potential for more generic pathos or suspense.

The film’s real interest lies in dualities between nation and self or nation and other. For example, a large banner hangs from a distant building with the words “down with the USA,” where dropped bombs merge with the flag’s stripes. Similarly, the camera pauses on a young Iranian boy wearing a Zinedine Zidane soccer jersey, imploring the viewer’s curiosity regarding potential cultural overlap between Western factions of grandiose mythologizing and Iranian inclinations toward seclusion and homogeneity. And that homogeneity, for Hanieh, starts to looks progressively less and less like any discernible God, since isolation only breeds more trouble.

Finally, as bursts of music spark an inspired dancing scene and the sound of a kickball hitting a window at first registers as an exploded bomb, Paradise addresses how living in consistent fear of harm within one’s native land constitutes a tangible nightmare. The fitfully dissolves Hanieh’s struggles into a purgatory between life and death where, as one character says of knowing what lies on either end of the spectrum: “No one has ever returned to tell us what comes after.” Nor, perhaps, do they want to.

Review: In the Heart of the Sea