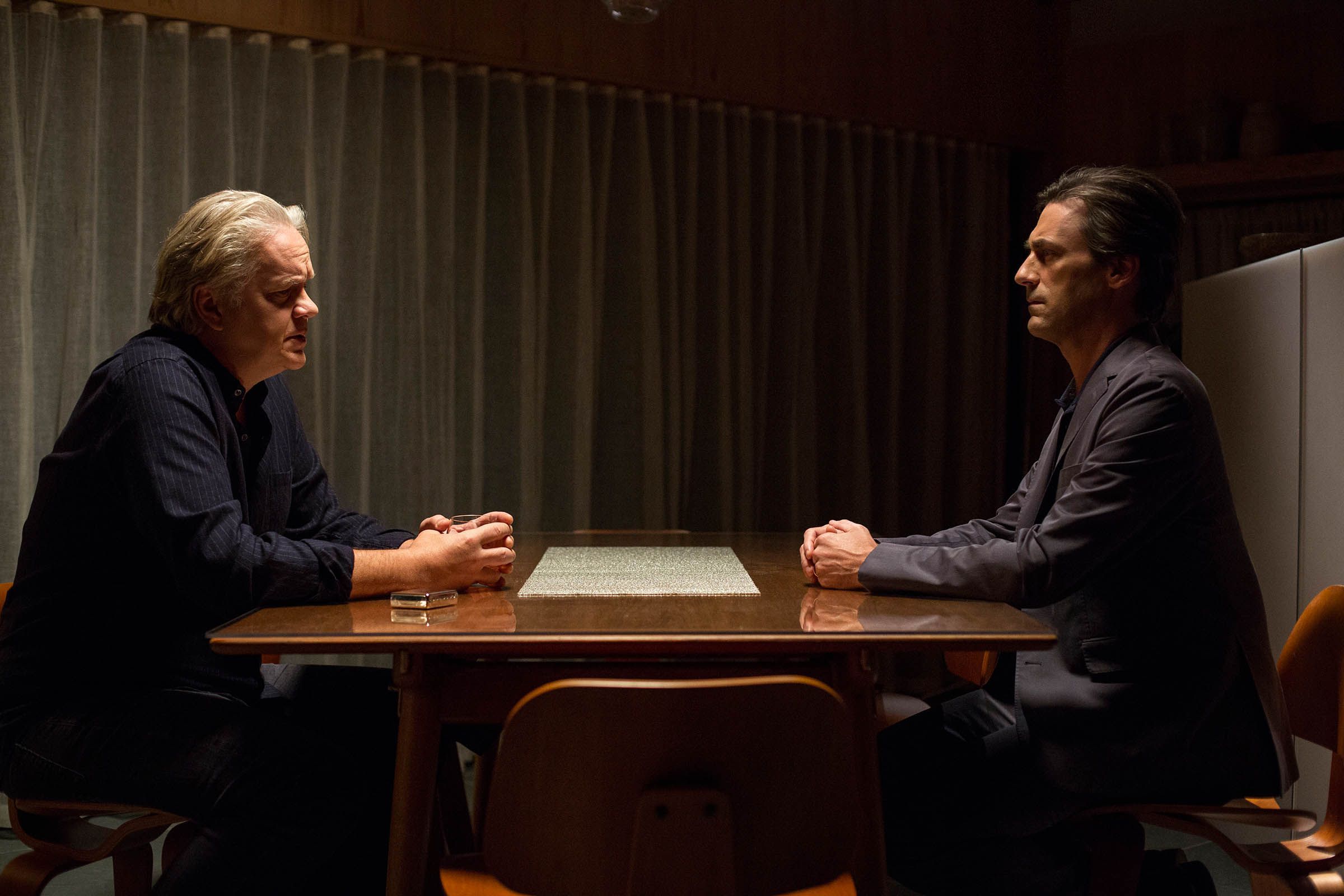 Based on a play by Jordan Harrison, Michael Almereyda’s Marjorie Prime is occupied with an existential mathematical equation: that memory plus language plus technology equals reality. Underneath a story of a family in crisis is an analysis of the subjectivity of remembrance.

Sharing a scotch one evening while waiting out a rainstorm at a country club where her parents, Marjorie (Lois Smith) and Walter (Jon Hamm), were once members, Tess (Geena Davis) reminds her husband, Jon (Tim Robbins), of how William James described memory, which has been scientifically affirmed: It doesn’t resemble a well or a filing cabinet, but a copy of a copy. Each time we access a memory we’re remembering the last time we remembered it, rather than the event under contemplation. All forms of perception—which cumulatively forge both individual and social histories—are fluid.

Marjorie Prime is a wrenching chamber drama, composed of episodes that are strung together with a subtly intricate thread of evolving verbal recollection, which symbolizes the fantastic qualities of memory at large. Certain phrases bob up and down throughout the dialogue, signifying barely submerged secrets. Marjorie frequently speaks of Toni, the poodle the family had years ago. Yet there were actually two Tonis as well as two children, a perception which gradually comes to the film’s fore via phrases and scraps of observation, such as a mental image of a dog with sand in its hair. Correspondingly, a nostalgic memory of Walter and Marjorie in Central Park looking at saffron flags is revealed, via flashback, to have its basis in a more ordinary moment of domestic uncertainty. Or perhaps it’s the flashback, rather than Marjorie’s description of the flags (which is later recalled by Jon and imbued with his own personal mythology), that should be distrusted.

Mapping the intersection between history and emotion, Almereyda finds himself in the terrain of Alain Resnais. There’s also more than a hint of Ingmar Bergman in this narrative of a family in a rarefied yet chilly home, which D.P. Sean Price Williams renders as a cage of earthy colors engulfed by skies of celestial light—a realm of interior fantasy. The miracle of this film is that one never catches Almereyda and his actors straining for pathos or intellectuality. This lucidity is an Almereyda specialty, as his films often use high concepts to broach themes of alienation without succumbing to self-pity or maudlin sentimentality. Almereyda makes introverted films about the process of rationally quantifying loneliness so as to transcend it without revealing vulnerability, understanding this poignant quest as a fool’s errand.

Marjorie Prime also has a high concept, its plot pivoting on advanced holograms which allow people to indulge the illusion that they’re speaking to deceased loved ones. Walter has been long dead, but “Walter Prime” allows Marjorie to speak with him as he was long ago: a handsome, devil-may-care player with Don Draper’s sense of flatly pregnant vocal intonation. These holograms become “smarter” the more one talks to them, evolving to act more human. A despairing absurdism often arises from Marjorie’s conversations with Walter Prime, as he’s a machine designed to nurture an echo chamber of memory for Marjorie, who uses him to rewrite her past into a glorious new tapestry of pop mythology. Walter Prime’s pragmatic attempts to keep up with Marjorie often scan as parodies of theatrical dialogue and of pop banalities.

Tess is gradually revealed to be the center of Marjorie Prime. Feeling ignored and unloved by her mother, forever eclipsed by her dead brother, Tess plays the role of the classically sensitive and painfully intelligent introvert, which Davis dramatizes with an emotional nakedness that’s revelatory. Davis and Robbins play Tess and Jon’s conversations as classical duets between shy people who try and fail to avoid the heartbreak and disappointments of their elders, informing these characters with a painful conviction: that they’re drab individuals on the sidelines of Marjorie and Walter’s legend-hood, akin to mere footnotes in a more interesting narrative.

In a profound rhetorical exchange, another Prime pinpoints the core of Tess’s insecurities, suggesting that she feels her predictability divorces her of humanity. The Primes, then, reflect our own suspicion that we aren’t real, that our lives aren’t worthy of contemplation, and the control they allow us to have over them is meant to theoretically hand us the reins to our own existence. But Tess and Jon’s decency is shown to be a prison of self-loathing, in which they can only see themselves as failures—an intellectual prison from which no fantasy, no retrospective memorial edification, no Prime, can offer refuge.