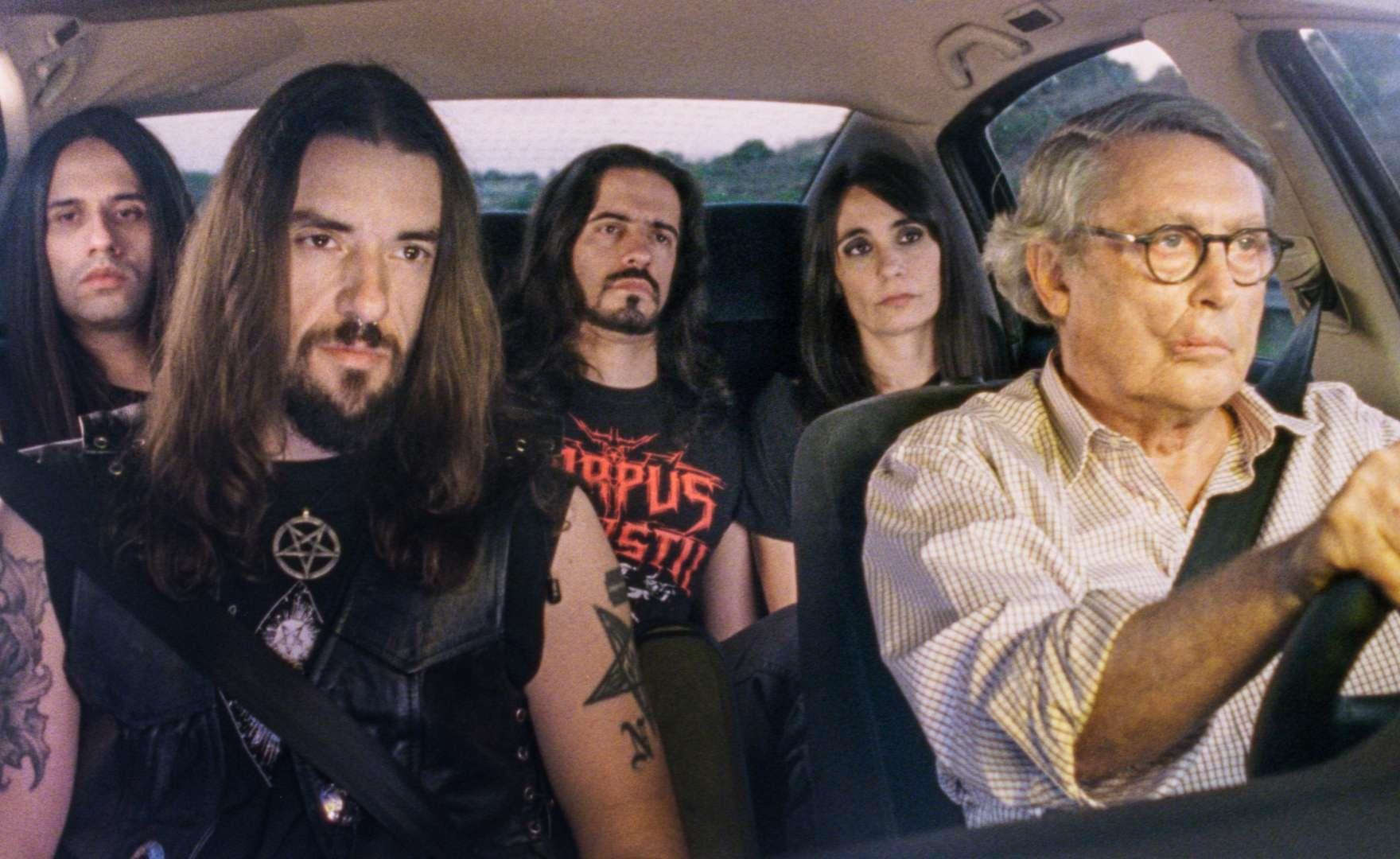 Locarno often leans into its reputation as Europe’s most unapologetically highbrow summer festival, but a striking number of the titles that appeared in the festival’s competition slate this year operate in a playful, breezy register. Such as João Nicolau’s Technoboss, an unwaveringly deadpan musical comedy about an aging divorcé, Luís (Miguel Lobo Antunes), nearing the end of what seems to have been a tedious career selling and maintaining integrated security systems. His existence is far from enviable, as he’s past his prime as a salesman and baffled by modern technology, while his primary companion is his cat. To compound the overriding sense of ennui, Nicolau presents a decidedly drab vision of Portugal, all cramped offices, cluttered shop floors, and soulless hotels.

Luís, though, remains optimistic, as evinced by his tendency to burst into song as he drives between assignments, and by the quietly determined way in which he attempts to regain the affection of an old flame, Lucinda (Luisa Cruz), despite her apparent disdain for him. Antunes, in his first professional acting role, is compelling, with a perpetual twinkle in his eye that hints at a rich inner life. And while his vocal range is limited, to say the least, he brings an earnestness to the musical numbers that elevates them above mere quirky window dressing.

Ultimately, the film is too narratively slight and tonally monotonous to justify its two-hour running time. One running joke in particular, involving a smarmy executive who’s frequently heard off screen but never seen, runs out of steam in the final act. And yet, when viewed in close proximity to the likes of Park Jung-bum’s dreary crime drama Height of the Wave, which bafflingly won this year’s special jury prize, Technoboss is a breath of fresh air.

Runar Runarsson’s Echo isn’t exactly a laugh a minute: An early scene depicts the preparation for a child’s funeral, while subsequent sequences revolve around police brutality, domestic violence, and the lasting impact of childhood bullying. But it’s delightful to behold Runarsson’s sly execution of a formally bold premise. Clocking in at 79 minutes, the film is composed of 56 standalone vignettes connected by a Christmas setting. The constant narrative shifts are initially jarring, but recurring themes begin to emerge: rising social inequality in the aftermath of the financial crisis; the impact of modern technology on traditional ways of life; the drabness of winter and its impact on the country’s collective mental health.

Yet while the film’s underlying tone is melancholic, there are frequent bursts of pure comedy, from the absurd spectacle of abattoir workers bopping along to a jaunty rendition of “Jingle Bells” amid animal carcasses, to a farmer and her partner earnestly squabbling about the state of their relationship as they document the mating habits of their goats. Humor also arises through the juxtaposition of scenes. The haunting image of a boy in a coffin is followed by a clinical shot of a similarly motionless adult body, and it takes a moment to register that we’re looking at not another corpse, but rather a man lying under a tanning lamp. Later, a heartwarming kids’ nativity scene cuts abruptly to a shot of bikini-clad bodybuilders performing in a harshly lit, half-empty auditorium.

However, it’s Echo’s sincerity that really impresses. One sequence, in which an emergency services operator calmly reassures a child reporting a violent altercation between his parents, is remarkable in the way it hooks the viewer emotionally in mere seconds. The film ultimately coheres into a vivid portrait of contemporary Iceland that’s equal parts bleak and beguiling.

A Voluntary Year, co-directed by Berlin School alumni Ulrich Köhler and Henner Winckler, is a similarly bittersweet affair, walking a fine line between raw domestic drama and precision-engineered comedy of errors. Sebastian Rudolph stars as Urs, an off-puttingly pushy small-town doctor intent on packing his teenage daughter Jette (Maj-Britt Klenke) off to Costa Rica to volunteer in a hospital. Jette, though, would rather spend her gap year at home with her boyfriend, Mario (Thomas Schubert), who seems harmless enough but has been written off as a poisonous influence by Urs. A sequence of mishaps in the thrillingly unpredictable opening act gives the young couple a brief chance to take charge of their own futures, but the decision Jette hastily makes pushes her strained relationship with her father towards breaking point.

Köhler and Winckler do a fine job of eliciting sympathy for their deeply flawed characters. Jette is maddeningly indecisive and prone to overly dramatic outbursts, but her brash exterior masks deep-seated vulnerability. Meanwhile, it’s easy to share Urs’s disbelief that Jette should be even remotely infatuated with the woefully uncharismatic Mario, but the boy’s earnestness ultimately proves strangely endearing. Urs is much harder to warm to, as he’s the quintessential big fish in a small pond, clearly used to throwing his weight around and getting his own way. To add insult to injury, his handling of sensitive situations is often jaw-droppingly misjudged. And yet, the viewer is given a strong enough sense of his good intentions to at least partially root for him as he attempts to patch things up with Jette.

While it may not do this modest film any favors to make the comparison, there are shades of Maren Ade’s masterly Toni Erdmann in The Voluntary Year’s nuanced depiction of a fraught father-daughter relationship, and also in the way the filmmakers play the long game when it comes to delivering comic payoffs. An enigmatic narrative thread involving a migrant boy has a laugh-out-loud resolution that also neatly paves the way for a moving final scene.

Review: Angel Has Fallen Paints an Incoherent Picture of an Action Hero