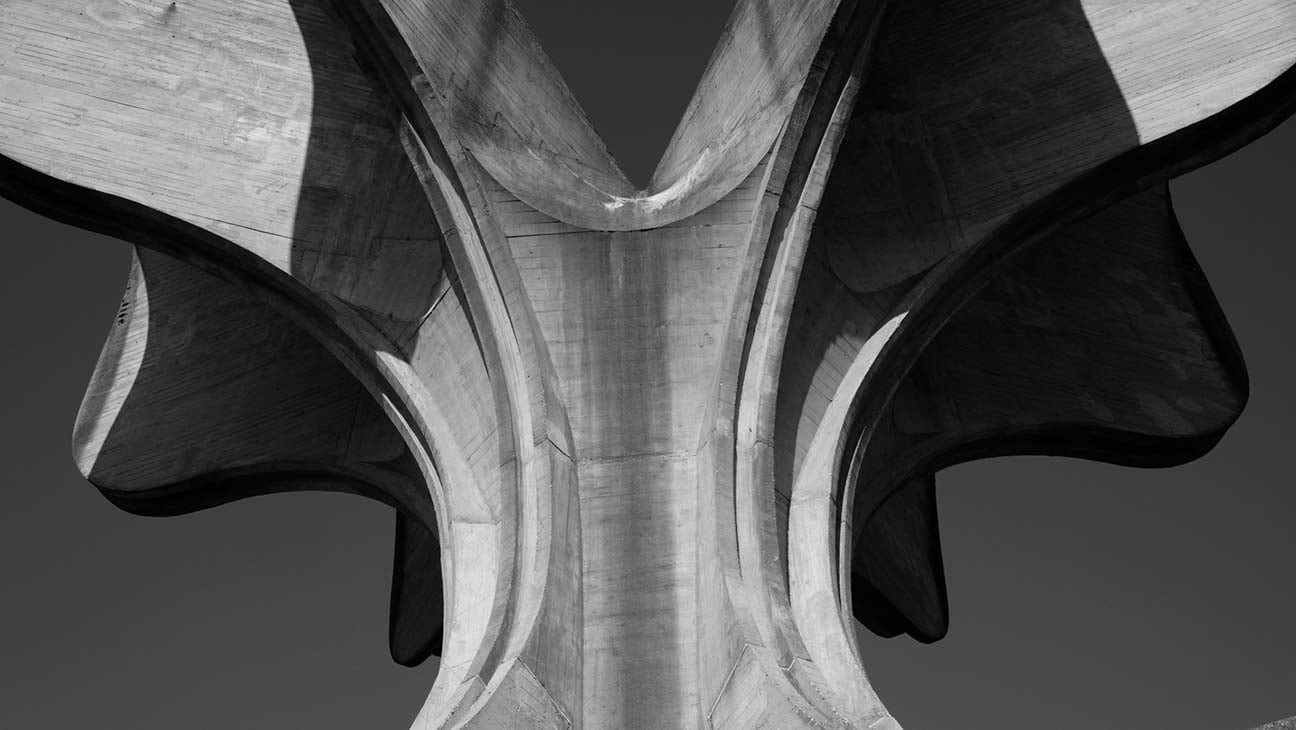 “Listen patiently,” counsels Tilda Swinton at the opening of Last and First Men—an unspoken invitation to watch with equal patience. Jóhann Jóhannsson’s posthumous feature-length directorial debut is an existential head trip that conjures up a sense of cosmic time. Based on Olaf Stapledon’s 1930 sci-fi novel, the film takes the form of a transmission from “two thousand million terrestrial years” in the future. Voiced by Swinton and backed by shots of otherworldly structures set to ambient music, humanity’s descendants describe the advances of their culture on Neptune, wracked by “huge fluctuations of joy and woe,” as well as the expanding star that will inexorably snuff them out.

Known for his soundtracks to such films as Denis Villeneuve’s Arrival and Panos Cosmatos’s Mandy, Jóhannsson was foremost a composer, and Last and First Men is very much a composer’s film. The music by Jóhannsson and Yair Elazar Glotman never feels secondary to the images, which are themselves organized like an extended music video, with an eye toward visual patterns and motifs. As ambient as the music, they consist almost entirely of long takes of Yugoslav monumental architecture (well-chosen for associations with a failed utopia) shot on black-and-white 16mm. Swinton’s voiceover, all the more enigmatic for its deadpan tone, handles what story there is. Devoid of plot beats to mark the film’s progress, Last and First Men’s 70 minutes achieve a kind of elasticity, dilating and contracting as the mind wanders, spurred on by the prescience of Stapledon’s ideas or the architectural abstraction on display.

The cubiform, jutting, or sinuous forms of these structures are shot, for the most part, in order to render orientation and scale undiscernible, transfiguring them into the “geometrical mountains” of future buildings as described by the narration, or concrete manifestations of music. In some shots, the camera glides along their curves and through their apertures like a hovercraft probing the surface of an alien world. In others, it remains perfectly static, absorbed in meditation, and the only movement comes from clouds churning in the sky, or from the grain and flaws on the celluloid itself. Some takes are so long, so still, that when they cut, high-contrast shapes remain on the retina as an afterimage, mimicking a superimposition. The combination of voiceover and black-and-white cinematography, meanwhile, lends the film an almost documentary aesthetic, driving the urgency of its existential themes.

Watching Last and First Men is like contemplating an abstract painting, except that it slowly accumulates changes, almost imperceptibly, until suddenly a new perspective leaps out at us. This is exemplified by a sequence in which the camera tracks along a road toward a bank of mist, and just as the contours of a structure begin to resolve, the image and music drop out, and in this moment you may wonder if the film has stopped playing. This push and pull between gradual buildup and apocalyptic rupture allows Last and First Men to infiltrate the mind and recalibrate our sensitivity to time. Then, too, it attunes us to the theme of extinction, a fate the “last men” seem determined to prepare us for.

Last and First Men proves that filmmakers don’t need a vast budget or cast and crew to make something evocative of vastness. That said, had the visuals been too explanatory or the music overbearing, the narration could all too easily have subsided into a tedious lore dump. Instead, the film manages to siphon the anxiety over the existential crises that we face, declaring its “loyalty to the forces of life embattled against death”—not by ignoring death’s inevitability, but by situating it within an all-encompassing vision of the cosmos.

Review: The Tender Bar Bangs a Ham-Handed Drum for an Uneventful Life