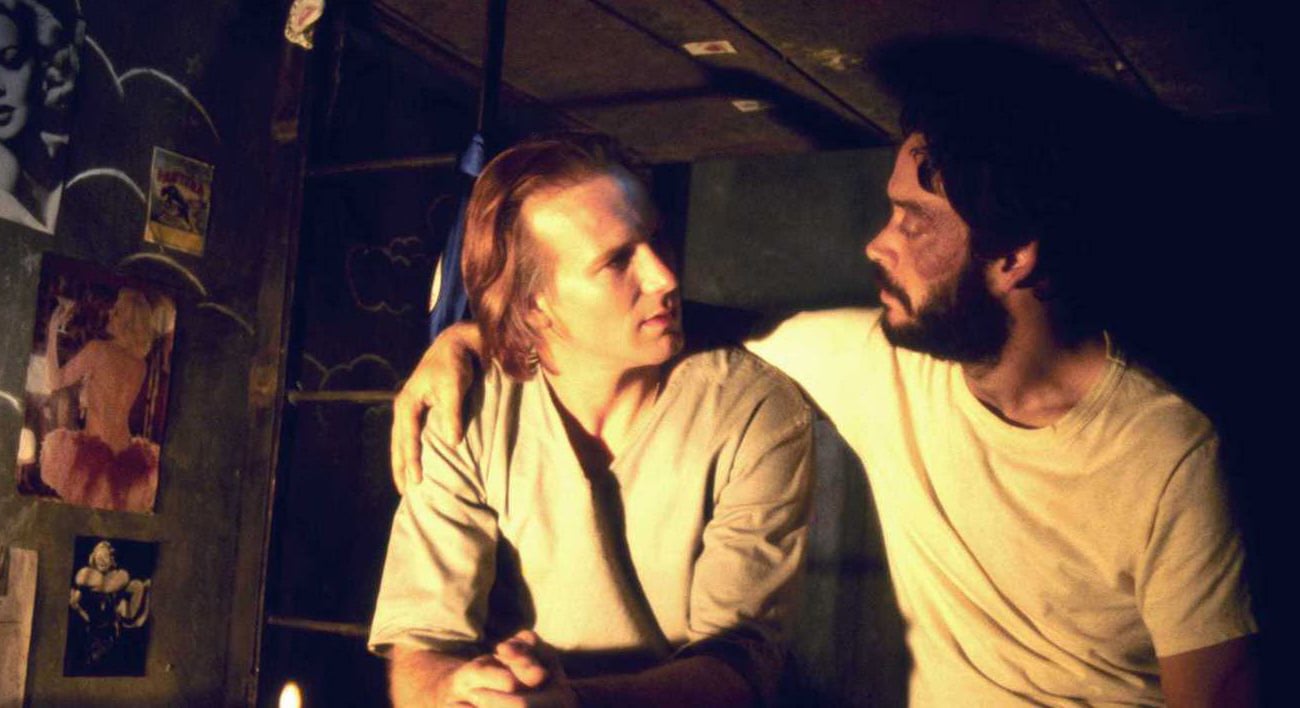 Having been translated into a play for stage and radio, a musical, and the much lauded film directed by Héctor Babenco, Argentine writer Manuel Puig’s book Kiss of the Spider Woman has a theme that endures throughout all its various incarnations: that of human dignity and compassion surviving within a society that denies it. The archetypal characters of Molina, a gay window-dresser who escapes into the pop fantasies of the women’s pictures he so enjoys, and Valentin, a bearded revolutionary whose life has been devoted to “the struggle,” are an odd couple in their prison cell who tolerate each other’s differences. Through their shared experiences, Valentin opens up to a softer, gentler worldview while Molina realizes that meaning in his lonely, falsely romanticized life can only be achieved through developing a philosophy of his own, in this case considering the possibility of being a part of Valentin’s revolution. One can easily see how the book, which is almost entirely composed of dialogue between these two characters, can translate to the stage and screen, since the situation is inherently dramatic, and the characters are so grounded, believable and dimensional.

The film contains all of those ingredients from the novel, which worked so well in the first place, and does something bizarre with them. This is not to say the movie version fails; on the contrary, the prison cell as depicted on screen (as opposed to the abstract place in the novel, which feels like a vacuum when we only have the dialogue of Valentin and Molina to go on) becomes a microcosm of their worlds. Valentin’s side of the room is austere and devoid of bourgeois comforts, while Molina’s is the best he can do with a splash of colorful things and a spattering of old black-and-white movie postcards. The movies that Molina describes to Valentin become actual films-within-a-film, and the female protagonist of each of those stories is played by the striking Sonia Braga, who also plays Valentin’s upper-class girlfriend Marta in a flashback. Molina’s movies are over-the-top, with expressionistic noir lighting in contrast to the naturalistic grimness of the prison cell. All of these translations from book to screen are satisfying, since they all seem to be drawn from Puig’s themes and ideologies, which were playful yet committed. When reading him, or seeing the film, one feels like a soap opera is unfolding, which is perhaps why musicals and movies work for the material; it’s broad, pop entertainment that also says something about how we should behave. The political elements are present, but not propagandistic, so Spider Woman doesn’t feel like a plug for Amnesty International, or a false plea to tug at liberal heartstrings in the name of a good cause. The book, the film and the musical all seemed to be going for something more universal.

The continued public fascination with the movie is that it was made during a politically conservative time, and for a movie about a feminine gay man and a socialist who learn to love and respect one another, it seems to have been tailored in such a way that Molina’s gayness is like a straight guy’s imagination of what a girlish man should be like. William Hurt, as Molina, gives a strange performance, since he is playing Molina as if he were a woman, and it’s unlike any gay man or woman or drag queen I’ve ever seen or known. Molina is more like a benevolent space alien with maternal instincts. As a straight, left-wing journalist, of course I’ve always identified more with Valentin, and Raul Julia’s sensitive, conflicted performance. The very film seems to be coming from Valetin’s perspective, and Babenco strikes me as a very heterosexual filmmaker. When Molina tells the stories of his beloved movies, Valentin imagines the woman he loves, and the very climax of the movie involves the revolutionary having dreamlike contact with this beguiling woman of his fantasies—with even Molina acting butch, getting involved in the cause, and considering making a spy-movie phone call to the rebels, as if Babenco were saying, “This is how to be a man!”

That heterosexual energy is almost squeamish when it comes to representing gay love on screen, so when Valentin and Molina eventually make love, it’s done as though this film, made in 1985, were still under the Hollywood Code of the 1940s and ‘50s. Valentin strips off his shirt, then leans over and blows out a candle, and we cut to the morning after. Far more intimate and touching is the sequence where the captors are poisoning Valentin, and the food troubles his stomach so much that he shits his pants, and Molina gently cleans up after him. “It doesn’t disgust you?” Valentin keeps repeating, puzzled at the benevolence. The moment of the on-screen kiss between Molina and Valentin is touching not because of its sexuality, which may have been shocking at the time, but because it is a token of kindness. “Don’t allow anyone to humiliate you,” Valentin says. “No one has the right to do that to anyone.”

The message transcends what might be seen as limitations in this film, and yet those limitations create new fissions that are pretty compelling. In much the same way audiences are fascinated by E.T., Valentin and Babenco are drawn in by Molina’s open kindness. Yet Hurt’s performance still transforms Valentin into The Other. If it feels grounded in reality, it’s because Hurt invests a lot of method acting and tics into the role, a sense of believability in that the actor knows the character, knows the clothes, probably knows where every item of silverware and every hidden treasure is in the cell. For his level of dedication, he won an Academy Award, and perhaps deservedly so. Julia’s work went unrecognized because he doesn’t get to be as colorful, yet he projects a wary intelligence and a sense of genuineness; you feel that you are watching that rare thing, a decent human being, in all its idiosyncrasies. I suppose he is where Puig’s attractive notion of an ideal man to love meets Babenco’s notion of the hero straight men could identify with. That Babenco and Puig were able to find a common ground in this man is, in a way, as powerful as Molina and Valentin’s union. For those who have read and enjoyed the book, the film offers these unique pleasures, and for the many who have never read Puig, I’m sure they can still feel that lyrical, eccentric dynamism somehow inherent on screen.

Lichman & Rizov “Live” at Grassroots Tavern: Episode 18, “This Podcast Gets a 48” with Mike D’Angelo

An Altar to Love: Éric Rohmer’s The Romance of Astrea and Celadon