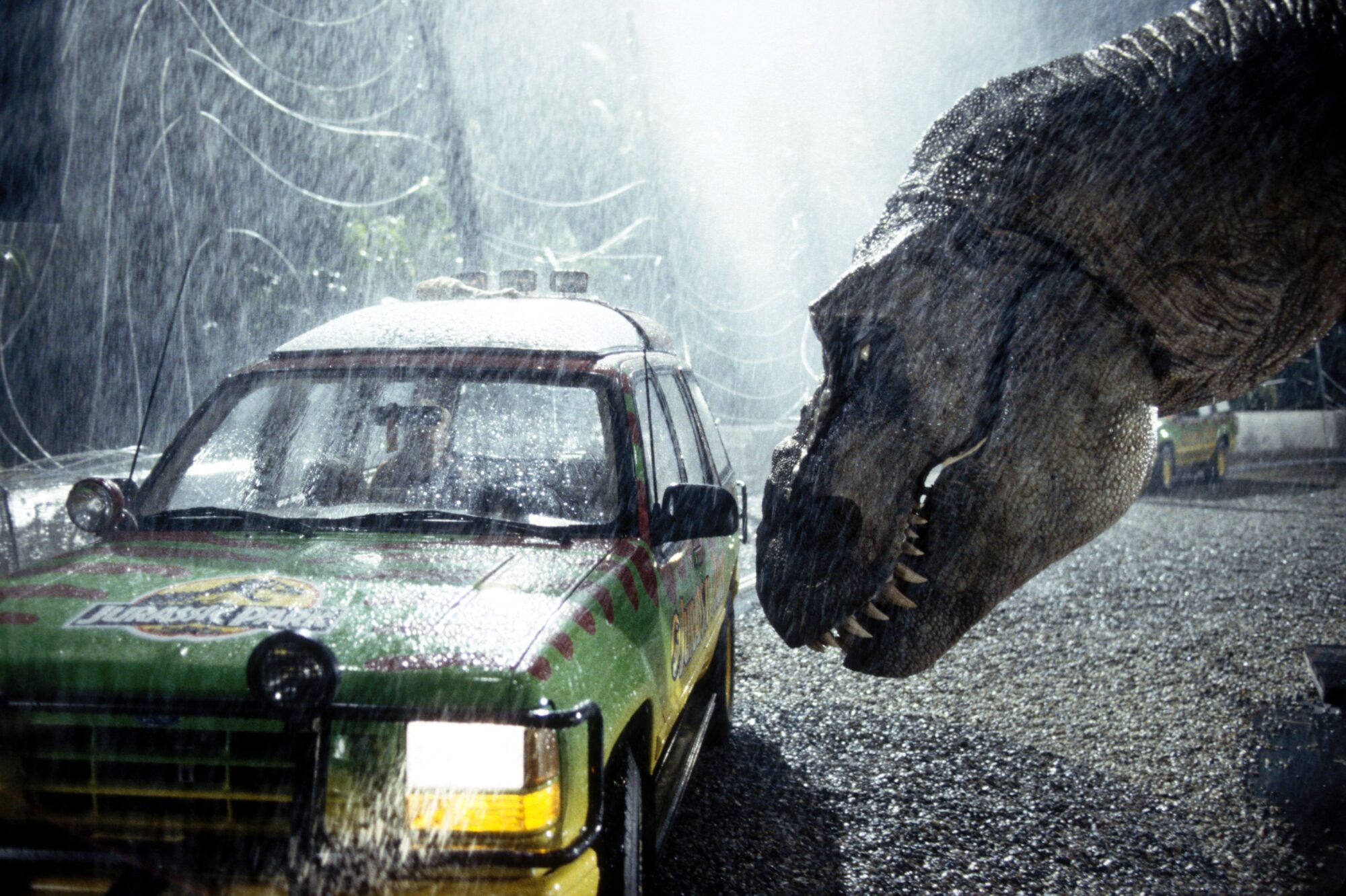 I’ll never forget the moment Jurassic Park first crashed its way into my consciousness, the film’s trailer interrupting a spirited game of basement Nok Hockey, as images of shockingly realistic dinosaurs flickered across our tiny TV screen, culminating with one gigantic, terrifying eye. This was a watershed moment. Hopelessly obsessed with extinct creatures, I’d spent years being teased by unsatisfying depictions of prehistoric life: the Marcel Delgado models in King Kong and the Ray Harryhausen ones in One Million Years B.C., the drably inked illustrations in my tattered reference books, the hard-rubber figurines that played out my own feeble scenarios. Here was something else entirely, a real movie, founded on exhilarating notions of size, suspense, and noise, my first engagement with the naked thrill of pure spectacle.

Now a 20-year-old antique slapped with a superfluous 3D transfer, Jurassic Park still has the power to amaze. Even detached from the fuzzy flow of nostalgia, its splendor remains firmly rooted in a fixed set of attributes, particularly the way director Steven Spielberg girds his high-flown fantasy within a context of concise, carefully constructed filmmaking. It’s this combination of flashy thrills and solid fundamentals that makes for what’s perhaps the most perfect distillation of the Spielberg brand, with its giddy embrace of the fringe possibilities of special effects, its blending of swashbuckling adventure with overtones of genuine terror, the fondness for small personal stories couched within impossibly large narratives.

These repeating themes, and Spielberg’s status as a director of big-budget entertainments, fixated on rote issues of identity-formation and family-building, has saddled him with the label of a spectacle-seeking sentimentalist. And while even his best films involve a certain measure of hokey schmaltz, he should be equally noted for the precise craftsmanlike qualities that turn them into uniquely rewarding experiences, his insistent focus on assembling worlds from the ground up, accounting for visceral details, no matter how ridiculously fantastical the story may be otherwise. In Jurassic Park this means building an outlandish dream kingdom on a bedrock of scientific detail, on a narrative level, and mixing still-shaky CGI effects with more large-scale models, on a visual one, qualities which help make that grandiosity tactile.

All this means that Jurassic Park feels plenty big on its own, bustling with ideas and images, defined by the director’s ability to enjoin high and low, fear and wonder, the expansive awe of childhood with the more rigorous pleasures of adult filmgoing. The 3D treatment, which aims to provide an expansion of that sense of magic, mostly ends up gilding the lily. Thankfully the conversion is handled with surprising restraint, free from cheap in-your-face jump scares, with most of the focus placed on layered depth-of-field expansion. This effect is distracting in static scenes, granting diorama-style artificiality by widening the gaps between background and foreground, resulting in scenes that actually look flatter than they did in the first place. But in the captivating action sequences, these effects get subsumed into the montage; it’s still an unnecessary expansion, but also a moderately beneficial one, expanding the bag of tricks used to distract us from the artificiality of what we’re seeing.

The biggest lure of the re-release is watching the whole thing play out on the big screen, which is still the only place a film of this size can be adequately displayed. This highlights the way Spielberg instills a feeling of relative realism through a combination of creative shooting and top-notch sound design. These two elements converge in the movie’s best scene, a long, staggered set piece involving the newly liberated T-Rex, which functions as both a pure visual exposition and a masterful exercise in entrancing montage. Skipping between a series of locations, building tension with a slow, steady pace and a clockwork system of measured cuts, Spielberg seamlessly integrates the visual fireworks with quietly impressive technique, a reminder of how heavily a lesser director might lean on special effects. The result is that a monster which might look ridiculous becomes viscerally real, and this scene, a microcosm of the film as a whole, sells the illusion by embedding it within a coherent flow of concrete images.

It’s fitting that Spielberg makes a show of equating himself with genetic mogul and self-proclaimed fabulist John Hammond (Richard Attenborough), whose humble flea-circus beginnings lead him to an obsession with presenting a truly astounding visual experience, even in defiance of the stern dictates of nature. There’s a touch of Prospero to this character, and the mysterious island, the unnatural monsters and the storm draws further comparisons to The Tempest, Shakespeare’s culminating treatise on the enchantment of illusion. The connection makes sense; working in a fantastic hall of mirrors, Spielberg once again removes the barrier between fantasy and reality, grounding big-movie magic with an insistent focus on craft.