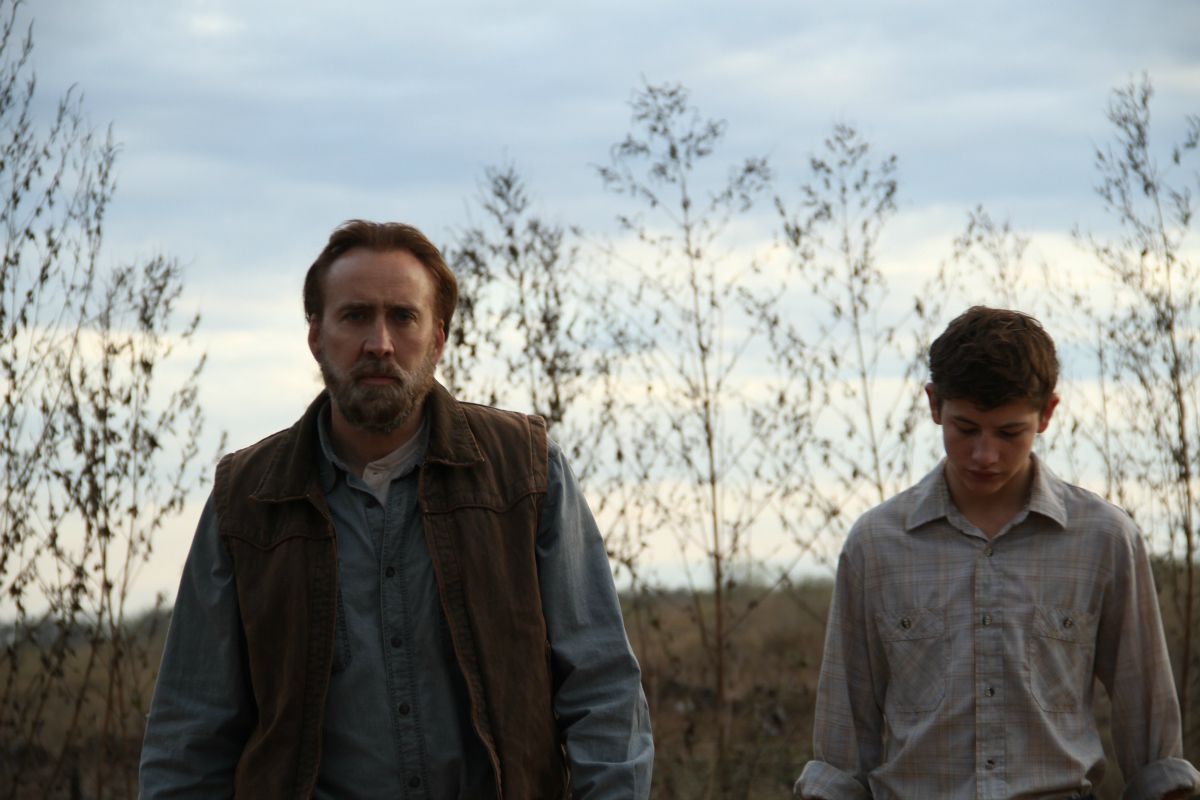 Two dirty Southern-gothic films, both telling a heavily allegorical story of one boy’s coming of age via another man’s redemption, and using said man’s monosyllabic name as an evocative title, Joe and last year’s Mud are such uncanny doppelgangers that it’s difficult to believe their directors didn’t devise them as a pair. With its fairy-tale imagery and choreographed conclusion, Mud is the friendlier of the two, though it’s also more limited, full of plot contrivances and extraneous characters, making Joe look smarter and scarier by comparison. David Gordon Green finds a balance between symbolism and realism in his storytelling that allows Joe to be many things at once: a detailed character study, a Christ-haunted morality play, a journey of becoming, an elegy. Unlike Mud, it resists easy interpretation, even though both films employ a similar narrative and thematic building blocks and feature the same prodigious young actor.

Joe (Nicolas Cage) is a Townes Van Zandt song come to life. Hard-working, hard-drinking, brusque, and hot-tempered, he spends his days poisoning trees for a lumber company and his nights chugging Coke and whiskey. Vague mentions of a destructive past posit him as an archetype of regret and redemption, and he unwittingly finds an agent for salvation in Gary (Tye Sheridan), a young drifter boy who comes to Joe eagerly seeking work.

The tenuous but paternal bond Joe develops with Gary is the film’s main narrative thrust, and also at times its biggest detriment: Joe and Gary are more complex and tangible characters when alone or interacting with other people; in scenes featuring just the two of them, Joe’s symbolism can become heavy-handed. Joe and Gary are, to borrow a binary system from The Tree of Life, the embodiment of nature (Joe) and grace (Gary), and when they function as a unit—or rather, complementary inverses—they resemble ideals rather than actual people. In Joe’s third act, by far its plot-heaviest, Green’s balance of symbolism and realism threatens to tip too far in favor of the former, but the filmmaker’s skill in establishing mood, and his actors’ proficiency, generally prevent the film from treading into overwrought territory.

Cage and Sheridan work hard to ground Joe and Gary in the everyday of their rural Texas environment, never overplaying scenes or allowing their characters to trust each other too much. Cage delivers his strongest performance in some time, relaying the insecurity and indecision behind Joe’s tough exterior while still remaining an imposing, often frightening presence. Gary as written is a bit too pure and perfect, but Sheridan emphasizes his boyishness and trepidation, finding rough edges in a character that could have easily descended into martyrdom.

Most of Joe’s other characters are merely peripheral, with the exception of Gary’s alcoholic father, Wade (Gary Poulter). A villain right out of Shakespeare, Wade is, much like Gary, characterized too bluntly: His tyrannical hold on his son includes violent beatings, stealing his money, belittling his entire family, and drinking himself regularly into a stupor. As played by Poulter, however, he’s as pitiful as he is monstrous. Joe’s most terrifying sequence follows Wade as he stalks and then brutally kills a homeless man for alcohol in broad daylight; in contrast, a scene in which Gary tends to an drunkenly incapacitated Wade is absorbing in its strange tenderness.

Early sequences following Joe and his employees combing through patches of forest establish Joe’s darkly impressionistic tone: Shot and edited almost in a montage fashion, and set to a moody score by Jeff McIlwain, this dreamlike introduction brims with equal parts dread and wonder. It’s a surprising filmmaking strategy for a story about such earthbound people, but Green has a gift for balancing the abstract with the mundane. He isn’t afraid of visual flourishes: a bulldog’s mouth dripping with another dog’s blood; a hog, hanged vertically, being stripped of meat; the kitchen of a brothel, its windows boarded up, with everything aglow in red. These are striking images, but not indulgent ones—bloody portents of things to come, but also products of their environment. Similarly, Joe is both an atmospheric allegory and a muted character drama, shapeshifting and showing new sides of itself up until its very end.