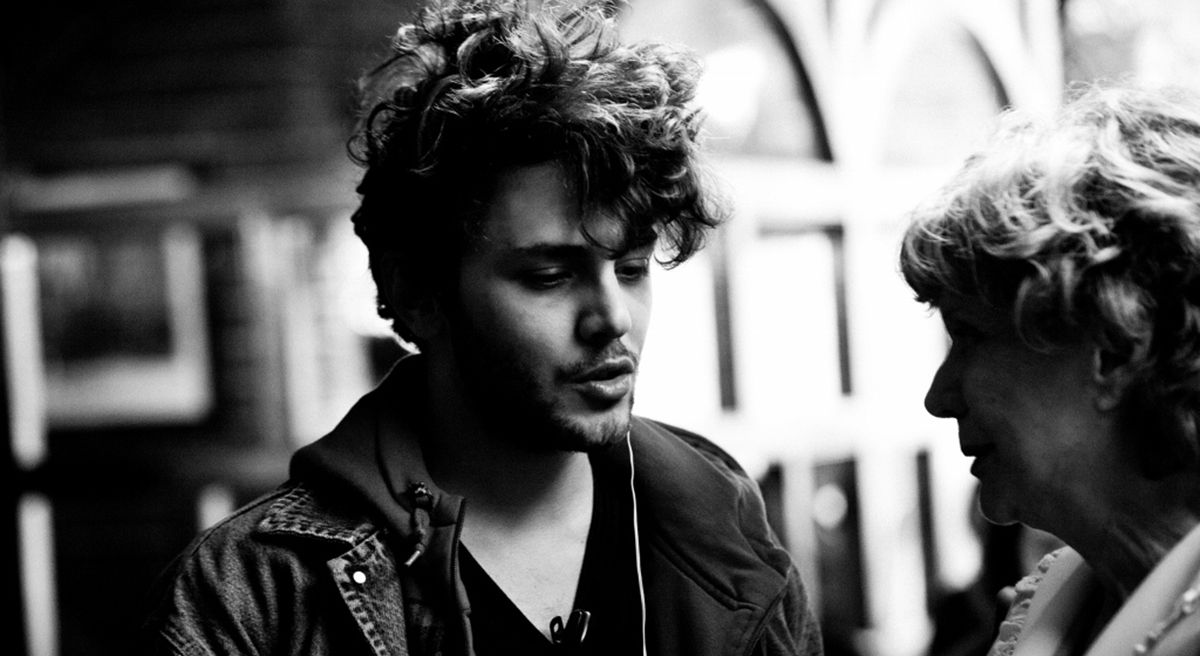 Xavier Dolan has firmly established himself as a rising talent of note with the critically acclaimed I Killed My Mother and Heartbeats. His new film, Laurence Anyways, is a story of the impossible love between two adult idealists. After a two-year relationship, Laurence (a mesmerizing Melvil Poupaud) tells his girlfriend, Fran (an energetically bombastic Suzanne Clément), that he wants to become a woman. Despite initial shock, she decides to embark on this life-changing journey with him. The film is in competition for the Prize Un Certain Regard at this year’s Cannes Film Festival. We spoke with the young and talented filmmaker about Laurence Anyways, his fascination with Titanic, his use of music, and more.

Laurence Anyways is your third film, but the first in which you don’t appear.

Well, there was simply no role for me [in it]. Although I feel like I’ve acted in this movie so much, being behind the camera and giving the actors notes, talking during the scenes. It truly feels as if I’ve acted with them. I could have been Laurence with great pleasure. I wrote the movie initially thinking of myself. But then casting Suzanne wouldn’t be an option because the age gap would’ve been a bit exaggerated, maybe even excessive. It was an opportunity for me to really focus on directing.

But you’re not done with acting?

Oh my God, no! I’m acting in my next film. I constantly mention in my interviews how important it is for me to act. And the reason I’m here in Cannes for so long is to meet with other directors and tell them how I’m longing to act for someone else, be directed. I am convinced I could become a really good actor, if only I keep on doing it.

How quick does an idea for a film develop in your mind?

As a matter of fact, in this case it took about 35 seconds. When she [the real person who inspired Laurence’s character] started telling her story, and then went on telling it, I was already processing it, typing the script in my thoughts. I got home and wrote about 30 pages, of which almost nothing is left, apart from the beginning and the ending. I started and then realized I am going to spend at least a year writing this.

Laurence Anyways takes place in the ‘80s and ‘90s. Is there anything you’re drawn to from these periods?

I was born in 1989 and grew up in the ‘90s, but I’m not particularly interested in them. They were simply interesting for the film. It’s not my biggest wish to make people wear horrible clothes with huge shoulder pads. It just seemed like a nice political and social context for the story. Things were evolving then, people still had this illusion of social progress, due to events like the collapse of the Berlin Wall. Also, the subject of AIDS and all the assumptions it caused, like enforcing prejudices against homosexuals. For Laurence, contextually, it was a time when he felt he could belong. But I’m definitely not obsessed with the ‘90s; it’s just the time of my childhood and my memories.

You made some very interesting music choices in the film, mixing Duran Duran with Brahms and Depeche Mode with Celine Dion.

I’m a big fan of music in general, good music. It was my great pleasure to [bring that to the character of] Laurence: music and discoveries that made me happy at a certain point in my life. Some people claim there’s too much of it in my films. I might feel like there’s too much of it in the end. But to me, that’s what cinema is about. We have entered a decade where people are obsessed with minimalist acting. But as far as minimalism goes, you just can’t act like Bill Murray in Broken Flowers all the time, because there’s no more fun left. If it feels like my characters are over the top, too flamboyant…I don’t even think about these things. I’m just excited to make a movie! And it’s the same with music. I’m listening to a song and immediately start thinking, “This is perfect for the project.” I write scenes around certain songs. Music was the only voice of cinema for a very long time before we had sound; it’s organically linked to cinema itself. So I see no reason to restrain myself, thinking how much music to put in the film. I don’t want to ask myself this question. I understand that people might think there’s too much music in the film, but not for me. To me music is the soul of the film.

How does it translate into on-screen emotions?

I love power and ambition as much as I love romance and despair. All those things are in my films. For example, “Fade to Gray” by Visage [used in the opening sequence] is so glorious and sexual that it’s perfect for someone to make an entrance. The scene I used it for is a total fantasy, it’s not real; she [Laurence] doesn’t, in fact, come in a blow of wind, it’s vue de l’esprit, her imagination. This musical theme has always been associated with Laurence.

I remember reading an interview with you, where, naming your inspirations for I Killed My Mother, you mentioned Thomas Mann’s Death in Venice and Alfred Hitchcock, just to name a few. What were the most important influences for Laurence Anyways?

Mostly paintings, photo albums. The Silence of the Lambs inspired the close-ups that I love: very little depth of field, sensation of surveillance, direct looks in the camera. But I wouldn’t call this inspiration, it’s something that tints your whole work. In this movie, I talk about how society looks at people, so it felt interesting to have characters look exactly into the objective, in the eyes of the viewer. Also, the movie opens with a series of looks, Laurence walking down the street, vanishing in the mist and then blowing it out of his nose, 10 years earlier.

I think there’s one more important point of reference, that you’ve still not mentioned…

Listen, I am very romantic. I wanted to do a sort of Titanic. There you have it!

If she is, all she’s got to do is call me [laughs]. Titanic is one of the most ambitious love stories I’ve ever seen. When you watch it as a child you have to be inspired. Someone in absolute control of his craft, budget, and all the tools at his disposal tells you, “Dream on, everything is possible.” This movie gave me wings. It told me that cinema was about an epic journey. They say cinema is supposed to represent life. But then there’s life for living, and cinema for escaping; it’s allowed to be too much sometimes. Titanic guided me through the ambitious path of Laurence, although it’s a completely different type of movie—and a completely different budget as well.

But the same length!

So untrue! Titanic is precisely three hours and 18 minutes.

It’s also a period film, and so is Laurence Anyways. It’s a novelty in your work.

It’s a fact and at the same time an insult for my cast: “A period film for him is something that takes place in the ‘90s,” they must think, “little fucker!” We really enjoyed creating it, but apparently the ‘90s are very expensive to recreate, because it’s a decade that everybody tries to forget. Clothes, cars, everything was ugly, so where are you supposed to find it? It’s not vintage, not yet. It demanded lots of research. Extras, cars, and locations are a challenge when you’re doing a period piece. You have to dress people right, get proper registration plates, find places with architecture that fits the requirements…

Titanic is also a film about impossible love. So are your creations.

Yes, all my films were about it, and the next one is going to be about impossible love as well. I Killed My Mother was about this feeling between a mother and her son; Heartbeats was the impossible love story of a triangle, or rather two best friends and a beautiful stranger. Laurence Anyways is about the impossible relationship of two idealists in their adult years. And now I’m logically planning to talk about baby boomers. My next film is about an impossible love between a baby boomer and cinema.

You’re very often referred to as wunderkind. Does it bother you or do you accept it?

Everyone is free to use whatever terms they want. It’s a part of my job to learn to deal with reviews. Wunderkind isn’t derogatory, unless you’re 40 and described as “once a wunderkind.” I want to act as well, so I don’t know how long I will keep on doing movies…well, okay, probably it’s gonna be all my life.