From the very beginning, Austrian filmmaker Ulrich Seidl’s work has courted controversy, first among his professors, who expelled him from the acclaimed Vienna Film Academy, fearing that his bold work might put the school’s reputation at risk, and later among film critics and general audiences. The films in his Paradise trilogy, recently picked up for U.S. distribution by Strand Releasing, were inspired by a 1932 play by Ödön von Horváth’s 1932, Faith, Hope and Charity, and they follow three women from one family through interconnected stories. The first, Paradise: Love, about European sex tourism in Kenya, was part of the main competition at this year’s Cannes. The second, Paradise: Faith, is the story of a Catholic woman on a contemporary religious crusade, starring an exceptional Maria Hofstätter. Seemingly inappropriate and blasphemous religious symbolism is dominant throughout, often in sexual contexts, but Seidl’s compassion toward belief systems is unmistakable. This is a story of a devout believer, her desperate attachment to symbols and her search for their true meaning, as much as it is a piercingly detailed portrait of middle-aged loneliness. The film is also the freshly anointed winner of a special jury prize at the 69th Venice International Film Festival Jury, where our conversation took place.

How would you describe your feelings about religion?

It’s very complicated, and difficult to reduce to one single phrase. I can definitely say it’s something that doesn’t leave me untouched. Faith and religion, on one hand they can be easily perverted, lead to militantism, extremism, but at the same time it’s something humans search for and need. God always keeps coming back to me and so do feelings of bad conscience.

Was Paradise planned as a trilogy from the very beginning?

A film is a journey I embark on. It might take many years. It starts with a script that’s very precise, but doesn’t have any dialogue in it. Then we start shooting and my original intentions are constantly interrupted by the location, cast, by the research results. Location is especially crucial, as it gives the film its atmosphere. Before I start every film I spend a lot of time scouting locations, until I finally find what I need. I’m not someone who knows exactly, what he’s looking for; on the contrary, I only know what I don’t want—unlike Michael Haneke, who always knows exactly what he’s aiming at. In the process of shooting it might turn out that the story is setting off in a completely different direction. I’m always shooting chronologically, so I’m able to see how the story develops, what works and what doesn’t what needs to be changed. It may go one way or another. Certainly at the beginning I did not intend Paradise to be a trilogy.

Yet this is what it turned into. Faith is the second part of it, Hope will be the last. How are you working on making this cycle coherent?

Each film has its own themes, laws. It depends on the combination, connection between actors, locations, stories. It all comes together with different results, and depends on your cast as well. In the case of Faith, I think the story is very different than in Love. Also, the reaction from spectators varies. During Faith, for example, they tend to laugh more. Maybe it’s because faith is much easier to ridicule than love.

Did you plan the film to have a comedic tone?

It seems like no matter what you put into a film, people always manage to find something scandalous about it it. Why do you think this happens?

I assume it comes from the fact that I don’t shy away from showing things that are taboo, thing we do not want to see. But it’s never out of context, never apart from the character. Otherwise it would be a poor shock strategy: showing things for shock’s sake. It would be silly and that’s not what I am looking for. In Paradise: Faith, Anna Maria’s love for Jesus is constantly growing, becoming more intense. To me, it felt natural that at a certain point it becomes sexual as well.

Critics often describe your work as controversial, because they see it the same way Anna Maria perceives faith: reduce it only to the very visual layer of representation, without really trying to understand what it stands for.

The media’s always very eager to identify a potential scandal and make a huge story out of that; they do it consciously. It’s not at all the way I see things. I trust my gaze, I trust my judgment, but I can’t predict whether something will or will not be found scandalous by the audience. What I’m trying to do is simply use images so that I can tell the story I have in mind. My idea of filmmaking doesn’t take the audience reaction into consideration. I never think about it beforehand. I have to trust myself and assume that what I find important and correct will also be of the audience’s interest.

This project seems particularly difficult to prepare. Especially considering that many scenes in your films, however precisely planned, are being constructed while shooting.

It’s a well known fact that I spend a very long time preparing for shooting. Whether it’s the case of beach boys from Paradise: Love who I spent plenty of time with, or being among devout Catholics in Paradise: Faith. I followed them for weeks, on their door-to-door journey with the wandering virgin figure, asking what faith means to them, how did they come to the understanding of faith they have. It’s a crucial part of the process, as my ideas derive from my encounters with reality. Preparing for the part was very difficult for Maria, as she’s had a very strict Catholic upbringing herself and has already struggled, grappling with it for a long time. A part of my job was to help her with the research and also with coming to terms with this situation. I actually suggested she’d take the vow of silence for a while, hoping this could potentially help her with the process, become closer to her character.

You have been working with more less the same crew for a very long time. Does the sense of closeness and trust you’ve developed over the years help you?

To me, working with people whom I’ve known for years and have experienced a lot together with is very important. We share our past so we can work a lot better in the present, as we know what each and every one of us is looking for. We know what’s important, and we share a sense of intimacy and trust. The choice of crew members, except maybe for directors of photography, is also very important for the on-set atmosphere, because it can influence the actors. Especially that we are very often working with non-actors, there needs to be a humane relationship; these people need to feel comfortable and a proper crew can help with that. We are asking non-professionals to improvise, invest themselves emotionally, give themselves in to the part. They need a sense of liberty, support. If it was just a cold, technical support they would never be able to do that.

Are your films about Austria, or rather about the world?

Definitely about the world.

Rimini Review: Ulrich Seidl’s Tragicomic Braiding of the Soul of a Man and Nation 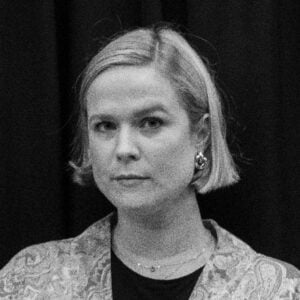 Anna Tatarska is a film and cultural journalist with a career spanning almost a decade. She lives in Warsaw, Poland.