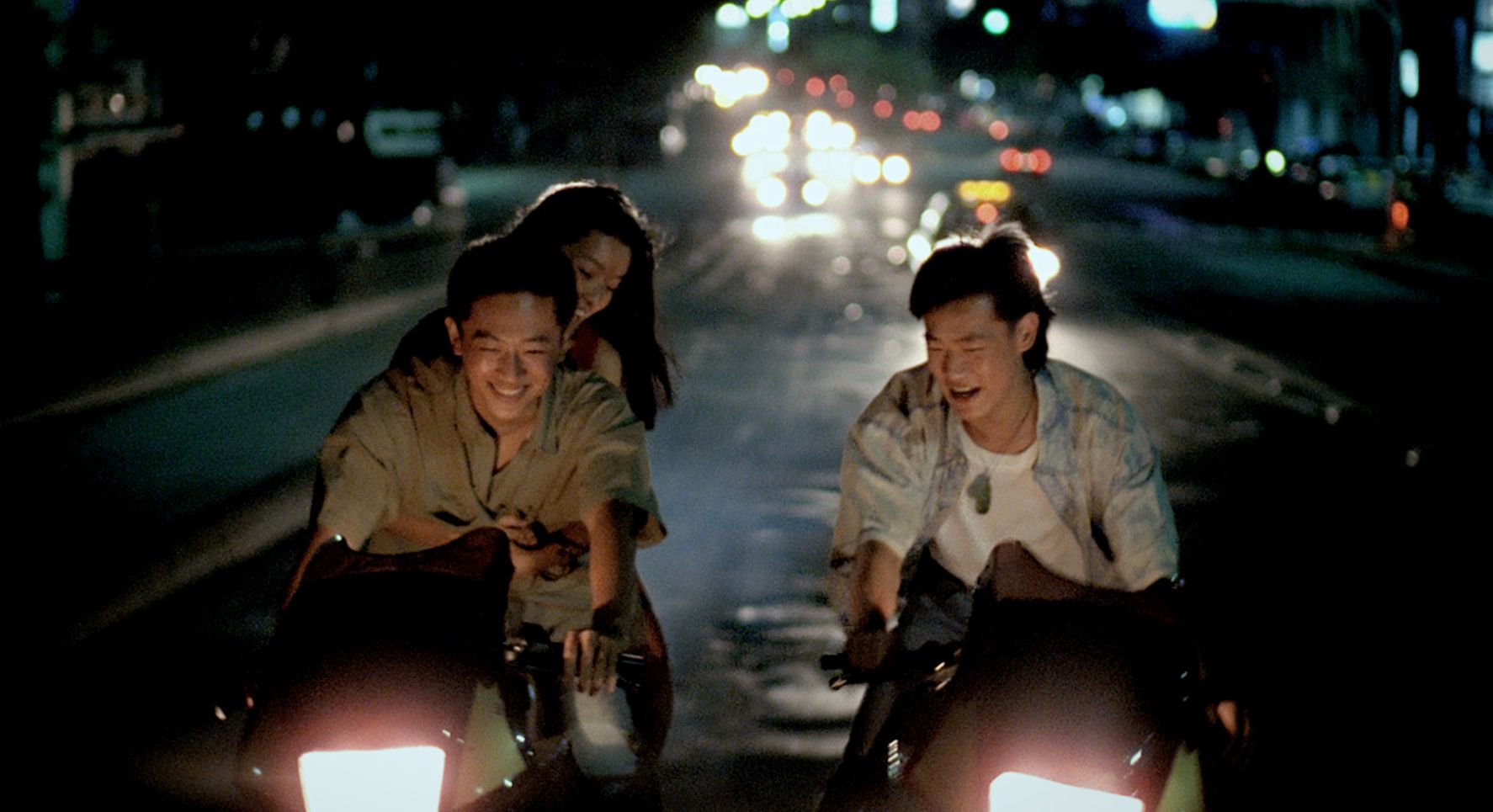 If Tsai Ming-liang retires from filmmaking, as he stated to be his intent at the 2013 Venice Film Festival, then he leaves behind one of the most compelling filmographies of contemporary cinema, beginning in 1992 with Rebels of the Neon God, which is soon to receive its inaugural theatrical release in the United States. There are marked differences between Tsai’s first feature and the rest of his films, including the inclusion of a score by composer Huang Shu-jun. Nevertheless, the film’s vision of Taipei as a brightly lit playground for troubled teens, replete with seemingly innocuous arcades and skating rinks, supports Tsai’s continued interest in time and space as slipstreams for pop-cultural engagement and familial reckoning. His films, though inevitably marked by the locales and specific circumstances of when they were shot, attain a timeless quality through their refusal of outright resolution, often leaving characters, seemingly, as their plights have just begun. As such, it would be a great, and fitting, irony for Tsai’s first film to be released as his last. Tsai spoke with us via email about how he came to make Rebels of the Neon God, the origins of his working relationship with Lee Kang-sheng, and his participation in the film’s recent HD restoration.

Rebels of the Neon God was produced by the Central Motion Picture Corporation, where you made your first three features. How did you come to write and direct Rebels there and how were your features shaped by the CMPC over those several years?

The CMPC is the head of the dragon that is Taiwanese film production. Although film production plummeted in the 1990s, the CMPC remained the most prolific national institution for film production. In light of the receding film production, they wanted to make finding and cultivating new filmmaking talent a primary mandate. Back then, Mr. Xu Li-gong, the head of production there, saw that something I made for television had won an award, and enthusiastically invited me to make a feature film. So, in 1992 I made Rebels of the Neon God, and it was selected to show in competition at the Berlinale, and won an award at the Tokyo Film Festival. Nineteen ninety-four’s Vive L’Amour won the Golden Lion at Venice and helped me break into the European arthouse scene. The River in 1996 won an award at the Berlinale, and sold very well to the Japanese.

Following your work with the CMPC and with the exception of Goodbye, Dragon Inn, all of your films have been financed through French institutions, most recently JBA Production in conjunction with your own company, Homegreen Films. What effect, if any, has the shift in funding had on your work?

The success of these first few films began to attract European financiers to my productions, especially Arte in France. From The Hole onward, my films have been French co-productions, which gave me the chance to start my own production company. From What Time Is It There onward, I began to control every aspect of my work, from production to distribution. This has given me utmost freedom.

Lee Kang-sheng stars in all of your feature films, in a manner that recalls Chishû Ryû in Ozu or Jean-Pierre Leaud in Truffaut. Additionally, Leaud appears in What Time Is It There? and Visage. Could you explain your working relationship with Lee and whether or not directors like Ozu or Truffaut have had a lasting influence on your casting decisions?

Anyone who makes films as an artistic endeavor would avoid calling their work a product. An auteur has his singular vision, and pays no attention to outside influences with regards to his themes or subjects. When I found Lee Kang-sheng on the street, I invited him to be in my films. Since then, his perfect embodiment of an anti-actor has had a profound impact on my work. One day, to my shock, I realized I never wanted to move my camera away from his face, and it was then that I found the true reason for making films.

You have said that you aren’t a filmmaker who tells stories, but a filmmaker who creates images. Stray Dogs appears to support this claim, and curator Michael J. Anderson says the film “stands somewhere between gallery practice and conventional narrative cinema.” How do you see your films in relation to video art or the gallery space?

If aesthetic beauty can be removed from a film, would it still be a film? However, the majority of filmgoing audiences aren’t going to discuss aesthetics with each other. What does one see when going to a Hollywood film, or watching one of the hundreds of films available to stream on a long flight? I never thought of going against any sort of mainstream: I am a filmmaker and I make films that are temporal-based, but they aren’t made with a circumscribed audience in mind. It’s fortunate that the contemporary gallery world has found an enthusiasm for this work, especially in Taiwan. Because of this, Stray Dogs has found another way of being shown, in the new context of a gallery installation.

Your films have garnered a reputation for a particular formal style, often utilizing a static camera, long takes, unscripted dialogue, and minimal music. However, there’s a notable use of Huang Shu-jun’s score throughout Rebels of the Neon God that is seemingly unique to your filmography. How has your philosophy on using music changed since Rebels?

Before making films, I made several television segments that dealt with social issues in Taiwan. To make the footage appear more “realistic,” I eschewed the established techniques of theatricality—decoupage, scenario, and acting—because I wanted there to be more liveliness in the scenes. Non-diegetic music seemed to me like a detrimental distraction, and I began tempering my use of it. When making Rebels of the Neon God, I simply didn’t want any soundtrack music. It was my producer, Mr. Xu [of CMPC], who urged and even threatened me to change my mind. In the end, Huang Shu-jun helped me to compose the music. I told him to just make something very short. It turns out that little bar of music was well-awarded in Taiwan, so during the making of Vive L’Amour, Mr. Xu insisted on music again. So I found another well-known composer in Taiwan to make the ending theme. But when the film was finished, I realized there could absolutely not be any soundtrack music whatsoever, so it was all for naught, and I had pissed off some people.

The aforementioned formal characteristics have been termed components of “slow cinema,” which your work is often described as. In fact, a book entitled Tsai Ming-Liang and a Cinema of Slowness was published in 2014 by University of Hawaii Press. Do you accept this label for your films?

My films have been labeled “slow, boring, queer, colorless, anticlimactic, opaque…” Is it praise? Slander? What can I say? My films are my films. Rebels of the Neon God is now over 20 years old, and I’m ecstatic that it continues to find a new audience.

Rebels of the Neon God opens for the first time in United States theaters this April, in a new HD restoration. Did you oversee the restoration and, if so, what was intimately revisiting the film like for you?

Three or four years ago, CMPC did their first digital film restorations. Included in that were Hou Hsiao-hsien’s Dust in the Wind, Edward Yang’s The Terrorizers, and Vive L’Amour. At the time of completion, director Hou went on record to say that he was not happy with the look of the restorations. I was trying to be polite, so I didn’t say anything. I was simply baffled as to why they didn’t invite the filmmaker to supervise these restorations, and instead let the lab technicians make all the decisions. So this time, I assertively participated in the HD restoration of Rebels of the Neon God, and found the people involved to be very agreeable. The most important thing is for the new technology to find the magic of seeing a pristine 35mm film again.