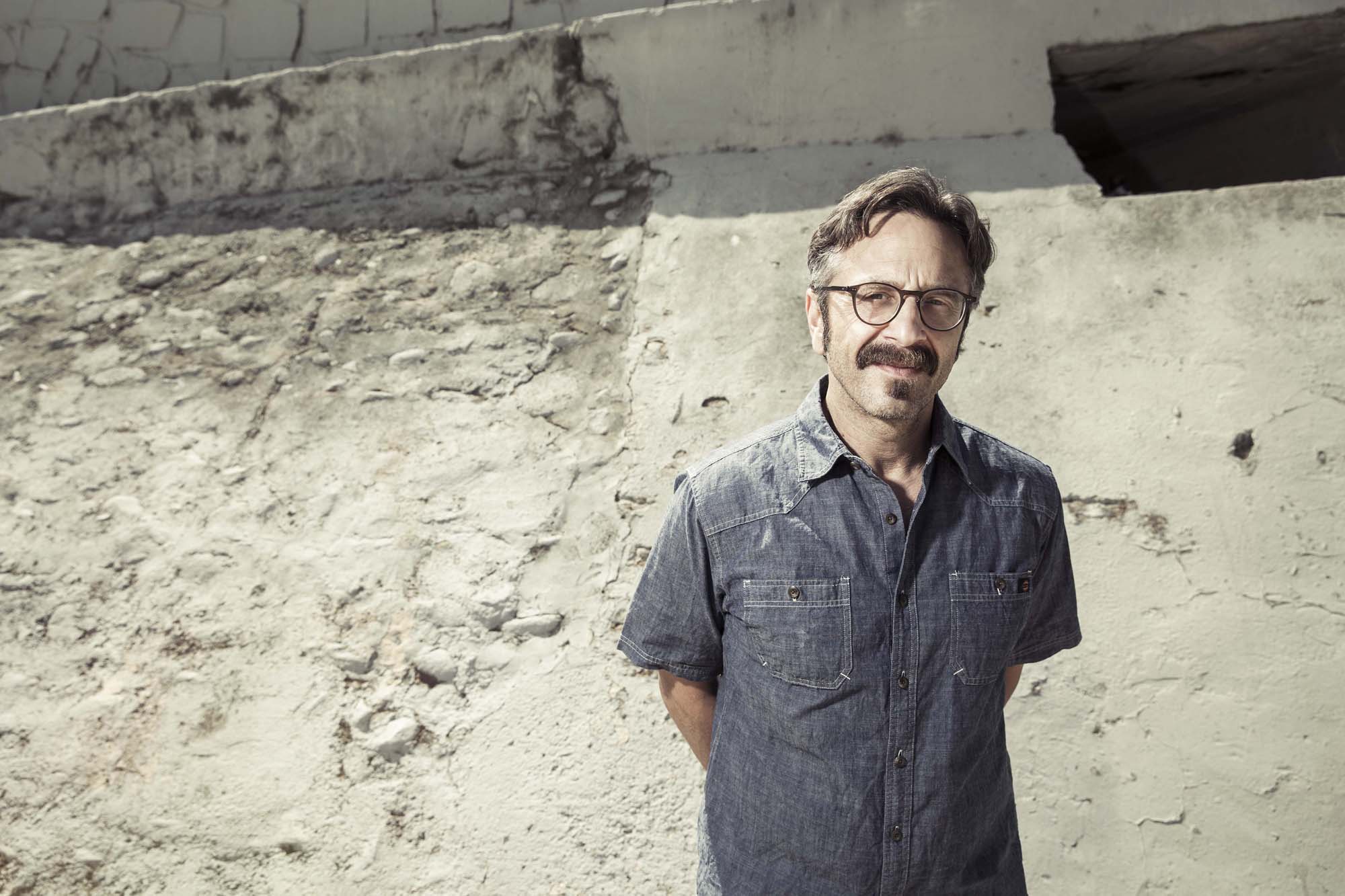 Marc Maron is presently enjoying one of the most unlikely and inspiring success stories in Hollywood. Once known as a bitter “comic’s comic” who was eclipsed in success by contemporaries such as Louis C.K. and Jon Stewart, Maron has been reborn into a poster boy for empathy, starting with his blockbuster podcast, “WTF,” and continuing with roles in the hit television series Maron, Easy, and GLOW. With each role, Maron has rapidly evolved from a “comic who acts” into a first-rate character actor capable of subtly altering his charisma to fit a variety of oddballs who, like himself, struggle with self-doubt while attempting to walk a straight and sober path.

Now, with Sword of Truth, Maron makes his debut as a cinematic lead, playing Mel, a pawnshop owner who ends up on a road trip that stirs long-festering feelings of estrangement, which parallels the forms of isolation gripping a variety of other characters, and which the film’s director, Lynn Shelton, links to the reactionary myths and politics currently gripping this country. The role marks another career high point for Maron, who talked to me last week about the communicative bridge linking his acting with his podcast, how he likes to be directed, and the “mind-fuckery” currently gripping modern media discourse.

Given that you’ve previously worked with Lynn Shelton on Maron and GLOW, did you two have a kind of collaborative shorthand going into Sword of Trust?

Well, I’m generally filled with anxiety and resistance. I don’t know if there’s a shorthand, but Lynn knows how to get the best out of me and works with me pretty well. I like directors who’re hands on with me and guide me.

Do you like to receive a lot of explicit direction, or is your process more intuitive?

Well, I do what I do. I definitely welcome suggestions, because I’m certainly not going to think of all the possibilities of a scene. Most of my choices are not necessarily correct. I usually come in pretty intense and hot, and there’s subtleties that can be coaxed out with minor tweaks. And I like working like that. I wouldn’t have the confidence to assume that my take is the “right” one necessarily.

There’s a stillness to you in Sword of Trust that I’m not sure we’ve seen before.

Your weight as a performer is really felt here, especially in that scene when Mel first see Lynn’s character in his shop. I love how you enter the room from the closet, and how one can feel the emotion bubbling up in Mel.

Thanks, man. I think this is a heavy-hearted guy who’s sort of surrendered to his lot in life. He also has a certain amount invested in his own. I don’t know if it’s heartache, but he’s definitely a broken dude who’s making the best of whatever time he has left. I don’t know if the other characters are really like that. They are always in forward motion.

You also inform Mel’s appraising of objects with all these lovely emotional textures. He’s not only talking about a sword.

The guitar too. As I act more, I try to take some of the space that you’re talking about. With acting I feel that I’ve been learning on the job in a way, and over time I’ve started to explore different possibilities with owning whatever my space is, whether it’s a movie or on stage. Certainly, over decades of doing stand-up, I’ve figured out my space on a stage, but being on a set and pacing yourself and taking the time to engage with what’s around you I think makes a lot of difference in how a performance comes off. It’s about being present in an environment.

Has your ascending acting career changed how you relate to actors on your podcast?

Over the last few years, since I’ve started acting more, I’ve had more actors on. I tend to try to pull a nice acting class out of that. I think a lot of what my guests say makes sense. Once again, a lot of acting is about listening and being present. In another time in my life, I saw certain actors as mythic. Now that I’ve talked to so many of them, I’ve started to realize, not in a disappointing way, that…what’s the word I want? That these are people doing a job, all in their own way. Once you get on set with people, you realize, “Well, that’s how they’re approaching this job,” and when you get into the ring or the scene, you’re in it.

That inside knowledge gives “WTF” an edge too. For many interviewers, like myself, art-making is basically theory. But you have your feet on the ground so to speak.

I think that happens over time. I don’t think I ever set out to interview. I’ve framed what happens on my podcast as conversations, and they either go somewhere or they don’t. There’s a few points I may get hung up on, and there are places I go to fairly regularly in interviews, but I generally don’t see these conversations as question-and-answer situations. I don’t have any expectations really other than to feel a connection or to sort of be enlightened. I think those of you who have a job to interview, for an outlet, for the content and the word count and everything else, might have more restrictions. I don’t have to answer to anybody and I don’t know what I’m looking for half the time.

Yeah, and a challenge I’ve found with interviews is that one doesn’t always entirely know what is and isn’t in bounds, which can lead to an impersonal vibe. By contrast, your podcast has such an intimate layer throughout.

You have to feel that stuff out, you know I’m not necessarily intuitive about that. I’m not really in the business of sandbagging anybody.

Usually you get somebody comfortable and things come out. If people are comfortable and engaged it doesn’t really matter what they’re talking about. Audiences will say, “Oh, wow, I didn’t know that.” These conversations don’t require information, but an emotional connection. I’m so happy about that, especially considering the never-ending torrent of garbage that we have to move through every day.

I think about politics. Politics online are rarely civil, but when you get someone in person, and start slowly, and are willing to have a conversation, you can normally get farther than you might expect.

Online culture isn’t civil and there’s a momentum to everything that’s based on mind-fuckery. I know for myself—as somebody who was relatively disinterested and uninformed about the functions of government and why politics and leadership make a difference—that people are perfectly willing to volunteer their brains to these strange flashpoint reactors that trigger them emotionally. People live by these black-and-white decisions. It’s not good. We need to consider what we really know and how we know it and what we’re telling other people.

People are so empowered by garbage information that’s being related in a relatively shallow way, which doesn’t take into consideration the influence and context of the rest of our lives. It’s sort of a disaster. I try to stay away from that stuff in terms of the conversations that I’m having. I’m trying to deal with something more human and experiential. Most people are regurgitating talking points on both sides without thinking of how someone feels and how to affect change. I got an interview with Geena Davis [who stars in the new season of GLOW] coming up, about her work with her foundation and her work in this documentary about women in show business. It’s called This Changes Everything. I tell you man, when someone’s that personally invested in something they believe in, and it’s righteous, and they lay it out for you and it makes sense, that’s what heartens my belief in this possibility for change.

To change gears a bit, is it cathartic for you, as someone who’s long been in recovery, to play characters who’re either reformed or have drug issues?

Yeah, sure. Most obviously there’s the last season of Maron, where my character has a relapse, which frankly didn’t happen in real life. When you really understand the nature of addiction, and you’ve seen it from the inside, and know the powerlessness and the struggle to live a life that’s not in the throes of it—I mean, it’s such a common struggle. And what’s amazing to me is how many people don’t find a way out of that or don’t seek help. Or are ashamed of it or don’t know how to get the help. I never set out to do this, but I’m thrilled and humbled by the effect my work has on people who’re isolated by this sickness. It’s really one of the more satisfying results of the podcast: how much mail I get from people who’re struggling and who want advice, or who feel less alone from what I’ve said. The great thing about recovery, and about playing these parts, is that it gives you a context that’s very specific—a way to legitimately help people that can change their entire lives.

Review: Cassandro, the Exotico! Shoulders the Strange Burden of Empathy