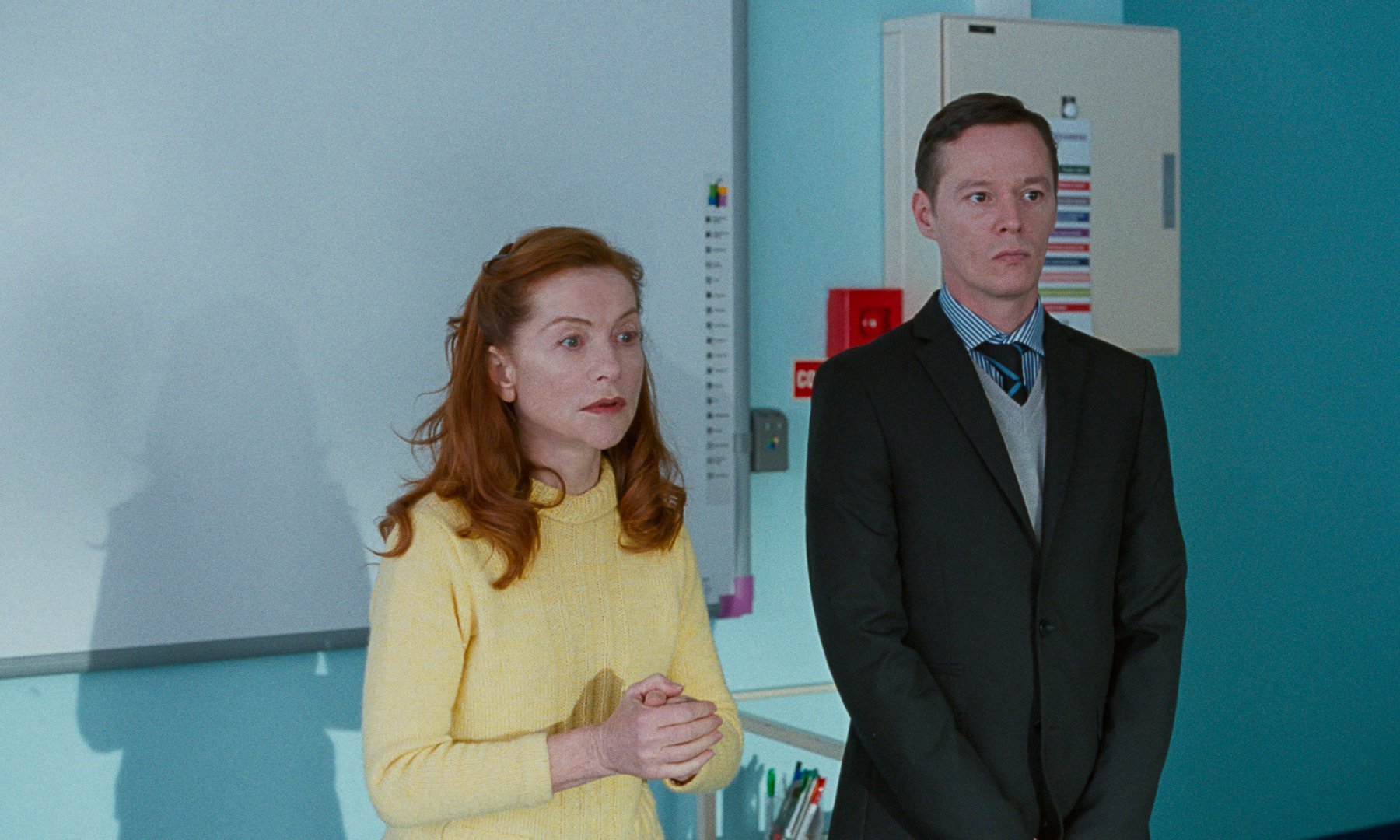 Marie Géquil, Isabelle Huppert’s character in Serge Bozon’s Mrs. Hyde, is a physics teacher who becomes a firestarter after accidentally being struck by lightning. Suddenly, this woman who can’t control her unruly students can melt ice with just a touch, and when night comes and she starts to glow, she can set people, animals, and objects ablaze. Consider, then, the film a cheeky commentary on—and diffusing of—Huppert’s image as an “ice queen.”

The actress is known for playing characters who are no-nonsense, but Marie Géquil suffers fools badly in Mrs. Hyde. Watch Huppert’s expressive face and body language—her open mouth and darting eyes, her pleading looks—as her students frustrate her. Her comic performance is captivating.

The film shows how Marie gets through to one particular student, Malik (Adda Senani), who often baits her in class. Following her accident, Marie changes, and teaches Malik physics. As she lectures him about points and a line, she demands that he think and learn. It’s another key moment in Mrs. Hyde, showing as it does Marie’s determination. Huppert makes viewers think and learn about her character’s own transformation from powerless to empowered, which is what makes Bozon’s film so compelling.

Last year, during Mrs. Hyde’s North American premiere at the New York Film Festival, the indomitable actress sat down with me to discuss the film’s vacillations in tone, being terrible at math, and how she finds her characters.

I would call Mrs. Hyde your “superhero” movie. What are your thoughts on having to play “fantastic” as well as realistic versions of Marie?

Initially, I never took her as a realistic character. The universe Serge created is so imaginary, so wild and crazy. You don’t meet a woman like that in the street. The way she’s dressed, she could be a teacher in the 19th century. But having said that, she’s a human being, and even if she’s unrealistic, she has emotions. I was not concerned with it, in a way. The Mrs. Hyde part of the character was not my responsibility. It was Serge who was in charge of this because the changes were technical. Even as Madame Géquil, you don’t see her thinking about Mrs. Hyde. It’s completely separate. It’s like she had a dream. It doesn’t reflect on her everyday life.

Throughout its running time, Mrs. Hyde shifts back and forth between satire, allegory, and realism. Did you find that you had to calibrate your performance to conform to Serge Bozon’s approach to the material?

Some scenes are comic, and some scenes are more emotional. Almost constantly, my character is both. She’s naïve and completely different from the world in which she lives, but she has this consciousness. She has a mission as a teacher. She believes in education and she has her own set of values. But the tone of the film and the narrative always takes you in both a comic and tragic direction. At the beginning, you can laugh at her, or laugh with her—mostly at her—and sympathize with her.

This is the second film, after Mia Hansen-Løve’s Things to Come, in two years in which you’ve played a teacher.

I often play teachers. The Piano Teacher! I don’t know why. I never thought about it until someone pointed it out to me. Each of them is so different.

Was there a teacher who inspired you as a student? Not someone who influenced your performance, but one who sparked your love of learning.

It’s a common saying that transmission goes through a relationship. All of a sudden, you can meet a teacher who makes you like a subject. But no one ever really made me like math. I’m a disaster in math. But that’s not any teacher’s fault. As much as you can be born with green eyes and red hair or blue eyes and black hair, you can be born good at math. There’s a math teacher in Paris who’s a writer, Stella Baruk, she elaborated this theory between math and emotions. We are bad at math because you cannot figure out subtraction emotionally. She said math has a lot to do with emotions.

I’ve heard that if you can play a musical instrument, you can speak a foreign language because the same part of the brain is used for both things.

That’s probably true. It’s something I am thinking about. I’m making a film now with Neil Jordan in Ireland. I’m supposed to play the piano. I study the piano every day. And recently, I found that I work music the same way I work my English. Sometimes when I say a line—say the words together—I have to say them very, very slowly. It’s the same process as I work the music: very, very slowly to really understand it. Every music teacher in the world will tell you that, in order to play the music, you need to do it slowly. In English, if I have a hard time saying the line and you say it slowly, you can say it. I understand the comparison between music and foreign languages. It makes sense.

Speaking of reading, this is a loose, and gender-bending, adaptation of Robert Louis Stevenson’s novella. What do you like to read?

I real all the time. I can’t imagine my life without reading. Novels, mostly. Right now, I’m reading a book by Neil Jordan, The Drowned Detective. He’s a very good writer. I’ve been reading new French books recently before they are published. A life without reading is impossible for me. Each book is like a promise. They create a whole world with nothing but words.

You play characters who project intelligence. Marie’s students, the school principal, and others frustrate her. Are you generally no-nonsense like Marie? I guess I’m curious to know if you identify with her in any way?

I found out something about myself recently. I have no consciousness as an actress or a person of how I am. I’m being told by people who or what I am. I think Madame Hyde is what she is and does what she does, but she has no consciousness of her superpower. She doesn’t know. It’s because she is a teacher that she has this power, or Serge as the director gives her this power. It is what he wants to transmit: the superpower of knowledge, the superpower of education, the power of what it means to exist.

As an actress, what I do is not something that I really think about. It’s what I do. I think it’s only the mise-en-scène that gives you the answer to whatever you seek. You can think about it endlessly before you do the film, but it will never give you the answer. As you do it, it will give you the answer. No theory in the world can give you an answer to your question. I don’t have a problem with that. A lot of time it’s who you work with. That’s essential. Once you trust someone, you hope they bring you the right answers.

The film addresses issues of race and class. What thoughts did you have about the critique of France in the film?

I think it reflects the harsh and strong reality of urban life. We shot in a lycée, which was exactly like the environment described in Mrs. Hyde. The film is completely unrealistic in the sense that it’s crazy and imaginary because a science teacher transforms herself into this bionic woman at night, but the political and social environment that the film is rooted in is real. This is where we shot in the banlieue, the suburbs of Paris.

Can you describe how you developed Marie’s body language, which suggests so much without words?

I have to find a certain way for each character. I don’t really think about the body language. If you feel the interior feeling and truthfulness of the character, the body language follows. You can’t disconnect and say I’m going to walk like this. On the contrary, if it’s completely clear, the body language falls. I was with Chantal Ackerman when she was asked, “Where did you find this character?” She said, “In my shoe!” It was supposed to be ironic, but it was so true. In Madame Géquil’s case, the way she’s dressed and the shoes she has—she’s not the kind of woman who walks with high heels—we looked for a certain type of dress [fashion style] to make her believable. We had freedom to imagine this obviously unique character who doesn’t look like anyone you’d meet in the street. It’s weird the way she was dressed.

You had several films coming out in the past few months, Happy End and Souvenir among them. What accounts for your strong work ethic?

I just work often, and sometimes all the films come out together. I’m privileged to keep finding material that is always new to me. I’m very choosy. What I do, I want to do, and nobody forces me, nor do I do anything that I’m not deeply convinced that I should do.

Review: The House of Tomorrow