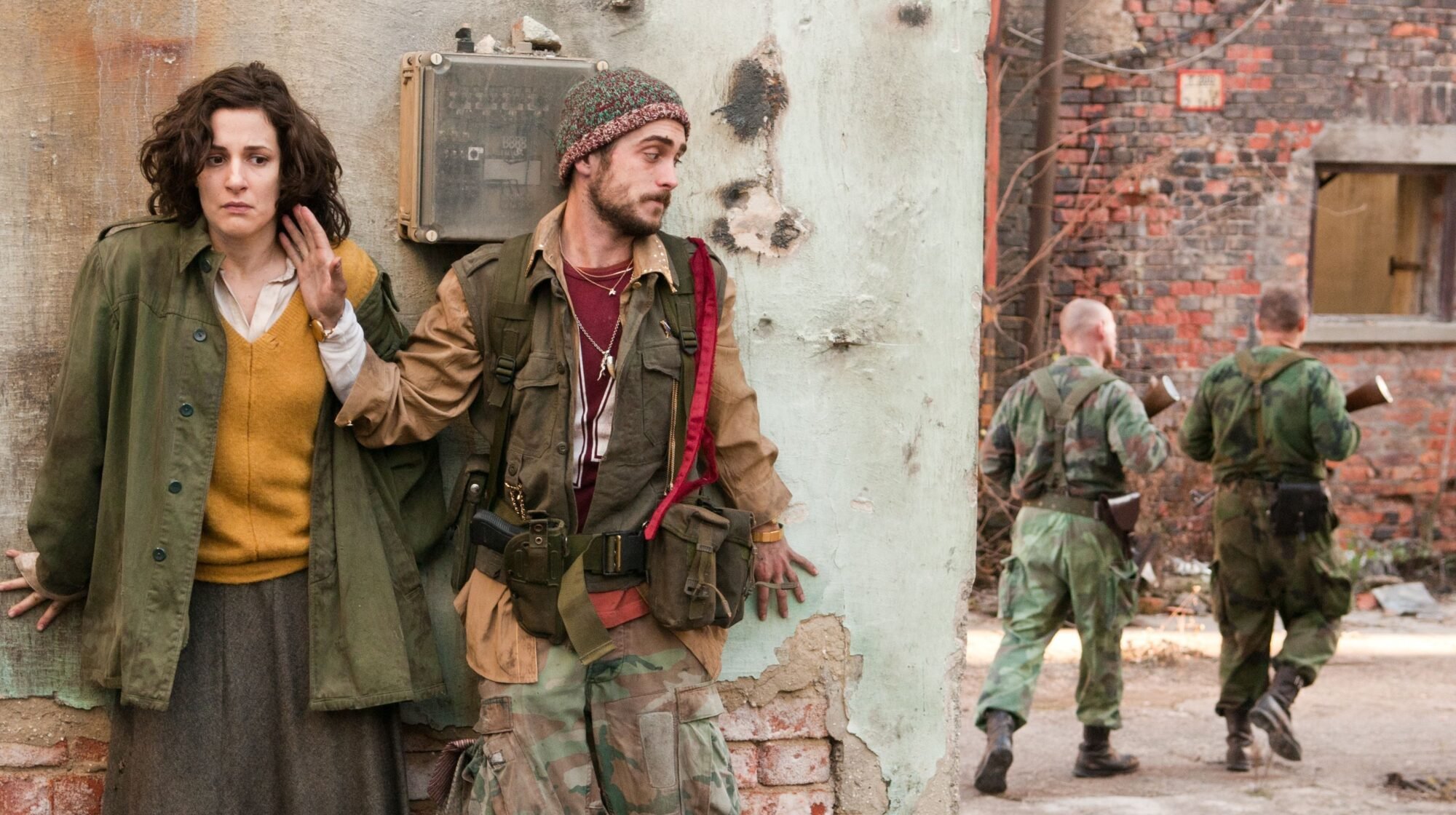 The challenges of making a film about historical atrocity are notoriously knotty. The director must convey the full force of horrific action without lapsing into either prurience or numbing repetition, while the film needs not only depict these terrible acts, but provide some kind of larger understanding as to why they were perpetrated. While Angelina Jolie’s Bosnian War-set In the Land of Blood and Honey can’t claim to fulfill either of these conditions, it deserves credit for one thing: It refuses to soft pedal the horrors committed by Bosnian Serbs against their Muslim neighbors in the early-to-mid-‘90s. In fact, with the exception of the agonized main character, Danijel (Goran Kostić), and another minor character, a naïve true believer, the Bosnian Serbs are uniformly monstrous and Jolie assaults us with a barrage of brutal rapes, baby killings, and point-blank murders, which Jolie frequently presents in all their unvarnished viciousness.

But when does intensity and commitment supersede historical understanding? After a while, Jolie’s catalogue of horrors begins to feel less like a necessary addition to an underconsulted historical record and more like a numbing assault on the viewer. Yes, we need to know that these things happened and we need to feel their full force, but stoking outrage can only achieve so much unmoored from historical understanding. Granted, Jolie fills her film with contextualizing English-language news broadcasts (the rest of the film is in Bosnian) and addresses the poisonous legacy of Serbian nationalism through the history lessons of Danijel’s father, the brutish General Nebojsa Vukojevich (Rade Šerbedžija), who treats his son to both a pseudo-philosophical lecture on Serb superiority and his own childhood reminiscences of Muslims wiping out a town. But this is pretty thin gruel for those hoping for any larger analysis.

Jolie’s point here (made clear in opening title cards) is that before the breakup of Yugoslavia and the jockeying for political control that ensued, the country was a relatively harmonious mix of varied racial and ethnic groups. The huge disruption to harmony that was the Bosnian War hits us with a crude thud in a pre-title sequence when a pair of would-be lovers joyously dances in a café before an explosion rends the place in two and leaves the couple near death. Fast forward four months and we learn that the pair’s love is doomed by their religious/ethnic differences, which all of the sudden matter greatly. The man, Danijel, a blue-eyed Serb, is a reluctant captain in his father’s army, while the woman, the Muslim Ajla (Zana Marjanović), is rounded up by those same soldiers and only saved from rape when she’s recognized by Danijel.

A sort of wartime Romeo-and-Juliet romance ensues, with Danijel providing Ajla special protection in the prisoner camp by naming her the official portrait painter of the army. As a depiction of love among the ruins, though, Jolie’s plotting is fairly underwhelming, devoid of any real emotional depth. With Ajla in particular an undeveloped figure, there’s not much stake to be claimed in the ups and downs of the relationship, the pairing often feeling like little more than a symbol for superficial difference getting in the way of love—no matter how often Jolie reaches for string-laden melodrama. Any dramatic tension in the storyline comes from Danijel’s conflicting responses, his innate goodness and desire to do right by Ajla as set against the pressures of his father’s brutal anti-Muslim feelings and the dictates of a war where the most inhuman behavior is not only expected, but rewarded. But even here, the character’s shifts between “good” and “bad” seem overly schematic and the central storyline feels at once underthought and overdetermined. Only the scenes of wartime brutality have any real resonance, but Jolie’s depiction of these ridiculously assaultive scenes ultimately seem as counterproductive as the narrative sequences were unproductive to begin with.

Review: The Flowers of War