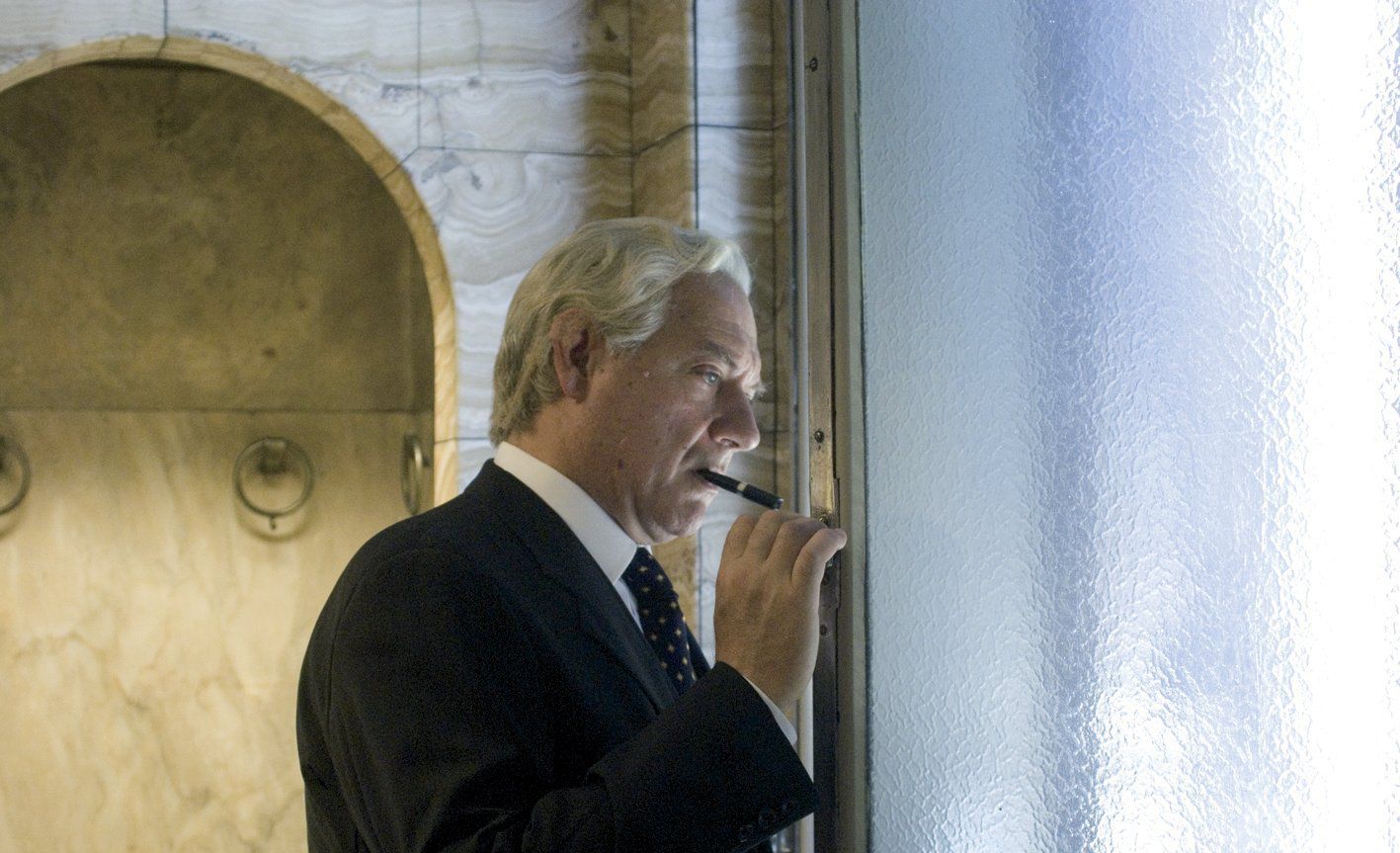 A baroque high comedy of endemic corruption, Il Divo doesn’t treat the early-‘90s scandal that brought down Italian Prime Minister Giulio Andreotti—and destroyed his long-lived Christian Democrat party—as a tragedy, thriller, or tale of long-delayed comeuppance, but with resigned wit and florid caricature. Andreotti’s nearly eternal hold on postwar power in Europe’s most consistently ridiculed government—he became a major figure in the ‘50s and today remains a Senator for Life—culminated in the uncovering of a byzantine supermarket of influence known as “Bribesville,” which involved the Mafia, an exclusive Masonic lodge, bankers, the Vatican, and every organ of the state (inspiring an incoherent plot strand of The Godfather Part III).

Toni Servillo’s chilly, Machiavellian embodiment of Andreotti cuts a recessive, undead figure; shoulders raised in a shrugging hunch, ambulating with monastic stillness. It’s like a clown’s satirical pantomime of power, or Peter Sellers playing a vampire. Twisting his wedding ring in boredom, gazing owlishly through Coke-bottle lenses as he listens to advisors, Servillo’s sedate physicality sets a tone of everyday venality, conveying the brand of governing cynicism that masquerades as pragmatism. To his confessor, Il Divo—originally a mocking nickname for the allegedly divine Julius Caesar—shrugs a Rumsfeldian “One fights a war with the soldiers at hand.” “Your irony is abysmal,” retorts the priest.

Writer-director Paolo Sorrentino even bores in on the large expanse of flesh between Servillo’s upper lip and nose to suggest nothing so much as the absence of a mustache; Andreotti is a Nowhere Man merely greasing the gears of perfidy, not some dark visionary. Swooping dolly shots and CGI-augmented montages chronicling Bribesville’s body count—one suicide flies from a window, screaming face zooming toward the screen in Looney Tunes fashion—keep the grisly cost of doing business at a stylized remove, just as the prime minister, walking Roman streets in the wee hours with an automatic-weapon-toting security detail, can only exchange blank looks with early-morning deliverymen. Flavio Bucci as Andreotti’s exuberant strategist and Anna Bonaiuto as his equally unflappable wife (“I know what kind of man you are,” she flatly intones after his indictment) add amoral flavor to the dense cast and busy narrative; the other players, even in Il Divo’s inner circle, are often small, trivial figures crossing massive plazas or cavernous palatial spaces, with slow-mo and the odd gargantuan low shot to capture their swollen self-images.

Occasionally Sorrentino’s grab bag of visual stateliness and absurdist punctuation overreaches, as when Andreotti’s lengthy palace staredown with a cat only acquires sketchy meaning when echoed by his reluctant ritual kiss with a Mafia kingpin. And the prime minister’s storied charm is hardly in evidence; he receives supplicants in his study, amid a familiar chiaroscuro of deep shadow and pools of lighting familiar from the Corleones’ mansion, but plagued by migraines and inured to flattery, there’s nothing seductive about him. The standout pivotal scene is a ranting confession of culpability in the service of the greatest good—evil, extended to complicity in murder, as a means to fulfilling divine will—that seemingly functions as Sorrentino’s thesis statement. Through its end-credit cataloguing of Andreotti’s convictions being thrown out (set to the plinking monotony of Trio’s “Da Da Da”), Il Divo expresses not outrage, but an acerbic bemusement. It’s a quintessentially Italian mirror that could never be mistaken for an American model.

Review: Throw Down Your Heart