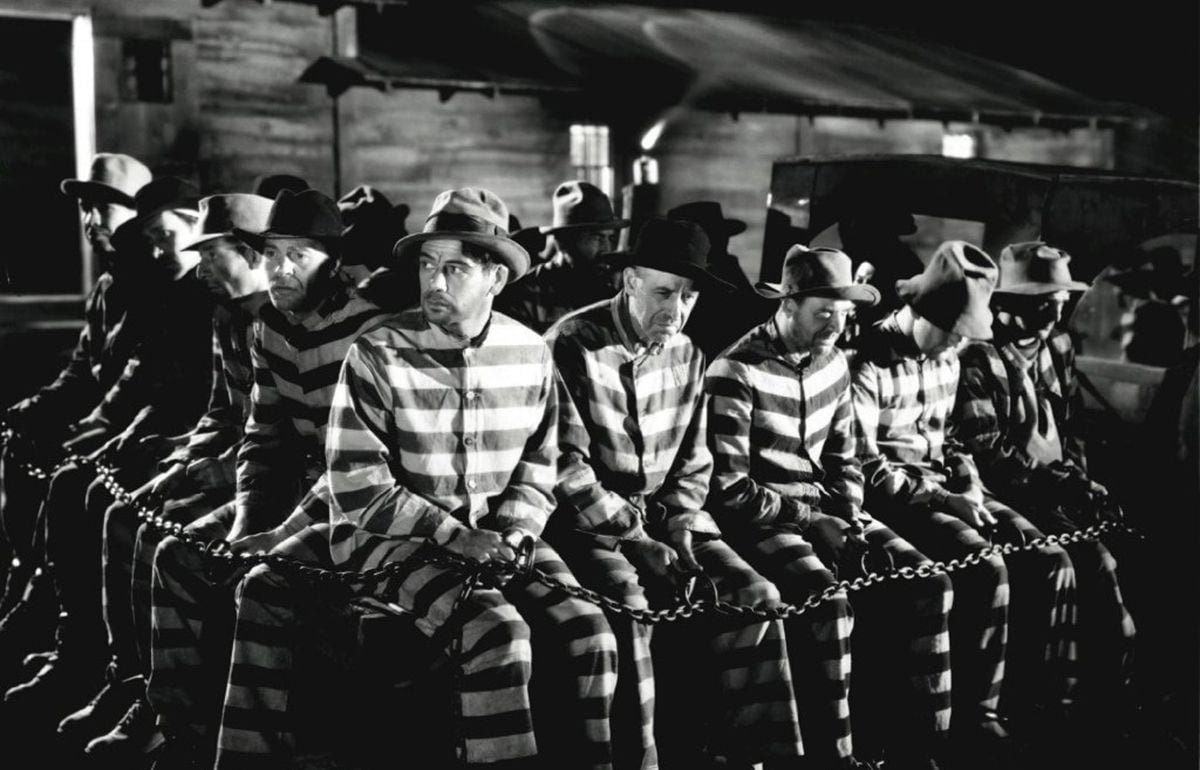 Maybe it’s the cynic in me, but I never felt convinced Warner Bros. cared as much about solving social injustice as they did presenting tough, lurid, lapel-grabbing narratives that would pack audiences into theaters. Nevertheless, they were able to have their cake and eat it too with films like I Am a Fugitive from a Chain Gang, which was instrumental in swaying public opinion. The inhumanity and soul-crushing horrors of slave labor in the penal system, where the gruesome punishment didn’t fit the crime, is neatly interwoven into a highly gripping plot that still holds up today. It feels more like an uncompromising prison film than a message movie, so its frequent heavy-handedness seems more like unabashed pulp rather than sanctimony.

World War I veteran James Allen (sweaty and paranoid Paul “Scarface” Muni) comes home and suffers the humiliation of seeking a job in the Depression era, even rejected when he attempts pawning his war medals only to discover a hundred other guys already had the same idea. He becomes unjustly imprisoned, and rather than playing up the “wrong man” angle for suspense, Fugitive shows a series of degradations in prison so bluntly it incites the viewer to moral outrage. From before dawn to after dusk, the convicts are shipped out to a slab of rock to chip away all day long, enduring beatings from the sadistic guards. When a man gets horsewhipped off-screen, the camera pans along the faces of convicts listening to his screams—an effect far more haunting than if we saw the torture. One look at the plate of inedible gruel they’re doled out for breakfast and dinner, then a glance at the way the prisoners are chained like animals, and you’re 100% behind Muni’s desire to get the hell out of there.

The prison scenes are blatantly manipulative—and effective—but Fugitive really takes off during an intense escape sequence, including a close shave where a near-doomed Muni hides underwater as his above-water captors are literally inches away from him. When Muni arrives in Chicago, he stays at a flophouse and spends the night with a pre-movie code prostitute in a tight dress who sits in his lap and whispers in his ear, “You’re among friends.” The studio portrayal of sex and violence in Fugitive pushes the envelope more than Muni’s previous Scarface, perhaps because its so casual.

There’s bleak humor in the fact that the only job Muni can get is as a road laborer swinging a pick-axe, and even as he quickly gets promoted rapidly he finds himself in another prison: a calculating bitch (Glenda Farrell) who forces him into a marriage in exchange for keeping his chain-gang secret, then proceeding to spend all his money (and then some) on booze and an endless line of extramarital affairs. Only with a character as noble as Oliver Twist or David Copperfield are people able to endure such misery, and Paul Muni plays a character so single-minded in his pursuit of freedom, so damned anxious for even the smallest victory, that he makes Fugitive absolutely riveting. And the movie really shows its balls during its climax, where Muni is forced to go back to the chain gang and plan another daring escape. When he gets out this time, though, Muni looks like a scurvy rat that’s nearly drowned. Asked how he survives, he backs away into the darkness seething, “I steal!”