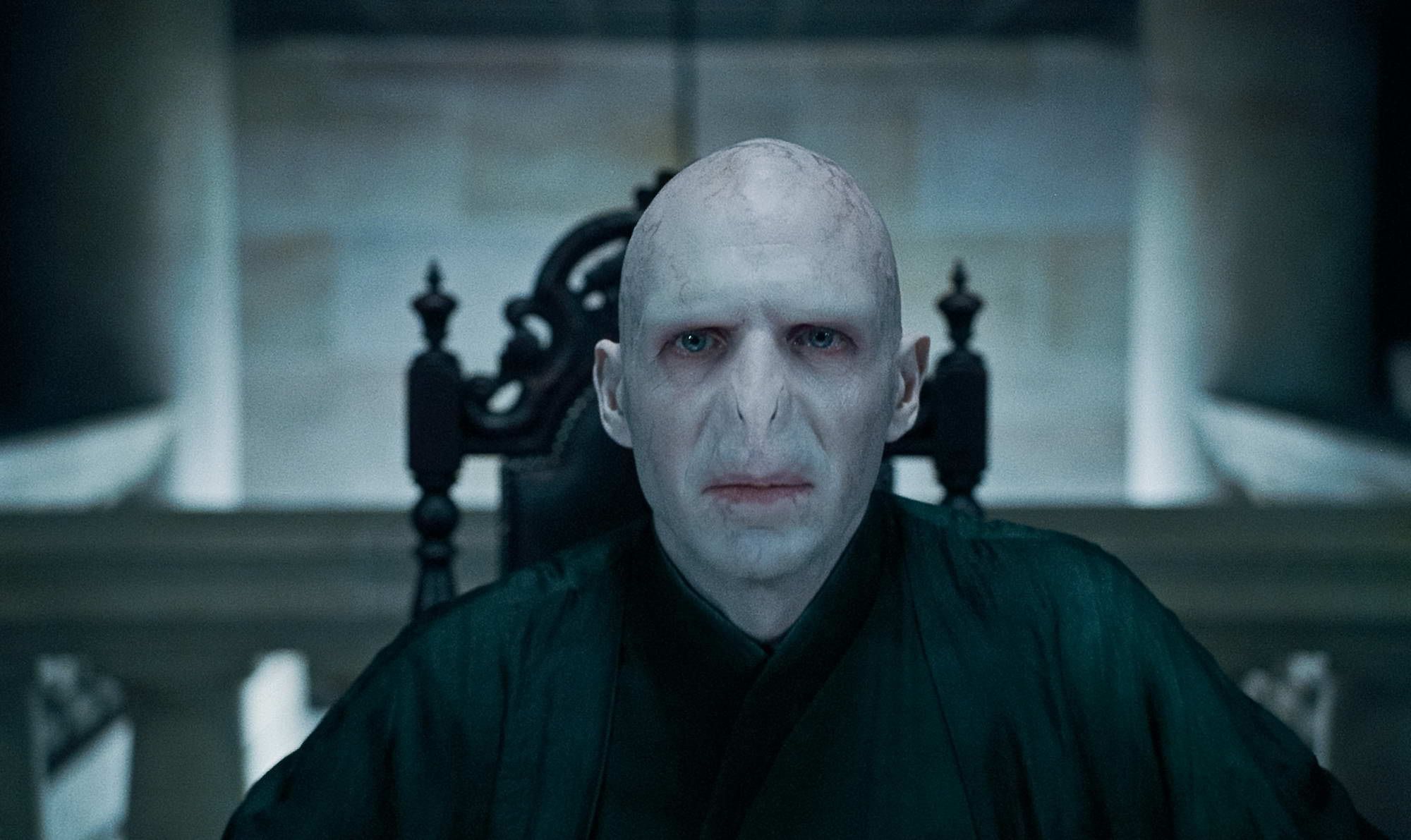 In Harry Potter and the Torturous Moping, er, Deathly Hallows, Harry and best pals Hermione (Emma Watson) and Ron (Rupert Grint) go on the run from evil Lord Voldemort (Ralph Fiennes), who having had Hogwarts headmaster Dumbledore assassinated (by Alan Rickman’s traitorous Snape) in the prior Half-Blood Prince, now seeks global domination via the murder of the boy wizard. With the ministry of magic under his control and transformed into a Third Reich-style government bent on persecuting humans and half-human “mudbloods,” Voldemort has cast a reign-of-terror pall over England, which director David Yates visualizes through a color palette made up of blacks, grays, and lesser grays. As the film’s tagline suggests, “nowhere is safe,” so the three heroes flee to the remote countryside and forest, where they set up tents, debate how to find and destroy “Horcruxes”—for you non-Potterphiles, those are enchanted objects containing fragments of Voldemort’s soul—and generally fret about their on-the-lam circumstances. When during this do-nothing period Ron freaks out at Harry for being clueless about how to save them, as well as for supposedly putting the moves on Hermione, his rage is at once misplaced (Harry’s no amorous backstabber!) and yet completely justified, as it’s all too easy to relate to frustration over such a static, navel-gazing scenario.

Except, that is, unless you’re one of the Harry Potter faithful, who will surely appreciate Yates’s continued fidelity to his source material, which is so great that this Deathly Hallows is merely Part One; the concluding segment of J.K. Rowling’s seventh novel won’t appear until next summer. Yet such dedication to accuracy proves an anchor weighing down these proceedings, with countless sequences practically begging to be trimmed so as to kick up some much-needed momentum. In this regard, Yates is not all that different from Chris Columbus, whose first two Harry Potter films were similarly fixated on exacting reproduction of Rowling’s tomes above all other cinematic concerns. Aside from an intro airborne ambush and a skirmish with Helena Bonham Carter’s sorely underutilized Bellatrix Lestrange, whose unhinged malevolence briefly enlivens the climax, Yates’s film is a thoroughly inert affair, and even in those more action-packed moments, the director sabotages any potential tension and excitement by editing his CG-heavy centerpieces to ribbons. For all its self-conscious panoramas of doom and gloom, there isn’t a single memorable image or incident in Deathly Hallows, just a few drearily derivative sights (like Harry facing a room full of lookalikes, or his smeary recurring dreams about the past) and the diminishing-returns banter of lovebirds Ron and Hermione.

As with its predecessors, Deathly Hallows’s narrative is driven by gobbledygook devices: supernatural totems, indestructible weapons, enigmatic incantations, and vital symbols that hold the key to unlocking the secrets of aged myths. Two fleeting incidents—one involving the trio disguising themselves as adults to infiltrate the Ministry of Magic, the other featuring Ron being confronted by a horrifying vision of Harry and Hermione making out in the nude—capture a stinging sense of adolescent maturation. However, instead of focusing on its characters’ tumultuous feelings, such as Hermione’s grief over erasing her parents’ memories of her, or the sadness that overwhelms a momentary Harry-Hermione dance to Nick Cave’s “O Children,” the film largely fixates on the investigation and use of magical thingamabobs, which in and of themselves hold no meaning and thus reduce the narrative to a series of perfunctory mysteries. Even the scenic vistas of the apocalyptic English hillside, often punctuated by zooming aerial cinematography over land and sea, come off like stale leftovers from The Lord of the Rings, an impression also advanced by the participation of loyal house elf Dobby, who until his tragic last breath (in a scene that fails to pack any emotional wallop) remains a far cry from Gollum.

Yates not only delivers all setup and no payoff, he delivers a setup that’s neither thrilling nor consequential. Rather, this incomplete cliffhanger of a tale hardly gets the ball rolling toward its inevitable Harry-Voldemort showdown, unless one considers as significant progress Voldemort acquiring a Very Important Wand and Harry and Ron squabbling and then, through plotting that might generously be dubbed “slapdash,” reuniting in the nick of time to acquire a Very Important Sword and make nice-nice with each other. Toward film’s conclusion, an inspired sepia-toned animated interlude about the legend of the Deathly Hallows (crafted by Ben Hibon) provides a jolt of unique visual splendor to match the ominous foreboding of Alexandre Desplat’s sinister score, not to mention features striking silhouettes that exude more personality than does the cast’s usual gaggle of esteemed British thespians. Alas, that sequence is also, from a storytelling standpoint, so excessive (a concise verbal recounting of the fable would have sufficed) that it merely exacerbates the overriding impression that this final Harry Potter saga has been stretched egregiously thin over two features not to do proper justice to Rowling’s work, but simply to accommodate rabid fans and pad Warner’s coffers.