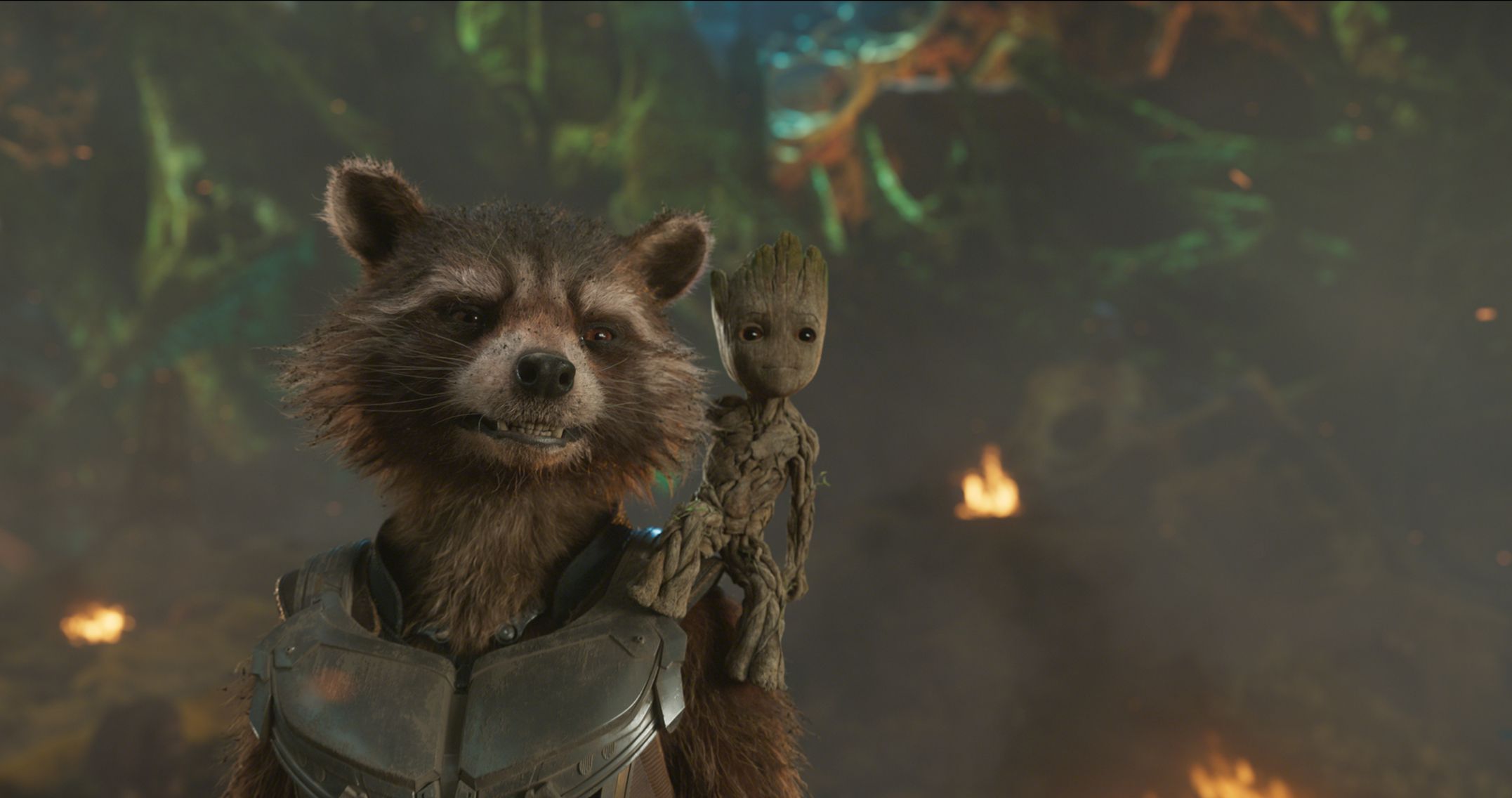 Given the relatively homogenous Marvel Studios style, it’s surprising how many of the studio’s sequels have diverged significantly from their predecessors in tone and look. Typically, the best of these (Captain America: The Winter Soldier, Iron Man 3) have explored more serious terrain than their preceding films, offering more sober glimpses at the consequences of superhero antics. Writer-director James Gunn’s Guardians of the Galaxy Vol. 2, however, is the first instance of a Marvel sequel bettering what came before simply by escalating the scale of its action. Like a live version of one of the classic rock tunes that fill the soundtrack, the film rarely deviates from what came before, and in some cases might even be a bit sloppier, but it offers enough added volume and energy to improve on the original.

The soundtrack, as it did in Guardians of the Galaxy, shapes the film not only in its musical beats but its narrative ones. Gunn largely structures the film as a mixtape, linked by an underlying theme but frequently discombobulated by the story’s sudden lurches in unexpected narrative. The frivolity of the action is laid bare in the opening scene, in which the camera remains focused on a dancing Baby Groot (Vin Diesel) as the rest of the Guardians fight a colossal, many-toothed creature in the background. Other sequences largely act as ways for Gunn to experiment with how to shoot a large-scale blockbuster, and the freedom exhibited by these scenes is striking when set against the frequently bland, interchangeable sequences in other Marvel productions.

Two sequences stand out for their ingenuity and panache. In one, Rocket (Bradley Cooper) single-handedly fends off waves of attackers using booby traps, as well as his size and ferocious combat skills. In the other, wayward space pirate Yondu (Michael Rooker) effectively deals with a mutiny using an arrow that he can control with his whistling. As he walks through the ship in slow motion, his whistling sends the arrow through dozens of his rebellious crew, its red vapor trail creating doodles in the air as it darts to and fro. Both scenes are, compared to the colossal space battles that fill a decent portion of the film’s runtime, modest affairs, yet each shows a clever, imaginative visual approach that Marvel is only now letting its directors bring to the table.

If such scenes largely lack all but the most perfunctory connective tissue, the emotional through line of the Guardians’ makeshift family provides an unexpectedly strong undercurrent for the overall narrative. This idea is explored most thoroughly in the discovery of Peter’s (Chris Pratt) father, an immortal demigod named Ego (Kurt Russell). The first postmodern action star, Russell was adept at pushing hoary clichés of heroism and villainy into self-mocking extremes, all while casually subverting those same traits with leftfield revelations of inanity or cowardice that revealed a deeper sense of satire. As Ego, he blends the sentimental treacle of an estranged father connecting with his child with the dispassionate narcissism of a life-creating deity far removed from normal emotions. Russell brings his unguarded sense of self-parody to bear throughout: In one scene, Ego comes across as a giddy dad when he plays a ludicrous game of catch with Peter using a ball of pure energy, but elsewhere he radiates the subtle but persistent smugness of an advanced creature condescending to mortals largely to boast of his accomplishments, suggesting that he’s not quite who he says he is.

Certain recurring tics of this franchise continue to be too cute by half. Groot already felt like a gimmick in Guardians of the Galaxy, but in his reverted child form he stops numerous scenes dead in their tracks whenever he makes an adorable face or attempts to tug at our heartstrings with his welling eyes. And Drax (Dave Bautista), the tactlessly blunt but loyal warrior, is reduced to bursts of forced comic relief that typically involve him boorishly guffawing at the embarrassment of others. He ensures that the film crosses the fine line between obliviousness and mean-spirited mirth, and only occasionally does he regain the complexity he displayed throughout the original.

In short, the same slipshod quality that gives the Guardians of the Galaxy series its irreverent tone can also actively undermine the material with repetitive jokes and an aggressively cutesy vibe. Nonetheless, Gunn’s unique action scenes and the palpable chemistry of the lead actors continues to make this Marvel’s most entertaining franchise, and a final act that delves into the relationships and hang-ups of numerous characters marks the finest sustained act of emotional storytelling to grace one of the studio’s films.