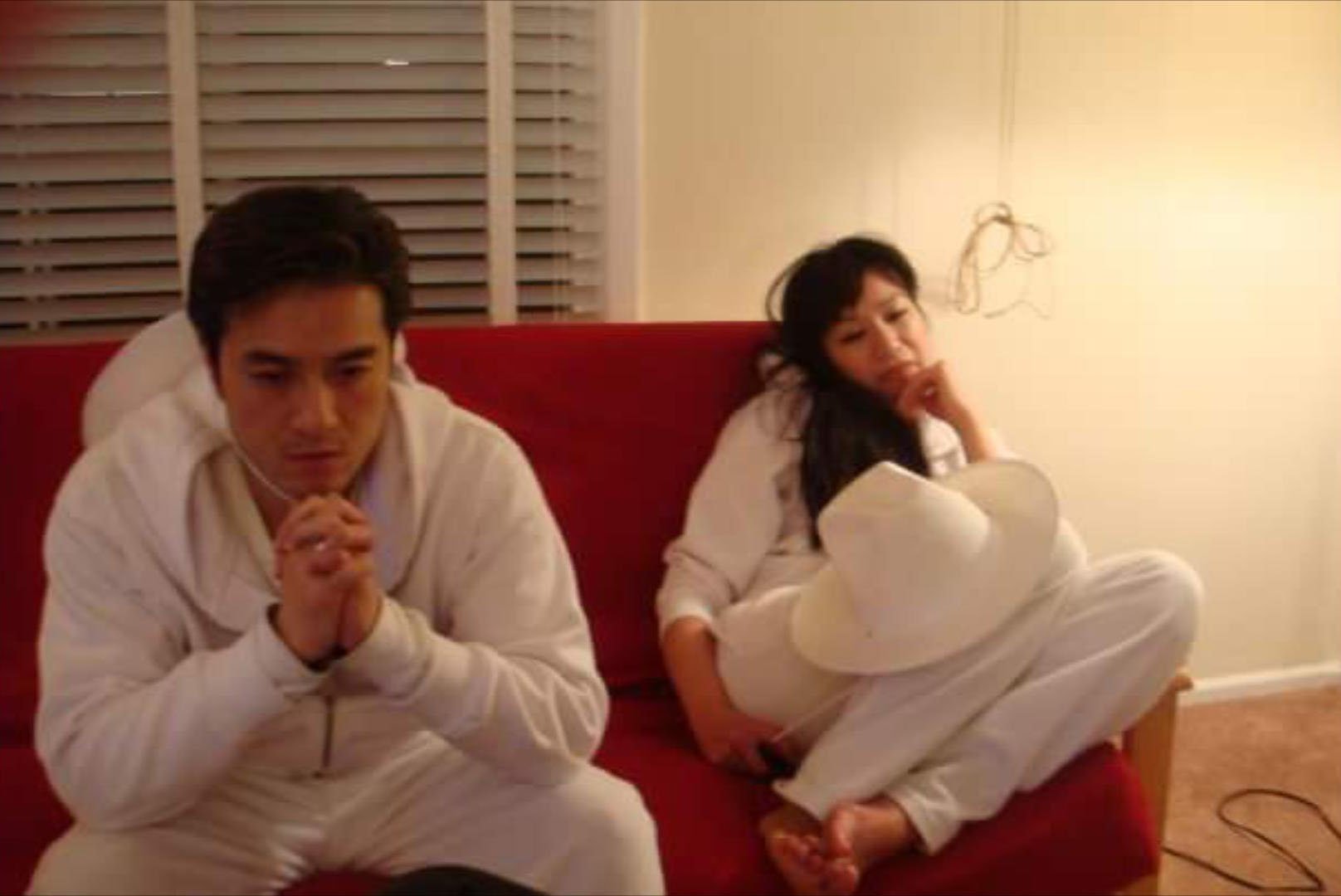 Days Sixteen and Seventeen. My God, just when you feel like you’ve got a hold of something, or you’re moving forward at a good steady clip and sense that karma is on your side, things can rapidly take a turn for the nightmarish. Day sixteen is easily, without a doubt, the worst and most painful day of shooting on God’s Land. After a week of scheduling with the actors and striking out with his location scouts, our fearless director Preston Miller suggests we just go into a famous department store chain, head straight to the grocery section, and proceed to steal shots there without benefit of insurance, paperwork, clearance or permits. I’m no coward when it comes to this stuff, but it’s an insane proposition when you’re stealing shots involving over a half dozen actors, most of them Asian-Americans dressed in white cowboy hats, hoodies and sweatpants—and involving three pages of solid, crucial dialogue—and involving child actors—and involving said child actors crashing shopping carts together for fun. Trying to shoot something like this is just madness—maybe even stupidity. Maybe we could have done it another way; but we decided to go for it to get those scenes completed and behind us. 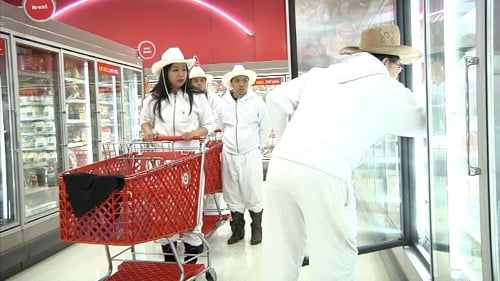 At this point, Preston is a man on a mission. Half the principal cast is going away for summer vacation soon. After these scenes, we have only one major location to shoot out and a handful of minor, incidental moments, many of them part of a montage. Refusing to take no for an answer, or succumb to sweet blessed reason, Preston pushes the team forward and shuttles everyone out to Long Island, directly to his house, to rehearse a grocery store sequence where Teacher Chen (Jackson Ning) shares his philosophy with Xiu (Jodi Lin) while his cult members push along shopping carts and gather whatever provisions their guru’s magical ring suggests they buy. They work the scene over and over again at Preston’s house.

I’m scheduled to arrive later in the day after a teaching commitment in NYC, so I miss out on Preston’s stress-out. Our assistant director Alex Gavin and production manager Alex Blakeley try to keep our director on track when they arrive at the shopping mall, but after quickly blocking the scene (illegally) in a shopping aisle, Preston quickly gets overwhelmed by the sheer number of security guards and managerial staff swarming around us. It’s a series of start and stop filmmaking where they hide the camera in a shopping cart and try to sneak their way through entire shots. But when you’re dealing with a long, dialogue-driven scene with a cast this size, it’s not easy. It moves slowly; most of the time is spent standing around waiting for the moment to shoot. 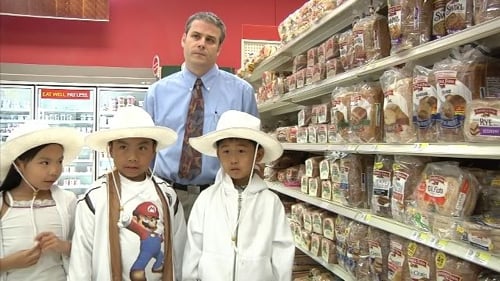 I arrive on location and already, a manager type is talking with our assistant director—I think we’re busted. But no, it turns out this manager is, in fact, an actor Preston has worked with many times before named Johnny Fido—he looks the part so much, shoppers continually go up to him for information. I think at one point Johnny breaks away from us to scout out the store so he can answer their queries. Anyway, Preston has barely gotten any shots in the can, and the main one that covered the most script pages is unusable because the actor playing the cult leader’s son has his hoodie unzipped with a Super Mario Brothers picture clearly visible.

I doubt Nintendo would sue Preston, since it would be like drawing blood from a stone—but any potential producer would red flag the scene because it’s a lawsuit in the making. A character named Jesus who is the son of a cult leader sporting a Mario Brothers insignia is not the kind of publicity Nintendo wants, frankly. Preston will either have to (a) not use the shot, from his very limited coverage, (b) blur out the T-shirt COPS style, or (c) use the reverse angle as a master. Preston’s response is a bitter round of cursing and expletives, not directed at anyone but himself. We can’t reshoot because the security guards and managers have closed in on us, and a tough looking female manager tells Johnny Fido, who looks the most in charge out of any of us, that shooting is not allowed here, and we can walk out of their place of business or be taken out by security.

So we leave, breaking for lunch, and Preston is a nervous wreck. He was at that location for over three hours and only has two shots to show for it, one of them possibly unusable. I am unsparing with him and say he has to pull himself together because the cast and crew look to him to see how to behave. If he is harried, they’ll get nervous. If he’s strong, they’ll be strong for him. Preston nods his head, clearly wondering how we’re going to get through this ordeal. 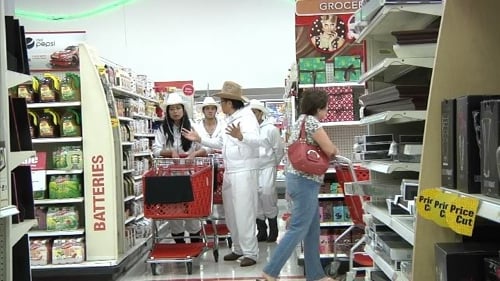 The next stop is a different branch of the department store chain, which has slightly smaller aisles and more staff running around—so we remain in a hostile environment, the crew moves around in circles spotting for managers in their bright red shirts, and the cast struggles to preserve their focus while filming under the miserable conditions. At one point, the assistant director and I hold up giant posters to block the aisle so Preston can film close-ups. When it’s all done, Jackson claims that the whole shooting day was distracting, and he hopes he was able to deliver a full performance. I suspect he was, though—he’s a dynamic actor and seems incapable of playing false.

When we go back to the controlled environment of Preston’s house, we’re able to quickly bang out a series of scenes and everyone has a lighter spirit about it—at least until we have scenes involving the cockroaches that our child actors Brandon and Caitylyn Suen have to stomp on, then carry into the kitchen and place on the divan. At first, they’re squeamish about touching the bugs, but when Preston and I show them how harmless they are (they mostly just squirm in one’s hand and try to crawl away really fast when in danger) they are fine with it, and the scene where they count the number of dead cockroaches seems like a demented version of Sesame Street: “One…two…three…four…four dead cockroaches!” 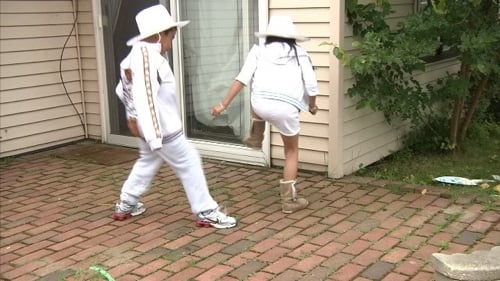 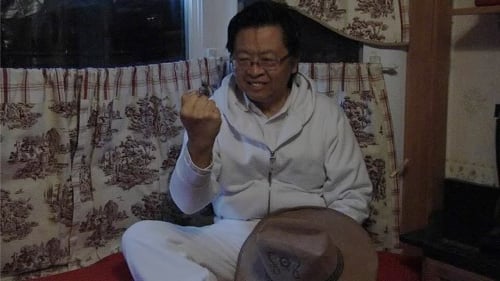 Jackson Ning has a big dramatic scene for Teacher Chen involving the cockroaches, and he complains at length about them—making up an elaborate story about their pincers and how they might burrow into his arm. Sometimes it’s difficult to tell when he’s being sarcastic, since he has a consummate poker face. But when the camera is ready, Jackson fearlessly uses the live insect as a prop and has a “crisis of faith/communion with God” scene that ends with him standing up and donning his cowboy hat like an old gunslinger ready to do battle—“I’ve still got it!” is how Jackson describes the teacher’s epiphany.

The crew has a beer with Preston and we talk very little about God’s Land, waxing enthusiastic about films as diverse as Kathryn Bigelow’s The Hurt Locker and Jean-Luc Godard’s Weekend. It feels good to have a pint or two and take a breath. Preston is back in good spirits after the shooting at his house. 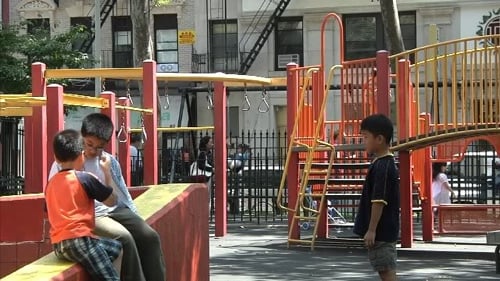 The following day starts off right, with scenes shot in a Chinatown playground where our lead actor Shing Ka and I walk around asking kids if they want to be in the movie. They have to bully Ollie (Matthew Chiu) and then ignore him, sending him back to his granny (played by Shing’s mother). Then it’s a long road trip through Sunday beach traffic as we try to hustle out to Long Island to shoot a couple of shots inside a movie theater; alas we arrive late and the manager is furious with us, barring us from shooting at his location. It turned out to be a gigantic waste of everyone’s time. But the cast and crew don’t take any aggression out on Preston simply because he looks so miserable about it.

He steps away for a while, then returns to the table where we proceed to eat Chinatown dumplings and beef and pork jerky provided by Mrs. Ka. She seems the least perturbed of anyone. As a woman who has fought against city hall for union rights and rallied her neighborhood to kick the junkies out of Columbus Park, a few delays in a movie are relatively low stress for her. On the ride home from our disastrous shoot, I have an enjoyable time talking about acting with Jodi and Shing, and even though I am disappointed with the weekend, I’m reminded of the talent and dedication of the people involved; they’ve become friends, and it’s always interesting how cast and crew form into a kind of makeshift family for the duration of a film. You learn how to go easy on one another; then you learn how not to go easy on each other; and then you go easy on each other again. 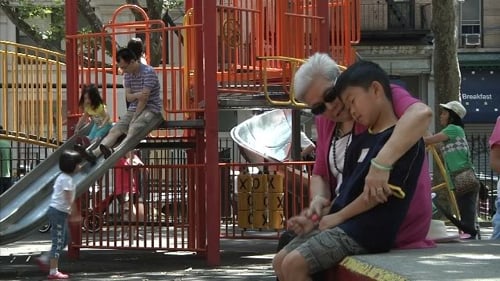 This article is part of a series of on-set reports on God’s Land, a feature film written and directed by Preston Miller.

Review: My One and Only