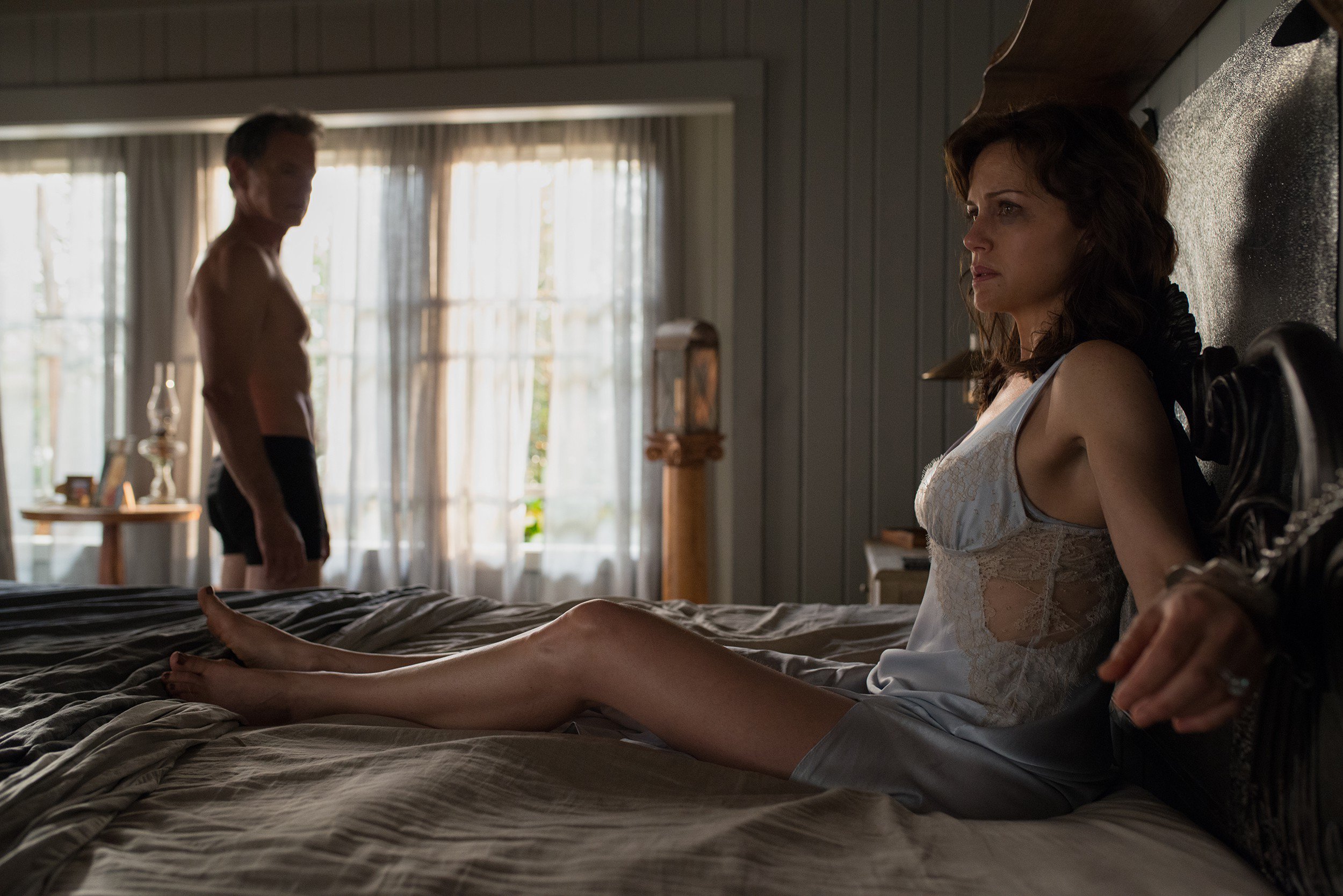 Based on one of Stephen King’s more uncomfortable cross-pollinations of pulp fiction and feminism, Mike Flanagan’s Gerald’s Game follows a heroine who’s driven to reexamine the patriarchal atrocities of her past so as to escape those of her future. Jessie Burlingame (Carla Gugino) is the beautiful trophy wife of Gerald (Bruce Greenwood), a wealthy attorney who takes her to their remote vacation house in Maine under the pretense of working on their troubled marriage. But Gerald actually wants to realize his fantasy of handcuffing Jessie to an elaborate headboard and raping her, though he drops dead at the beginning of the “game,” leaving Jessie trapped in bed and thinking of a pivotal day in her childhood when her father (Henry Thomas) sexually assaulted her. In both the book and the film, Jessie’s father and husband are bluntly understood to be iterations of the same kind of man, a manipulative predator who dogs women all over the world and who coerces Jessie into mistaking his desires and guilt for her own.

The premise suggests a lurid male fantasy that’s dressed-up with just enough pop psychology so as to render it politically reputable. The novel is guilty of the same hypocrisy as Gerald, as King gets off less on Jessie’s struggle than on meeting the logistical challenges of writing a novel set entirely in a single room. As imagined by King, Gerald is a sporadically aggressive schlep who resents the physical disparity between his wife and himself, as well as the fact that this gulf is bridged only by his income. In both book and film, Jessie’s role in this business deal is fashionably and predictably unexamined, as she’s a victim who’s ripe for redemption, a pitied foil for Gerald’s malice.

For about 50 galvanizing minutes, Flanagan transcends King’s scenario with shrewd and subtle revisions. As played by Greenwood, Gerald is now nearly as much of a babe as Jessie, with a body that belongs in the Burt Lancaster Hall of Silver Lion Masculinity. This alteration doesn’t merely ease the act of scrutinizing Gerald in his butt-hugging underwear for long stretches of the film; it also muddies Gerald and Jessie’s relationship, steering it into a more sophisticated realm of sexual power, bitterness, and resentment. Gerald’s rape fantasy is no longer just an implicit act of evening the sexual ledgers, as it now speaks to a deep and primordial urge to use a woman’s body as a conduit that allows a man to essentially fuck his own ego—a subtext that’s briefly voiced by the quotation of a nasty sexist joke.

The staging of the roleplay that entraps Jessie is a tour de force of pacing and performance. Flanagan doesn’t emphatically underline the perversity of Gerald’s domination, capturing the first stages of a potentially real rape in sinuous tracking shots that counterpoint Jessie’s terror and exposure with a formal elegancy that mirrors Gerald’s revolting self-absorption and smugness. If Gerald came on to Jessie entirely as a conventional sexual aggressor, and if Flanagan staged the scene with a more obvious sense of menace, the moment would collapse into absurdity. It’s Gerald’s superficial attempts at empathy—understood as a means to the end of hurting his wife—that are unnerving, particularly when he rubs his nose against Jessie’s in a way that suggests an alien’s approximation of human intimacy.

Jessie relies on her inner voice to get her out of the bedroom, which contains Gerald’s rotting corpse, a carnivorous dog, and a serial killer who may or may not be a figment of the dehydrated woman’s imagination. In the novel, Jessie’s voice manifested itself as a variety of acquaintances, but in the film her internal rationalizing is embodied by a more confident version of Jessie and, most resonantly, Gerald himself. He usually serves as the devil on Jessie’s shoulder, foretelling of her doom in bursts of macabre poetry that Greenwood delivers with sinister and weirdly erotic aplomb. Occasionally, though, Gerald helps Jessie to strategize her escape, poignantly embodying a dying woman’s fantasy of an abusive husband who can finally see his wife’s humanity.

Flanagan is an un-ironic humanist, which is rare in the horror genre. And this admirable quality trips the filmmaker up in the second half of Gerald’s Game, which pivots on Jessie learning to stand up to diseased masculinity. The contrast between Jessie’s past and present abuse—straight out of King’s novel—is so pat it brings to mind M. Night Shyamalan’s Split, which similarly peddled sexual exploitation as an inciting incident to be surmounted on cue. A crueler or more playful director, such as Brian De Palma or David Fincher, might not have staged Jessie’s awakening with such a straight face, instead finding the neuroses that are evaded by platitude. But Flanagan earnestly wants the audience to feel the protagonist’s empowerment, which culminates in an embarrassing climax that finds Jessie confronting maleness as literally embodied by a monster. Ultimately, Gerald’s Game is the rare Stephen King adaptation to be undone by the story itself.