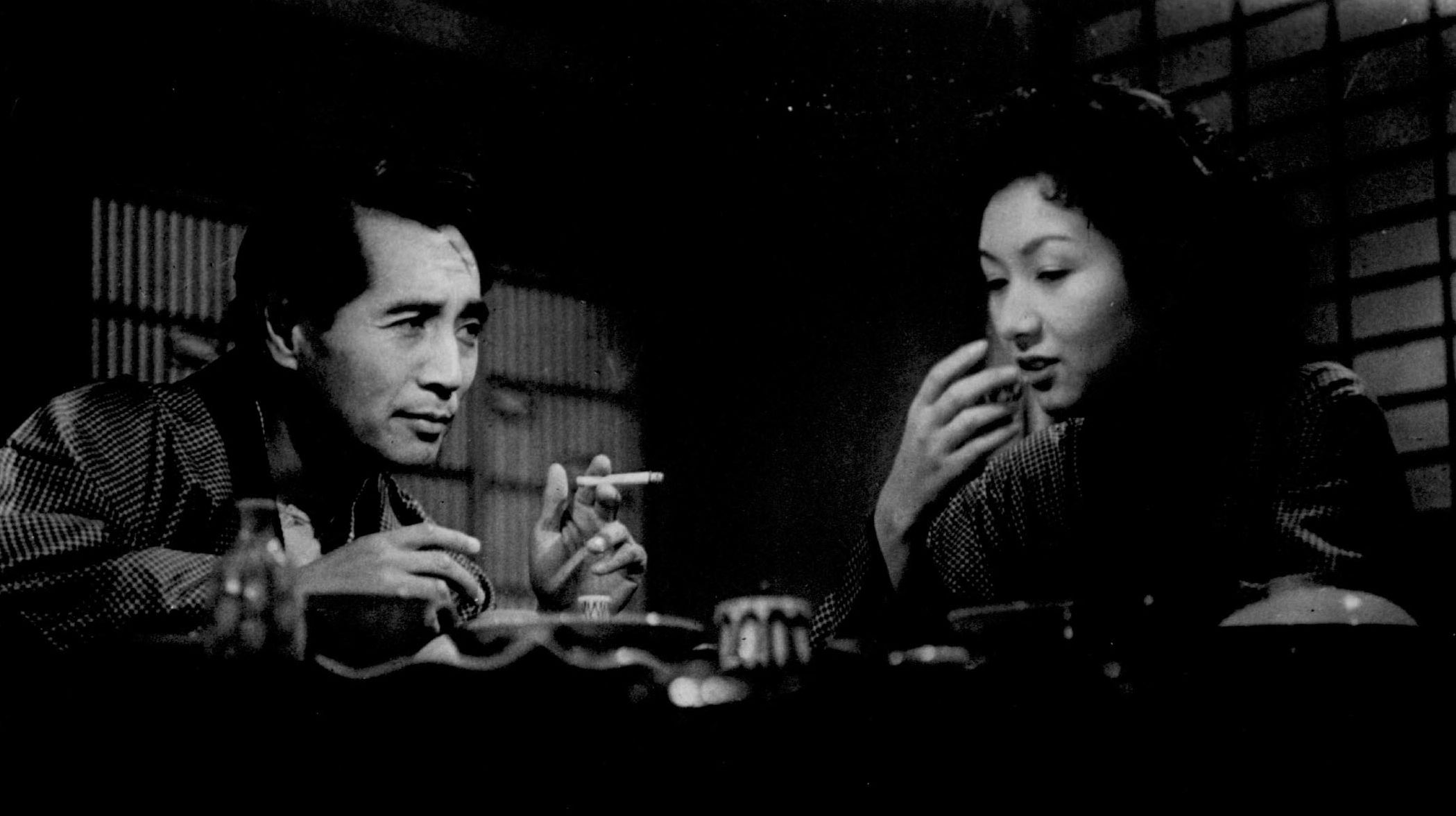 A frigid Naruse Mikio masterpiece, Floating Clouds charts the tempestuous love affair between the needy, often paranoid Koda Yukiko (Takamine Hideko) and the distant, emotionally stoic Tomioka (Mori Masayuki). The film opens post-World War II with Yukiko returning to Tokyo from French Indochina to rekindle her relationship with Tomioka, who’s living a quiet life with his sickly wife and seemingly views the wartime romance he and Yukiko shared as little more than a harmless indiscretion. Initially taken aback by her arrival on his doorstep, he nonetheless agrees to walk with her for a few minutes (indeed, much of the film is given over to observing the couple as they amble aimlessly along various city streets and country roads).

Accompanied on the soundtrack by a vaguely tribal, Middle Eastern-inflected musical composition (a satirically exoticized melody/motif that Naruse returns to and replays over the course of the film), the duo reflects on their first meeting in Indochina. Memory and current action seamlessly intermingle and Naruse concludes by brilliantly collapsing the dual timelines, smash-cutting, at scene’s climax, between the lovers’ years-removed embraces. It’s one of the more romantic sequences in movies, though Naruse quickly defuses the intoxicating sense of quixotic sublimity by instilling a plague-like imbalance in his characters. Neither Yukiko nor Tomioka ever feel similarly, as their love for each other creates only profound disharmony and antagonism, which leads them down a path of inevitable destruction.

As is so often the case in Naruse’s films, the characters use money as a manipulative trump card; currency is the key, in the director’s worldview, to possession and control of any given person or situation. As the lovers become increasingly estranged because of their vindictive back-and-forth, the viewer may feel an escalating sense of alienation and confusion. Yet I think this is exactly Naruse’s intent. He slowly distances us from the lovers and their actions (a colleague astutely described Floating Clouds’s ever-deepening sense of detachment as a precursor to Fassbinder) so that the film’s climactic progression of events—revolving around Yukiko’s prolonged tubercular death rattle—hits us all the more fiercely. And it’s only through the film’s luminous final close-up that we, like Tomioka, become aware of those very things callously taken for granted that are now tragically and irretrievably lost.