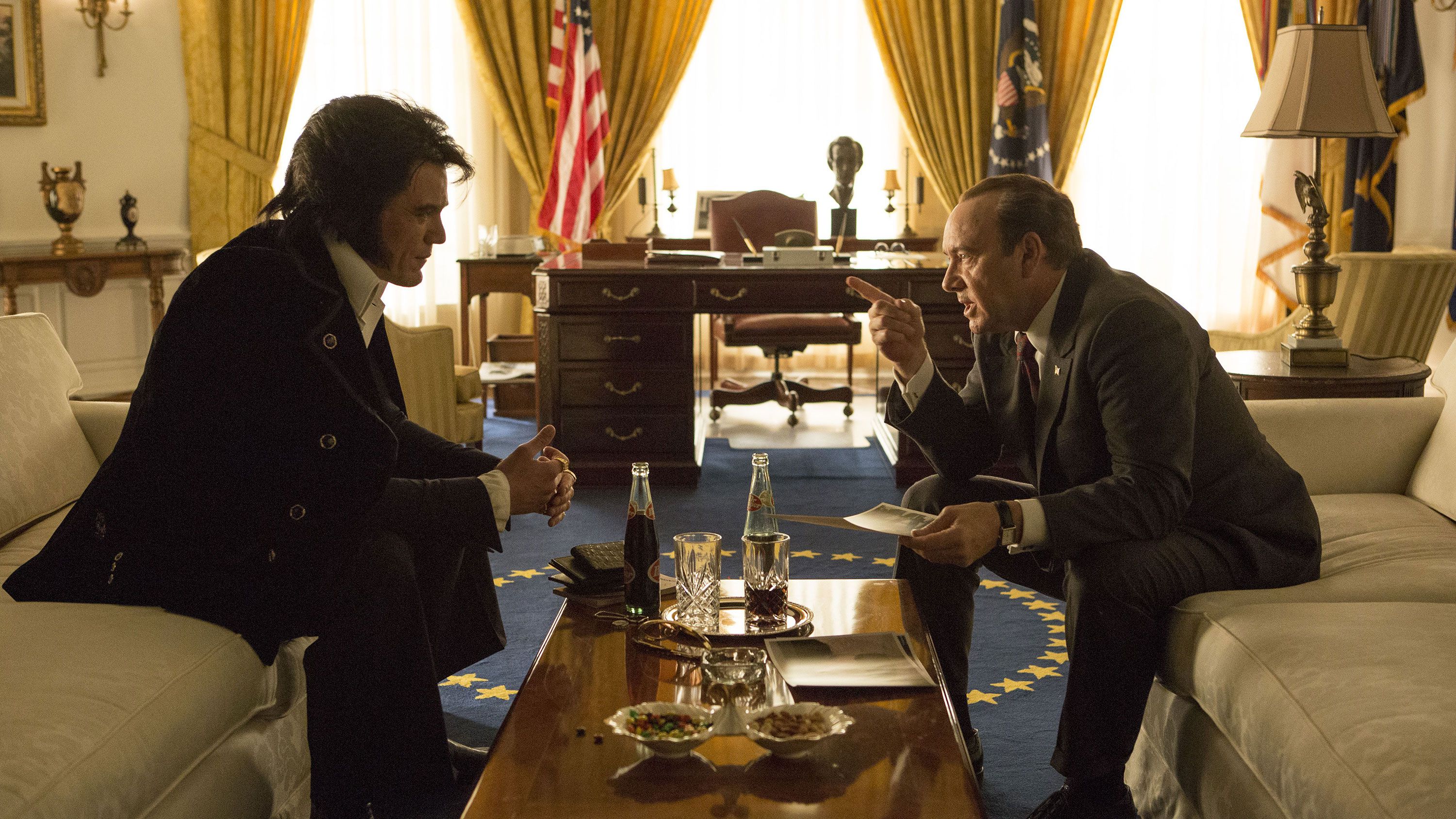 A lively comedy is struggling to get out of Liza Johnson’s Elvis & Nixon, though it never quite escapes the straitjacket of retrospective cuteness that often mars films about famous people, particularly those concerned with figures as prominent as Elvis Presley (Michael Shannon) and Richard Nixon (Kevin Spacey). The film’s premise promisingly riffs on how the picture taken in 1970 of the entertainer and the president of the United States came to be, outlining the logistics and titanic clash of egos involved. The narrative offers, then, a parable of the similarity of politics and showbiz, revealing the former to really be the latter with a patina of “seriousness” attached.

Presley and Nixon have more than fame in common, as they’re both men whose legacies are marked by controversy. Presley devolved into a pop-cultural punchline, addicted to pills and food, perhaps imprisoned in his own paranoia, while Nixon, no stranger to paranoia himself, resigned in the face of almost certain impeachment for his involvement in Watergate, and was pivotal in kick-starting the war on drugs, which administrators have since admitted began as a closeted strategy for imprisoning non-whites, political activists, and anyone else the government deemed threatening.

Elvis & Nixon hints at its subjects’ darker legacies. There’s a shamelessly politically correct scene in which Elvis, in Washington D.C. to meet with Nixon, stops by a black-owned donut shop and symbolically accounts for his music’s appropriation from African-American artists, who didn’t enjoy a millionth of his success. Elvis orders an “original” maple bar, and a patron counters with something along the lines of “original, my ass,” Though it courts modern sensibilities, flattering audiences’ social awareness while simultaneously letting audiences off the hook (as the donut shop inevitably embraces Elvis), this exchange nevertheless emits a welcome sense of racial, classist danger, particularly when Elvis assumes a black man might be about to rob him, hinting at the various guns stashed on his own jewelry-bedecked person.

The film could use more scenes like this, which revel in the intoxicating craziness of existing as a legend, whether you’re sexy Elvis or square Nixon, particularly in a time in American society in which the citizens are growing to resent the privilege of its ruling elite. Johnson is generally more taken with comfy gags that celebrate these men’s ownership of pop culture, filtering them through a lens of unrevealing caricature. There are far too many scenes, for instance, of women going gaga over Elvis. While that worship was a part of the artist’s life, the redundant depiction of said worship serves as a kind of laugh track here, constantly and insecurely reminding us how much we should love this man. Tellingly, any character from a position to challenge either icon’s power—Pat Nixon, Priscilla Presley, and Colonel Tom Parker, to name the most conspicuously absent few—has been swept off the stage.

Unavoidably, these reservations will be countered with the reminder that the film is a comedy and not a “real” look at its subjects. But good comedy has something subtextual under its hood, so to speak, and Elvis & Nixon appears uncomfortable with the resonances that bubble up, especially Elvis’s conservative distrust of the “hippie” culture, which is clearly a manifestation of fear that he’s being abandoned by the generation following his own. Johnson acknowledges these contexts, but doesn’t allow them to breathe, keeping the film moving at a breakneck pace so as to proffer feel-good pep.

Which is a shame, because Shannon and Spacey are superb, balancing caricature, pathos, and portraiture with an astute grace that cumulatively eludes the film, which is altogether less than the sum of its parts. No one will mistake Shannon for Presley, and he doesn’t attempt a vocal impersonation (though he has a fey little laugh that suggests he’s merging Elvis with Michael Jackson, which is a striking concept, given their many parallels). Instead, Shannon suggests a ghost of a celebrity, bridging peak Elvis with the debauched Elvis he’d soon become. Shannon’s slimmer than Presley, and he often underlines this difference, allowing himself to be dwarfed by the King’s elaborate outfits, receding from them, offering a telling visual metaphor for the personal uncertainties that the script insists on spelling out anyway.

Spacey offers a comparatively more literal approximation of Nixon, but he’s poignantly aware of the irony inherent in the idea of the most powerful man in the world being besieged by little-man syndrome, fashioning it into rich, particularly verbal, comedy. (The film is nearly worth seeing just for the way Spacey has Nixon say “fuck,” as a temporary disruption of a man obsessed with decency as a means of control.) Elvis & Nixon finally cooks when Elvis and Nixon face off, partially because they aren’t the only performers in the room trying to top one another. So are Shannon and Spacey.