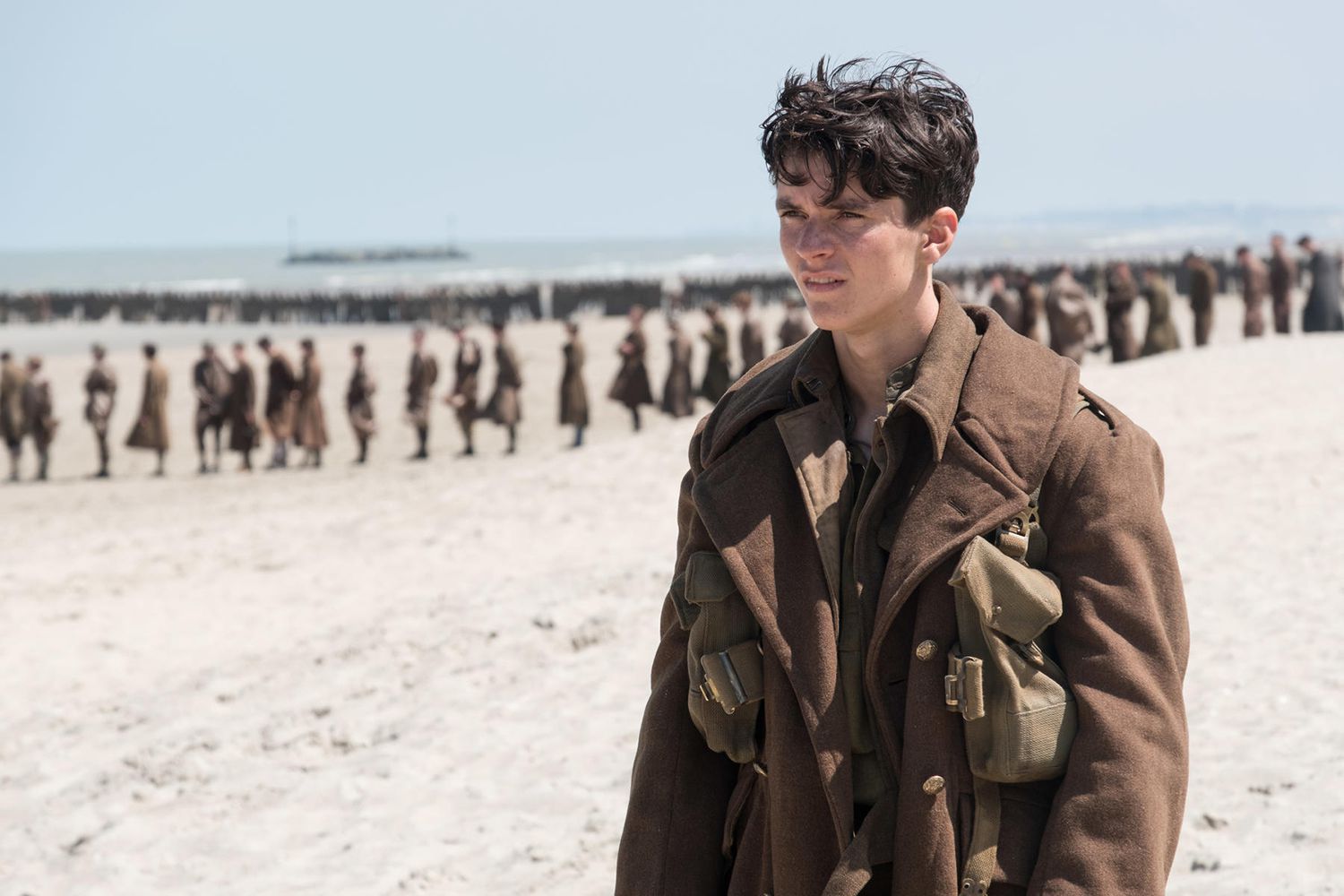 The metronomic precision of Christopher Nolan’s cinema, which often trades in crafty puzzles, is foregrounded in Dunkirk, with the sound of a ticking stopwatch embedded deeply into Hans Zimmer’s score. The incessant clacking of gears weaves in and out of the noise of breaking waves, German Stukas, and copious explosions, highlighting that the overriding fear facing the 400,000 Allied soldiers trapped on the northern coast of France during World War II is that of time slipping away as the Germans advance.

The overwhelming hopelessness of the Allies’ position is palpably felt in the film’s opening stretch, arguably the single greatest piece of filmmaking of Nolan’s career. With scarcely any dialogue, Dunkirk tracks one petrified soldier, Tommy (Fionn Whitehead), as he attempts to bypass the massive queues of soldiers on the titular beach to make his way onto one of few rescue ships. Pairing with an equally frightened private, Gibson (Aneurin Barnard), Tommy will do anything to sneak aboard one of the vessels. The two men communicate in silent gestures, constantly scanning their environment for escape routes, and their instinctive self-preservation is further propelled by the nightmarish shrieks of the divebombing Stukas, with the film’s sound mixed to such deafening levels that the planes start to feel apocalyptic.

The fluid editing of this sequence is concise and pointed, magnifying a sense of fear until it becomes unbearable, and the disaster that befalls every effort to get off the continent casts an invisible seal around the area, hauntingly rendering the low-tide flats of the beach as a purgatory. Unfortunately, the precise artistry that shapes this sequence is lost when Nolan broadens his scope to take in the simultaneous narratives involving a RAF pilot (Tom Hardy) defending ships against bombers and a civilian captain, Dawson (Mark Rylance), whose private boat is pressed into service as an evacuation vessel.

Instead of simply cross-cutting between the action of these three main figures, Dunkirk employs the kind of chronology-bending antics that epitomize Nolan’s Memento and Inception. First we jarringly leap from midday to pitch-black night, and soon we start seeing the same action from intersecting perspectives at different points in the film, though at times it’s hard to tell if it’s a replay or a different action entirely. Nolan’s long-running issues with spatial coherence in his action scenes explode here, with shots running into each other without transition and even seemingly linked images within the same plotlines featuring casual violations of the 180-degree rule and other continuity markers. The editing is meant to heighten the sense of bewilderment facing the Allies, but in the end the film’s confusing structure ensures that the any bewilderment is the audience’s own.

In devoting so much time to the dull, counterproductive construction of its action sequences, Dunkirk dispenses with nearly all other elements of drama. At first, this is to the film’s credit; the characters don’t waste time offering backstory or personality quirks, as they’re too focused on the immediacy of survival. In fact, most of the characters have names you can only glean from the credits, with the men becoming too preoccupied with their own skins to give a damn what the fellow next to them is called. After a time, however, the blurred lines between characters only exacerbate the editing’s cold, distancing effect. This inadvertently stunts the power of a few instances of interpersonal contact that do materialize, such as the traumatized soldier (Cillian Murphy) who’s picked up by Dawson from a torpedoed ship—a subplot that’s so quickly sidelined that it barely gathers emotional force.

Dunkirk’s muted color scheme further saps the story of its potential power. As ever, it’s odd that Nolan should be such a fervent champion for shooting on celluloid when so many of his images are monotonous and filmed in a color and lighting range that’s more typical of digital. In spite of this, Dunkirk does boast a few images on par with the strongest Nolan has ever filmed. These tend to be moments where the film’s oppressive sound design fades out, such as when the roar of a Spitfire engine goes silent as the plane glides over the sea, or when Dawson’s boat putters past a retreating destroyer completely filled with evacuees who stand stock-still on deck like pigeons, gazing at the boat with thousand-yard stares. That Nolan wrenches grace notes out of such fleeting bits of horror is a testament to his intermittent skills as an image-maker. As with his recent spate of blockbusters, however, his fussy ambition ultimately results in aesthetic and thematic sloppiness.