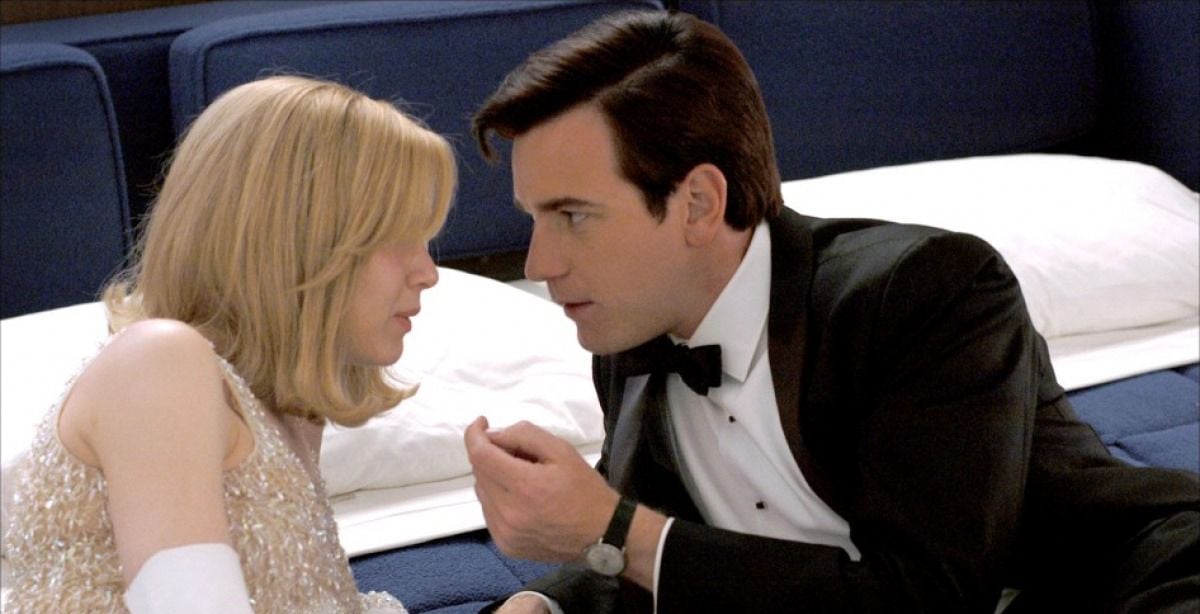 In Down with Love, Peyton Reed successfully recreates the pathology of a time period (Pillow Talk, Lover Come Back and Helen Gurley Brown’s Sex and the Single Girl are major points of reference) without ever really addressing it. Unlike Douglas Sirk’s melodramas, the Doris Day/Rock Hudson comedies of the ‘50s and ‘60s took themselves seriously, probably because they did see themselves as accurate reflections of the time period. These honest but disposable relics are not so much parodied by Reed as much as they’re carbon-copied for the sake of applauding just how good the filmmakers are at building a pastiche. From the gauche colors of the film’s interiors to the cutesy use of rear projection, Down with Love is a triumph of set design. Barbara Novak (Renée Zellweger) writes a bestselling book about women asserting their independence and subsequently spawns a feminist revolution. Hotshot Know magazine writer Catcher Block (Ewan McGregor) wants to destroy the woman warrior by wooing her and forcing her to defy her mantra. Every double entendre is rendered with near-deadening precision—“We’re bosom buddies” [zoom in on breasts]—and even an olive falling against the side of a martini glass is seemingly accompanied by the swell of an orchestra. The actual swipes at ‘50s-era repression (homosexuality, communist threats) are so few and far between that they’re mere afterthoughts to the parade of endless double-crossings that are perhaps meant to address the nature of feminism from the time period. But Down with Love doesn’t have a serious bone in its artificial body—it doesn’t penetrate [wink, wink] any myths as much as it wallows in them. By the time Zellweger delivers a last-act oh-my-God-is-she-still-talking? tirade, you may be tired of having had to watch the film’s proto-feminist bubble inflate and deflate repeatedly for 100 minutes without ever exploding.