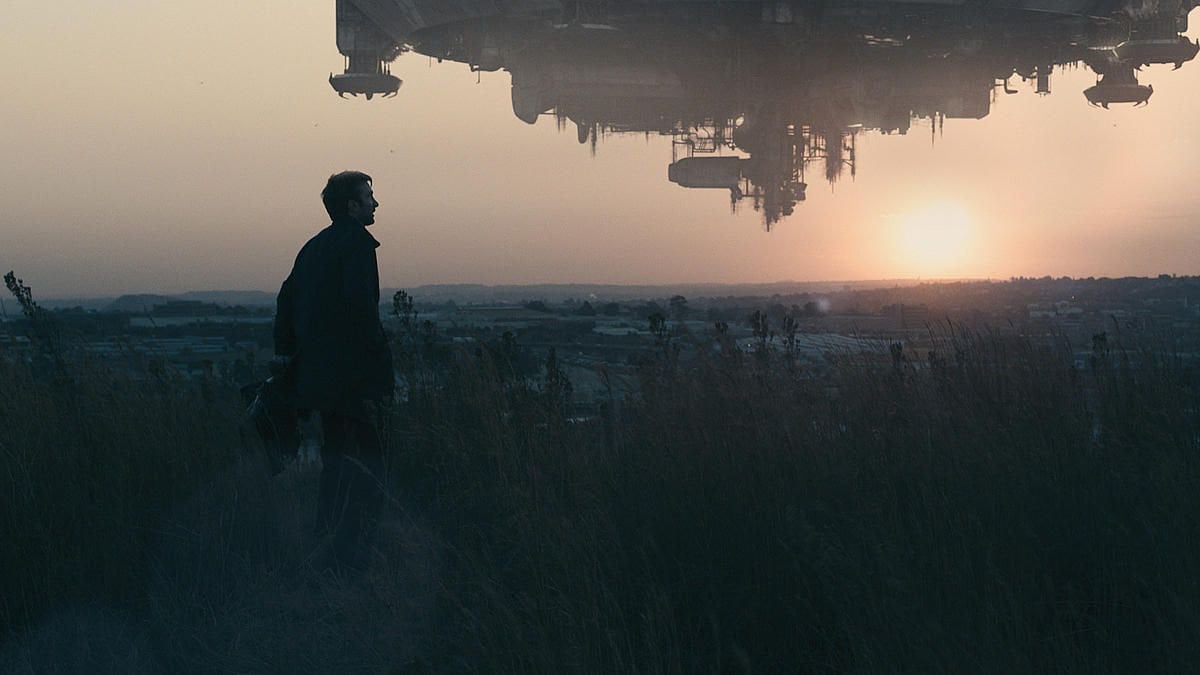 For District 9, it’s all about execution, as Neill Blomkamp’s sci-fi apartheid allegory is defined less by uniquely novel ideas than the shrewd synthesis of classic genre predecessors. In 1981, an enormous UFO mothership appeared mysteriously inert over Johannesburg, and its shellfishy alien inhabitants, derisively dubbed “Prawns,” have since been moved from their airborne craft to the titular heavily fortified slum, a shantytown controlled by voodoo-practicing Nigerian gangsters. As explained via an intro interview with dorky civil servant Wikus Van De Merwe (Sharlto Copley), Multi-National United (MNU) is undertaking an extraterrestrial relocation program aimed at moving the unwanted visitors—whose segregation is encapsulated by public “No Non-Humans Allowed” signs—far from Johannesburg’s center. These plans go awry, however, when Wikus is contaminated with a black alien fluid out in the field and begins transforming into a Prawn, thus initiating a flight from MNU (which secretly craves his newfound ability to use alien bio-weaponry) and an unlikely cross-race partnership with a Prawn named Christopher, much of which is conveyed by Blomkamp through pseudo-news reportage and nonfiction video. Or to put the above in more concise filmic terms, it’s a stew of V, City of God, The Office, Alien, and The Defiant Ones filtered through a Cloverfield-by-way-of-Verhoeven aesthetic.

Myriad obvious ancestors prevent District 9 from feeling as revolutionary as some (like producer Peter Jackson) have claimed, though there’s nonetheless vitality to Blomkamp’s expert implementation, at least during the first half, of his central Jim Crow-ish conceit. Concision, urgency, and realism all energize the director’s found-footage background primer on the Prawns’ arrival and their current circumstances, and immersive immediacy (albeit of a familiar variety) typifies his follow-the-schlub material involving Wikus, a Michael Scott-style goof whose cheeriness is grating and, as he attempts to coerce Prawns to consent to their transfer, is slowly peeled back to reveal bald intolerance. Blomkamp’s metaphor is upfront and blunt but he doesn’t underscore it more than is necessary, and his this-is-authentic aesthetic design—seamlessly blending its shrimp-like creatures into Soweto-esque shack settlement environs—is superbly wrought. Consequently, as Wikus mucks around the slums relishing his work, which also includes uncovering hidden weapons caches, District 9 creates an entrancingly plausible alternate reality, one in which the details are so sharp—the Prawns’ love of cat food, the callous anti-Prawn disdain articulated by man-on-street interviewees—that attention from nagging questions (how do humans understand the Prawns language? Why not just help them return home, as is their apparent desire? And couldn’t we have done without the stereotypical voodoo-practicing thugs?) is deftly diverted.

Or, at least, for a time. After firmly establishing his racial parable, Blomkamp becomes unsure of what to do with it, and the entire shebang slowly—if never disastrously—begins to break down. The film’s documentary guise crumbles as the director increasingly provides intimate vantage points on the aliens’ covert behavior and multiple camera perspectives on the proceedings, thus undermining the very fiction sold by the early going. Such POV inconsistency is gradually married to thematic instability as well, since once Wikus escapes his malevolent Weyland-Yutani-ish MNU captors and teams with Christopher in District 9, the film finds itself grasping for profound insight into intolerance, altruism, and corporate greed and warmongering, with Christopher’s paternal rapport with a young son laying most of the groundwork for Wikus’s predictable we’re-all-alike epiphany.

Still, even as the story morphs into a routine odd couple-on-the-run scenario, the filmmaker manages gangbuster thrills, highlighted by Wikus and Christopher’s headstrong assault on MNU’s downtown HQ and a finale battle whose kick-ass Mech tech is accompanied by evocative (though borderline-squishy) divine-deliverance imagery. Far more than with its “Who are the real monsters?” pontificating and humanistic yet unmoving depiction of the universal desire for freedom and home, it’s here, in the film’s exceptional CG-enhanced social-realist panoramas and its swift, muscular verité mayhem, that Blomkamp comes closest to crafting a vision all his own.