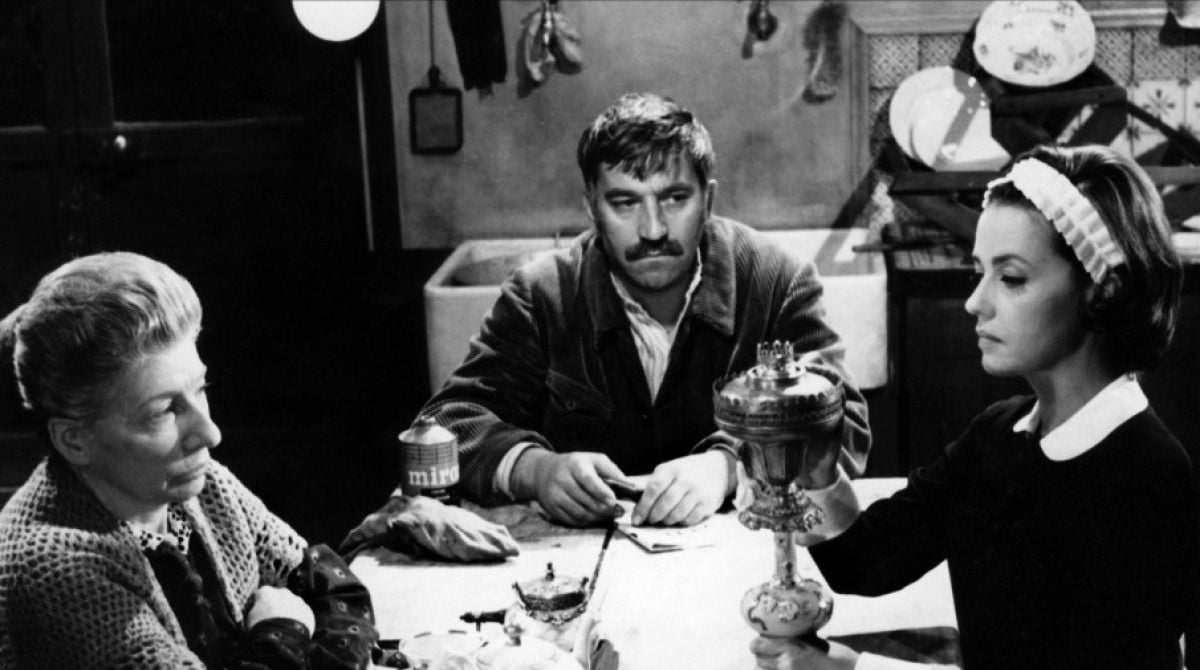 Luis Buñuel’s Diary of a Chambermaid was a crucial turning point in his career because it would officially usher in the French period of the director’s later years. In 1963, Buñuel met producer Serge Silberman in Spain and together they decided on an adaptation of Octave Mirbeau’s Jounral d’une femme de chamber, which Buñuel had read several times and Jean Renoir had previously directed less famously in 1946. Buñuel wanted to shoot the film in Mexico with the great Silvia Pinal in the lead but Silberman refused, wanting the director to make the film for him in France. At Cannes, Buñuel met screenwriter Jean-Claude Carrière, with whom he would work almost exclusively for the rest of his life, and with the help of Louis Malle, Buñuel met and subsequently cast the great Jeanne Moreau as the Parisian chambermaid who arrives at a country estate in provincial France and is overwhelmed by one sexual scandal after another.

It’s impossible to compare Renoir’s frisky version of Mirbeau’s novel with Buñuel’s considerably more acerbic one. Buñuel admired Renoir greatly but he refused to see his 1946 film so as to avoid any undue influence on his own production. In Renoir’s distinctly Hollywood version, the gold-digging Célestine played by Paulette Godard must still fend off the advances of various suitors, but instead of rewarding herself with bourgeois gold she gives a chest full of stolen booty to the film’s impoverished townsfolk. By film’s end, her greed has been seemingly quelled by the various misdeeds committed by the Lanlaire’s valet: Francis Lederer’s Joseph (Francis Lederer). In Buñuel’s more modern version (the story is transplanted from the late-19th century to the late 1920s), Joseph (Georges Géret) kills not the next-door neighbor but rapes and murders a young girl on the Monteil estate. As for Moreau’s Célestine, the chambermaid freely and passively indulges the whims of the film’s elite because she too aims for a position at the top of the bourgeois food chain.

As far as Buñuel’s dissections of bourgeois complacency went, Diary of a Chambermaid ranks pretty low. It’s neither as deliriously absurd as The Exterminating Angel or as masochistically metaphoric as L’Age d’Or. Shot in glorious black-and-white Franscope by cinematographer Roger Fellous, Diary of a Chambermaid is a more unsettling mood piece: a startling evocation of a kingdom on the brink of moral collapse. If Renoir’s version plays out like a happy-go-lucky fairy tale, Buñuel’s take is noticeably more Grimm. A miasmic mist perpetually encircles the Monteil estate, a visual motif Lucretia Martel may have borrowed for the similarly themed La Cienaga. And then there’s the innocent Claire jogging through the woods a la Little Red Riding Rood. Joseph turns to her as she runs off, muttering sinisterly, “Watch out for wolves.”

Buñuel once said, “Sexual perversion repulses me, but I can be attracted to it intellectually.” Diary of a Chambermaid features endless images of characters entertaining each other’s foot fetishes. Buñuel has acknowledged that this so-called fetish of his seems to transplant itself from his mind and into his films almost entirely subconsciously. If Buñuel refuses to ponder the irrational implications of these images in Diary of a Chambermaid, it’s probably because the film is Buñuel’s most realist expression of his life-long fixation with ribbing bourgeois orders. Monsieur Rabour’s obsession with Célestine’s feet is an outlet of some kind for his sexual frustration, but Buñuel seems more concerned with cause than effect here. When he cuts to Célestine and Joseph making love after Madame Monteil (Françoise Lugagne) is seen suffering in silence over not being able to please her husband (the great Michel Piccoli), the unusually sympathetic Buñuel sadly reveals the method behind the Madame’s madness.

In moving Mirbeau’s story to the 1920s, Buñuel and Carrière allowed for political unrest from the time period to run parallel to the story’s sexual perversions. The film ends with a political demonstration. Protesters shout: “Down with the Republic! Death to the Jews! Long live Chiappe!” Buñuel described Chiappe as the “bête noir of the Surrealists.” (This right-wing police prefect had suppressed the director’s wicked L’Age d’Or.) In many ways, the film’s unsettling mood anticipates the horrors of the Holocaust: a character is named Adolf; the film’s police commissioner wears a mustache not unlike the Nazi leader; and countless characters in the film are Jew haters. A priest (played by Carrière) is shocked that Madame’s husband wants to have sex twice a week, and in having the man whisked away by police along with the racist and alleged racist Joseph, Buñuel points both to the hypocritical madness of French nationalists and the Catholic Church that would turn a blind eye to the Holocaust.