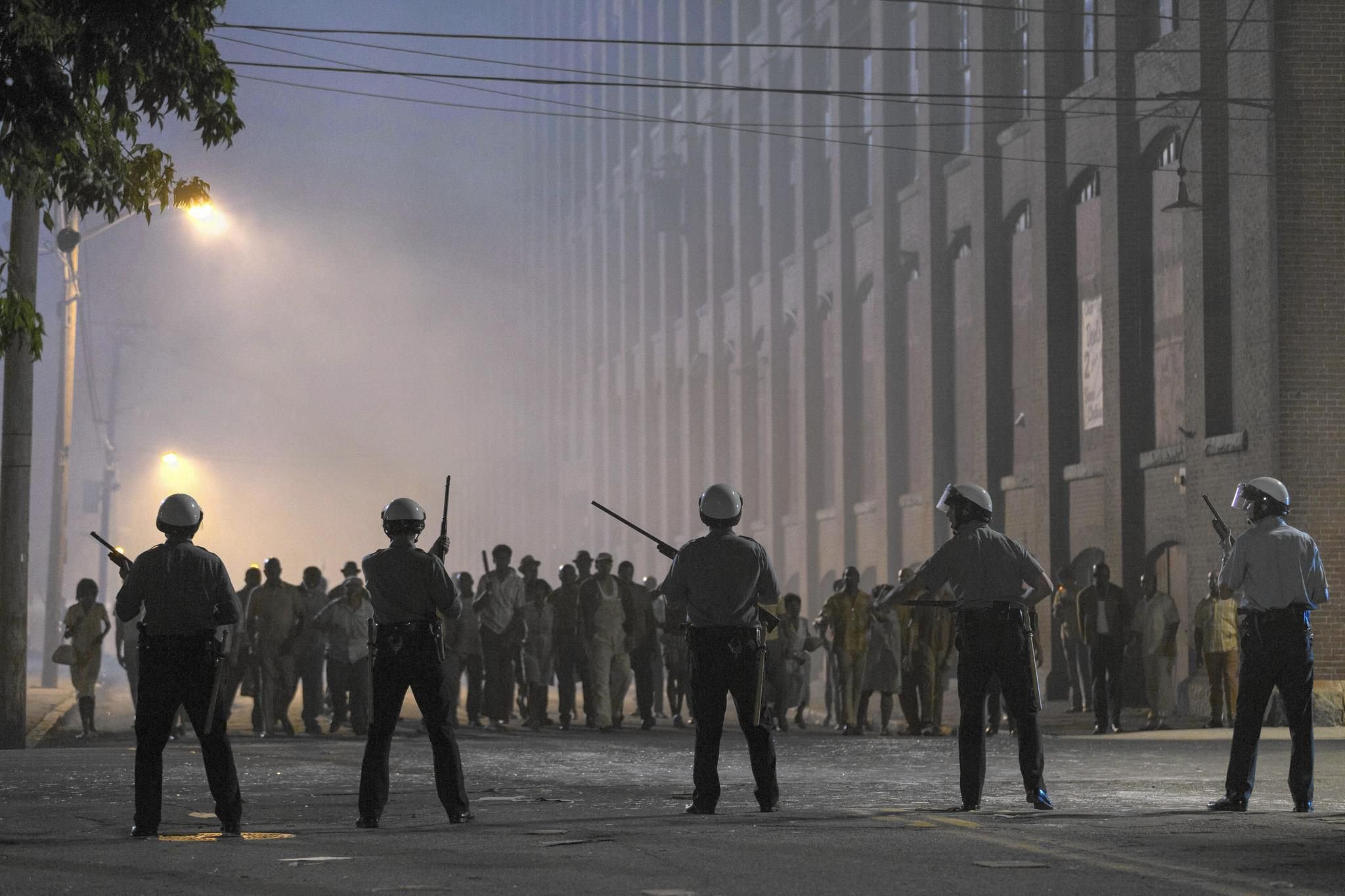 There’s a tonal shift about one-third of the way through Kathryn Bigelow’s Detroit, and as shocking and upsetting as everything that happens in the docudrama’s centerpiece sequence unquestionably is, it’s even more disturbing to contemplate the reasons the left turn feels so disruptive—and how that very difference informs how America digests and expels its systemic racial assaults. Based on an event that left multiple black men dead in a seedy motel amid the 1967 Detroit riots, the film opens with an animated sequence showing how the country’s urban cores were abandoned by the white middle class—presented with such a starkly grade-school veneer that you suspect Bigelow is condescending to specific portions of the audience. The film then launches quickly into street-level recreations of the events that touched off the fiercest uprising in a summer occupied by them.

Working again with her Hurt Locker cinematographer Barry Ackroyd, who never shies away from a smash zoom or a whip pan, Bigelow hyper-realistically, almost dispassionately, covers her ensemble’s actions in the manner of a somber disaster film, democratically elevating no one individual over anyone else. Throughout this sequence, which plays to Bigelow’s taste for the visceral, characters and audiences are apt to observe just how quickly this American urban center (which, at the time, was the nation’s fifth largest) turned into a war zone. More accurately, Bigelow seems to be saying that the war has always existed in post-Emancipation Proclamation America; we’ve subsequently been enduring the ensuing battles that keep cropping up, catching those like security guard Melvin Dismukes (John Boyega) and the Dramatics’ lead singer Larry Reed (Algee Smith) by surprise. A bar doesn’t get busted by paddy wagon-equipped cops only to be followed by a five-day conflagration without the prior existence of deeply entrenched oppositional forces. Or, more accurately, power-flexing belligerents behind badges.

That Detroit is a response to the Black Lives Matter/Blue Lives Matter battle currently playing out in 2017 is obvious even in this early sequence, and not merely in the sense that it observes the half-century gap between the events depicted in the film and the state of Trump’s America and finds very little to suggest things have changed. In cross-cutting between characters, Bigelow denies the audience a protagonist, but she and screenwriter Mark Boal most certainly supply an antagonist: Will Poulter’s Philip Krauss, a trigger-happy Detroit police officer who, within the first minute of the film, is shown shooting a black grocery looter in the back and leaving him to die. Played sweatily by the actor who was once slated to play Pennywise in the remake of Stephen King’s It—and who needs to have a serious talk with his agent lest his career follow the path of go-to racist villain player Bryce Dallas Howard—Krauss is the least subtle portrayal of white supremacy in power since James Woods slobbered over ever inch of scenery in Ghosts of Mississippi.

That his grinning evil is juxtaposed against the naturalism of virtually the rest of the ensemble tips Bigelow and Boal’s hands even before the film drops the “Day 1,” “Day 2” reportage and elevator-drops the audience into what is, by all justifiable standards, a torture-horror film. On a hot night during the height of the riots, police and National Guard troops descend on a motel after one patron shoots a toy gun out his window with righteously bellicose brio. From that innocent misunderstanding, a siege ensues, as Krauss, his partners on the force, and a wavering-but-willing guardsman terrorize about a dozen guests with racist obscenities, beatings, and psychological mind games.

Bigelow and Boal took a lot of heat from those who insisted that Zero Dark Thirty was nothing but a government-assisted PSA arguing on behalf of the intrinsic net-positive worth of extorting information via torture, and Detroit sees the pendulum swing like a wrecking ball in the opposite direction. If the first few days of the riots flash by in the blink of an eye during the film’s first act, the minutes of the Algiers Motel incident tick nauseatingly by with absolutely no hope for escape. Quite literally so, as two of the hostages are shown nearly making a break for it when the cops move to a different room, only to find white men with guns lurking at every potential escape route. Their return to the lineup in the front hallway is every bit as upsetting as The Texas Chainsaw Massacre’s Sally circling back to the hell house a second time.

Bigelow’s genre shift is itself the film’s most powerful political statement. The newsreel style of the early sequence keeps audiences engaged by scope, and skeptics at arm’s length in the knowledge that demonstrations in America circa 2017 “aren’t like that anymore, at least.” The debasement and cold-blooded murder that dominates the film after the shift doesn’t let a single viewer off the hook, and Bigelow almost seems to be arguing that it’s a direct byproduct of how easily this country processes (in other words, waves off) its own complicity in nurturing racism, indeed making it part of its national identity. A film like Detroit enters the current climate with an expectation that it adds to the conversation. The film, maybe to its credit despite the cultural dynamite it lights, argues that the conversation, centuries in, already speaks for itself, and anyone with any semblance of a soul already ought to see that.