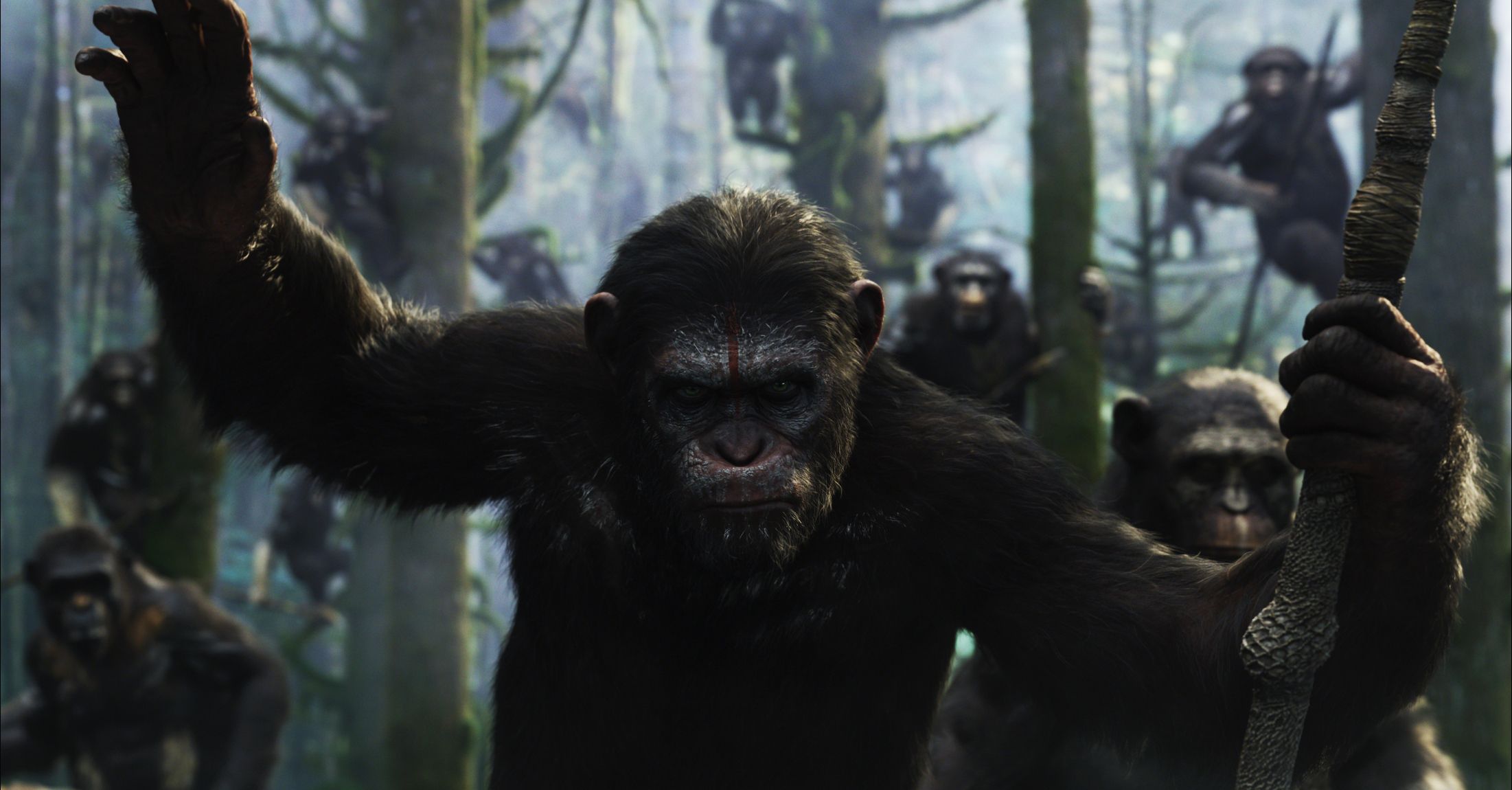 Rupert Wyatt’s graceful and complex Rise of the Planet of the Apes was hobbled, but not ruined, by a chowder-headed misalignment of audience sympathies. The tale of Caesar—a bright young chimpanzee subjected to freewheeling medical experimentation, who grows up to become an ape-separatist revolutionary—was packaged in a bland Hollywood wrapper, as a love story between a lab scientist and his assistant (played by James Franco and then-it girl Freida Pinto, respectively). Around the time the couple were fleeing a climactic wave of pissed-off primates ravaging its way across the Golden Gate Bridge, any viewer with half a brain had long since realized they were rooting for the apes the whole time.

Neither Franco nor Pinto are to be found in Matt Reeves’s sequel, Dawn of the Planet of the Apes, a film way less equivocal about putting the grimacing Caesar (portrayed, as before, by Andy Serkis in motion capture) at its front and center. Antihero or not, he’s the only character the new franchise has legitimately invested in, and that’s more than appropriate, as ape-to-human trust issues are what drives Rick Jaffa, Amanda Silver, and Mark Bomback’s screenplay. Rather than a balls-to-the-wall remake of 1972’s Conquest of the Planet of the Apes, the bulk of Dawn of the Planet of the Apes sees the film going out of its way to highlight the incremental rise in tensions between the two species, and in heroic nuance.

Years after the events depicted in Rise of the Planet of the Apes, Caesar and the liberated apes have developed a forested encampment outside of San Francisco; the so-called “Simian Flu” unleashed by Franco’s well-intentioned Alzheimer’s researcher has scrubbed out much of humanity, and shattered the country’s infrastructure. Armed to the teeth, human survivors huddle in a walled-off armory with sporadic power, led by Malcolm (Jason Clarke) and Dreyfus (Gary Oldman). The characters routinely allude to the riots and human-on-human bloodshed of the interceding years, and the same chaos promises to return once the power runs out, which is why Malcolm desperately needs to reactivate an electrical dam located on the cliffs near—you guessed it—the ape village.

When Carver (Kirk Acevedo), a member of his team, comes across two of Caesar’s foot soldiers in the woods, he panics and shoots one of them; nobody could be blamed for gasping at the abruptness of the gunfire, nor for anticipating a bloody retribution from Caesar. But instead, the chimp-king begrudgingly forgives him, allowing the humans access to the dam, provided they hand over their guns. Caesar confides in his head lieutenant, Koba (Toby Kebbell), that preserving the apes’ lives is priority one: The humans’ sad intrusion was more or less inevitable, and this wager is Caesar’s “one chance for peace” between humans and apes.

That Koba has other plans isn’t much of a spoiler, but the less explicated about the breathtaking final hour of Dawn of the Planet of the Apes, the better. This being a summer tent pole, many of the expected complaints still stick: Much of the dialogue is too average to be memorable yet too obvious to go unnoticed, and nearly every one of the film’s game-changing plot pivots takes conspicuous place at the worst time possible. (Koba, for instance, is seen breaking into the humans’ artillery range at the exact same time Malcolm’s crew hands over their rifles.) But Reeves counterbalances a solidly world-weary cast (including Keri Russell and Kodi Schmitt-McPhee, who, as Malcolm’s frail, indie-comic-reading son, could certainly have been more annoying) against some of the strongest mo-cap effects ever put on screen, allowing Kibbell and Serkis to breathe unmistakable gravity into both Koba’s vengeful sadism and Caesar’s sad-eyed realization that apes and humans have more in common than he’d like to admit.

The screenwriters manage to jerry-rig a complex and unnerving situation that could spiral out of control at any moment: This is a summer blockbuster contingent on grand bargains, tactical retreats, and a ferocious, inevitable shock-and-awe campaign. What the film serves up is neither the all-monkey havoc promised by the pent-up final minutes of Rise of the Planet of the Apes, nor is it a rebottling of the pseudo-intellectual charm of the original series. It’s both.

Review: Made in America