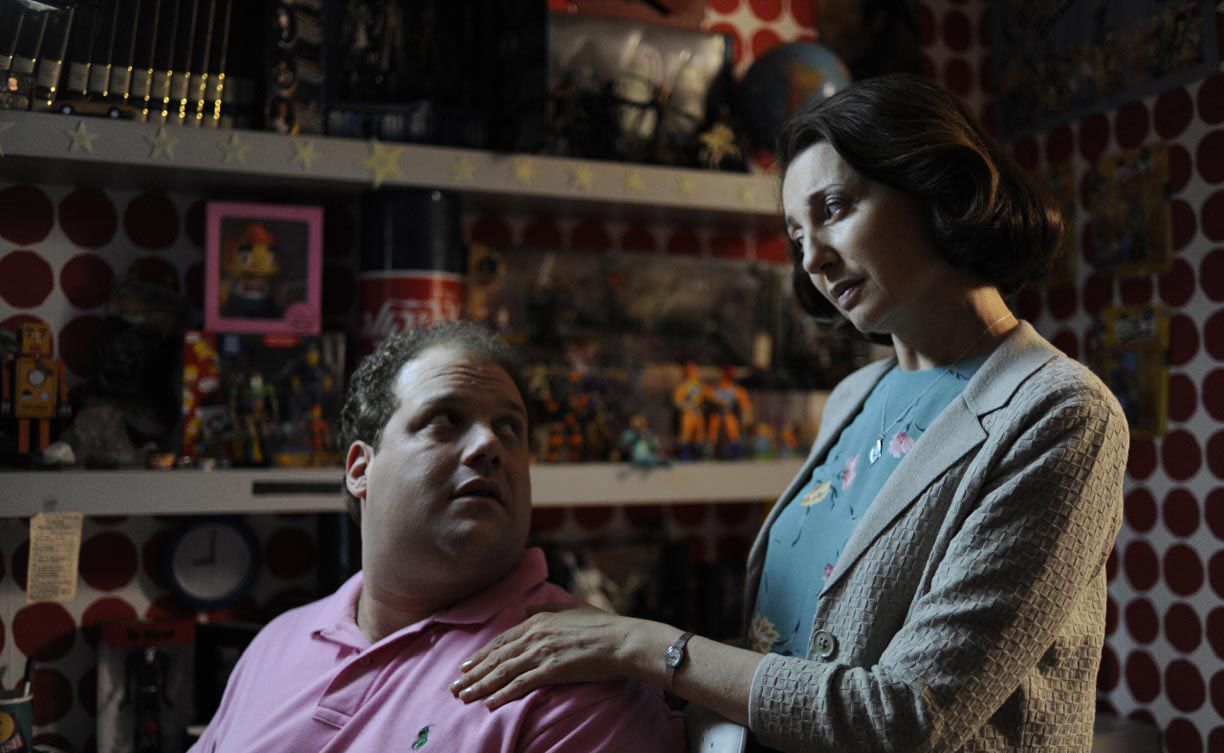 Part of what makes Todd Solondz’s films so despairing, so depressing, so frequently unwatchable, is that so few of his painfully choice-starved characters, victims really, ever learn how to fight back against their tormentors. After Storytelling was threatened with the NC-17 rating in 2001, the filmmaker put a red box over Selma Blair and Robert Wisdom’s copulating bodies in order to sneak the film past the censors—a ballsy post-post-production “fuck you” affixed to an otherwise passive-aggressive, cringingly defensive screed aimed at his critics, most naysayers of Happiness, his follow-up to his breakthrough Welcome to the Dollhouse. For his new film, Dark Horse, Solondz blurs out the name Toys “R” Us from two separate scenes, as the film’s finicky main character walks toward the store—and across a completely empty parking lot—in a pathetic attempt to get his money back for a not-mint-in-box toy. Yesterday, Solondz blocking the screen meant something, even if it was just his own petulance. Today, a blurred sign only signifies his capitulation to peer pressure.

After Life During Wartime, his most conceptually and formally intriguing and sensitive disquisition on his pet themes of human loneliness and isolation, Dark Horse feels like a regression. And yet it seems to regress to a state of absolute listlessness (misleadingly disco-fied opening titles notwithstanding) and unimaginativeness that even the vile Paldindromes can’t be accused of. Almost willfully gone is Solondz’s compulsion to shock, replaced by a more dull form of his typically blunt-force trauma. Case in point: It introduces us to Abe (Jordan Gelber) and Miranda (Selma Blair), strangers at some unknown couple’s wedding, in Grant Wood-ian shellshock intended perhaps as a frightful existentialist expression of their perceived unmarriageability. For Solondz, these are not unexpectedly pathetic stock types. He’s fat, collects Simpsons memorabilia, and lives at home with his parents (Mia Farrow and Christopher Walken). She, well, has hepatitis B. What’s strange is that that’s the extent of the characterizations.

IMDb suggests that Miranda was once known as Vi, meaning that this is what Blair’s salacious character from Storytelling has come to: a practically expressionless void of a woman who inexplicably agrees to a complete stranger’s marriage proposal minutes into an uncomfortable date even a legit crazy person would never have agreed to. But her name isn’t Vi, and so all we really know about her is exactly what Abe does: that she has “ironically” named her dog…Dog. Less of a cipher though no less lazily conceived, the performance art-averse Abe is an overgrown brat who, when he isn’t inanely articulating the meaning of the film’s title, is lashing out at his pushover, coiffed-like-a-clown mother, the estranged doctor brother who’s probably gay (assuming a Fire Island reference is meant as nuance), and not working for his father’s company, which may or may not be an atonal off-off-Broadway production of Office Space.

Even Solondz has said that his films aren’t for everyone, not even for those who actually like them. But Dark Horse is almost unrecognizable at times as a Solondz production. The filmmaker attempts something resembling the conceptual by setting up Abe’s father’s secretary (played by Donna Murphy) as a savior both in Abe’s real life, doing the work he puts off for his father at the office, and in fantasy by advising him against seeing Miranda. But are dreams, nightmares, or just mania to blame for this hypothetical production he casts her in, first as Jiminy Cricket, then as a cougar with eyes for her cute co-worker cousin (Zachary Booth)? But the concept is a nonstarter. There’s an accident, after which Abe slips into a slipstream where the real becomes indistinguishable from fantasy, and if the confusion felt as if it wasn’t ours but actually Abe’s, panicked hallucinations from a man coming to grips with his arrested development, then Dark Horse might have been something. Abe’s sojourn through these different layers of reality and fantasy registers merely as a series of ill-conceived sketches puttering lethargically into one another and toward a halfhearted conclusion. In short, performance non-art.