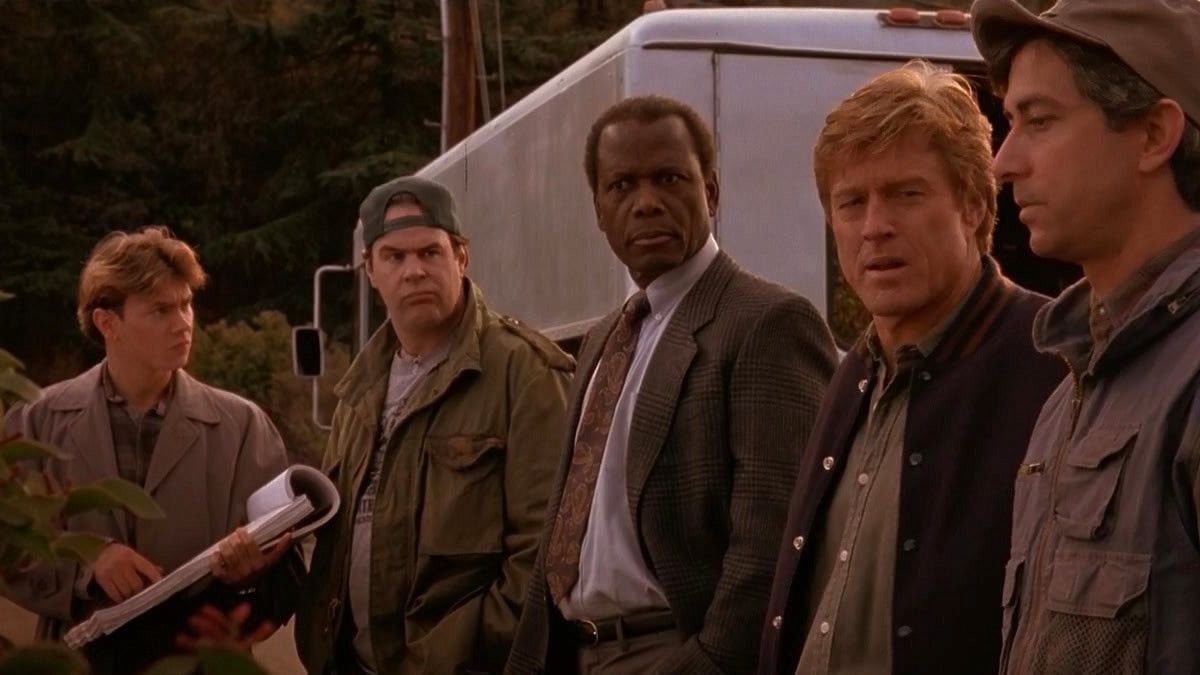 Phil Alden Robinson’s Sneakers is a comic-book movie where the superpowers employed are mental, not physical. Its plot and structure will be familiar to anyone who’s spent any time in the Marvel or DC Universes: A group of uniquely skilled folks from different backgrounds join forces to combat a more powerful, ominous enemy. There’s an overlong yet enjoyable climactic battle where each hero gets a moment to shine; the bad guys aren’t so much defeated as they’re temporarily contained; and the film’s ending hints that the heroes will continue to fight for their brand of justice. Sneakers even has Robert Redford, whom today’s youngsters will recognize from his work in the best of the Marvel movies, Captain America: The Winter Soldier.

It’s a surprise to discover a cerebral, 25-year-old film following the blueprint for today’s endless glut of superhero movies. It certainly operates on this level for the masses. But for those of us who’ve been in information technology as long as this film’s been in circulation, Sneakers also offers the chance to geek out on the ghosts of technologies past. The heroes must rely on PCs that are about as powerful as the nine button on a Samsung Galaxy’s keypad. They stare at VGA monitors with crude graphics denoting power grids, air-traffic-control radar, and bank transaction systems. And the most powerful force in this universe is a bulky box that looks suspiciously like a 1980s-era answering machine. This has a quaint, even nonsensical bent in 2017. But in 1992, this played as top-of-the-line techie catnip, especially considering that Sneakers is one of the rare films that has some computer-based proficiency.

That knowledge is courtesy of screenwriters Robinson, Lawrence Lasker, and Walter F. Parkes. Parkes and Lasker, as in their screenplay for 1983’s Wargames, are interested in pushing a brand of technological advancement as cautionary tale, crafting another plot that deals with software that’s too powerful for its own good. The aforementioned answering machine contains a decryption chip that’s the Rosetta Stone for any encrypted software, including banks and federal institutions. “Any government would kill to get their hands on it,” warns ex-C.I.A. agent Donald Crease (Sidney Poitier). And the United States and Russia appear to be first in line in that regard.

Crease is part of the motley crew of hackers headed by Martin Bishop (Redford). They’re former criminals who, in a note of realism, are hired by companies to test online security, and they’re played by an odd mix of actors who play perfectly to their strengths and persona. As Crease, Poitier is of course the grown-up in the room, tempering his gravitas and righteous anger with humor and charm. There’s also Mother (Dan Aykroyd), whose conspiracy theories are as detailed as Aykroyd’s backstories for his own screenplays; Whistler (David Strathairn), a charismatic, easygoing blind man with practically bionic ears; and Carl (River Phoenix), a smart-ass teenager who’s emotionally wise beyond his years. And then there’s Liz (Mary McDonnell), for whom the male actors hilariously do an on-screen double take in the same manner the audience does: “Hey, wait! There’s a girl in this movie?!”

Liz and Bishop have a history together, one she immediately puts the kibosh on when he tries to rekindle it. “We are not getting back together,” she warns, and the film pretty much abides by her wishes. She becomes part of the team when Bishop is blackmailed into stealing the decryption box from the soon-to-be-murdered, oversexed German professor who invented it. Despite saddling McDonnell with an amusing though retro plotline that involves romantically teasing a guy, Werner Brandes (a delightfully awkward Stephen Tobolowsky), in order to steal his security credentials, Sneakers still positions her on equal footing with her male cohorts. Her contributions are more than just the deployment of her feminine wiles.

That decryption box is a huge MacGuffin. Hell, so is the plot of Sneakers, which doesn’t stop it from being an enjoyable, suspenseful actioner that celebrates brains over brawn. The film’s success comes from the playful interactions of its cast, whose acting superpowers complement one another. Redford and Poitier, in particular, have the warm rapport of old friends charitably giving each other room in their scenes together. “You get to have all the fun,” Crease tells Bishop at one point, and it’s a pointed line that has historical context. Redford was never saddled with the studio-system baggage Poitier carried as a black actor, so his role choices could be more daring. And yet, Sneakers affords Poitier the raunchiest moment of his acting career, a voyeuristic line of dialogue that the actor delivers with delectable horniness.

Also good in a smaller role than his credit suggests is Ben Kingsley as the villainous Cosmo. Kingsley plays him as a low-key though nonetheless dangerous villain. Cosmo, a former colleague of Bishop’s whose vengeance is understandable and even a bit sad, brings a hippie-ish, liberal slant to the film. He and Bishop were once Robin Hood-like hackers who, back in the ‘60s, robbed from the rich to give to charitable organizations. When the feds raid their pad, Cosmo is arrested, but Bishop gets away. Now out of prison, he has designs on the decryption box. Cosmo’s ultimate plan is played for evil, but Sneakers hints that Bishop may carry out some of the defeated Cosmo’s plans of anti-capitalist anarchy anyway. This is a film that ends with the Republican National Committee being mysteriously bankrupted when a program wires all their money to the United Negro College Fund. Make of that what you will.