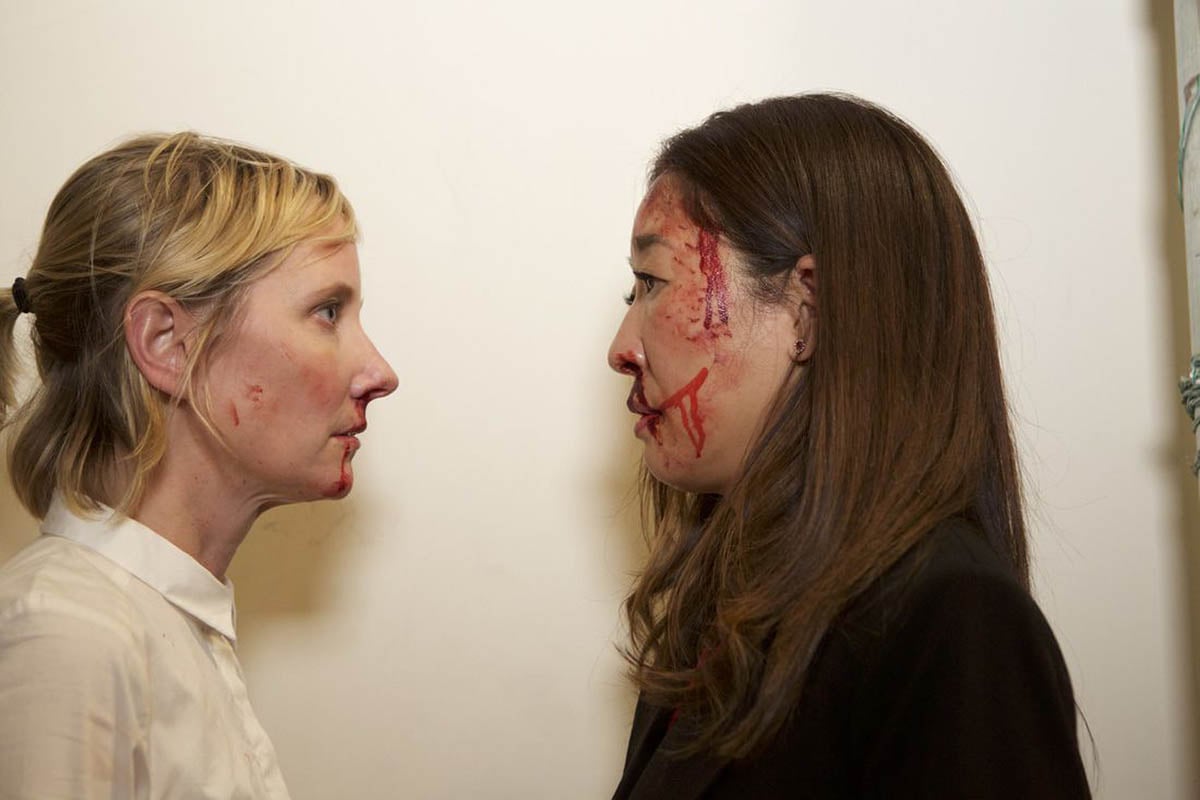 From the large-scale brutality of a fresh war in the Middle East to the small-scale feud between two former college friends turned bitter rivals, violence pervades every inch of Onur Tukel’s intriguing but off-balance satire Catfight, a film which offers the distinct pleasure of watching Anne Heche and Sandra Oh beat the living shit out of each other on three different occasions. Ashley (Heche), a struggling artist, and Veronica (Oh), a wealthy trophy wife, are abrasive, uncompromising women, and each time they cross paths, it ends in near-destruction for one of them. While the origin of their dispute remains undefined, their hatred for one another clearly runs deep.

At a swanky soiree put on by Veronica’s husband to celebrate a new military contract, Veronica’s condescension and Ashley’s wounded pride are palpable as they reminisce about the old days. Their mutual resentment soon erupts into a vicious fistfight that leaves Veronica in a coma, from which she wakes up two years later with no money or family, only a loyal maid, Donna (Myra Lucretia Taylor), to take care of her. Vengeance propels her to seek out Ashely, who found the war a boon for her violent, disturbing paintings. Now it’s Veronica’s turn to knock Ashley into a coma, from which the artist also wakes up penniless and without a partner (her girlfriend, played by Alicia Silvertone, has left her), and only an assistant, Sally (Ariel Kavoussi), to tend to her needs.

The near-perfect symmetry of Catfight’s plot belies its peculiar, rough-edged sensibility. Ashley and Veronica’s caustic misanthropy borders on alienating caricature, but the characters are grounded by Heche and Oh’s ruthlessly committed performances. Even at their most acidic, from Veronica brusquely discouraging her son’s artistic ambitions to Ashley screaming at Sally for using the wrong-colored address label, there’s a certain pathos to these women. Their insecurities have pushed them down paths they never really wanted to go, a dissatisfaction that manifests itself in their seething contempt for the world around them, which finds its natural expression in violence. Their fights are the film’s pièces de résistance—brutal, bloody brawls with extreme foley effects that make each punch sound like a shotgun blast.

Tukel attempts to connect Ashley and Veronica’s barbarity to the broader callousness of American life, but the satire is too blunt to really stick. The film takes place in an alternate present in which a fictional president has reinstated the draft and degraded the health care system even further into a cruel profit-making machine. A recurring gag has Craig Bierko as a late-night talk show host whose monologues consist of depressing updates on the world’s affairs followed by a call to “Bring out the fart machine!”—after which a flatulent, half-naked man comes out on stage to the audience’s delight.

That fart gag, which attempts to satirize our degraded political discourse by embodying it, is indicative of Catfight’s crudely sketched satire. While Tukel’s comically exaggerated America picks on some ripe targets, it doesn’t ring true as a world in which Veronica and Ashley could exist, as it’s too broad, too artificial, too cartoonish. By taking these prickly, complex women out of anything resembling the real world, Tukel ultimately cheapens them.