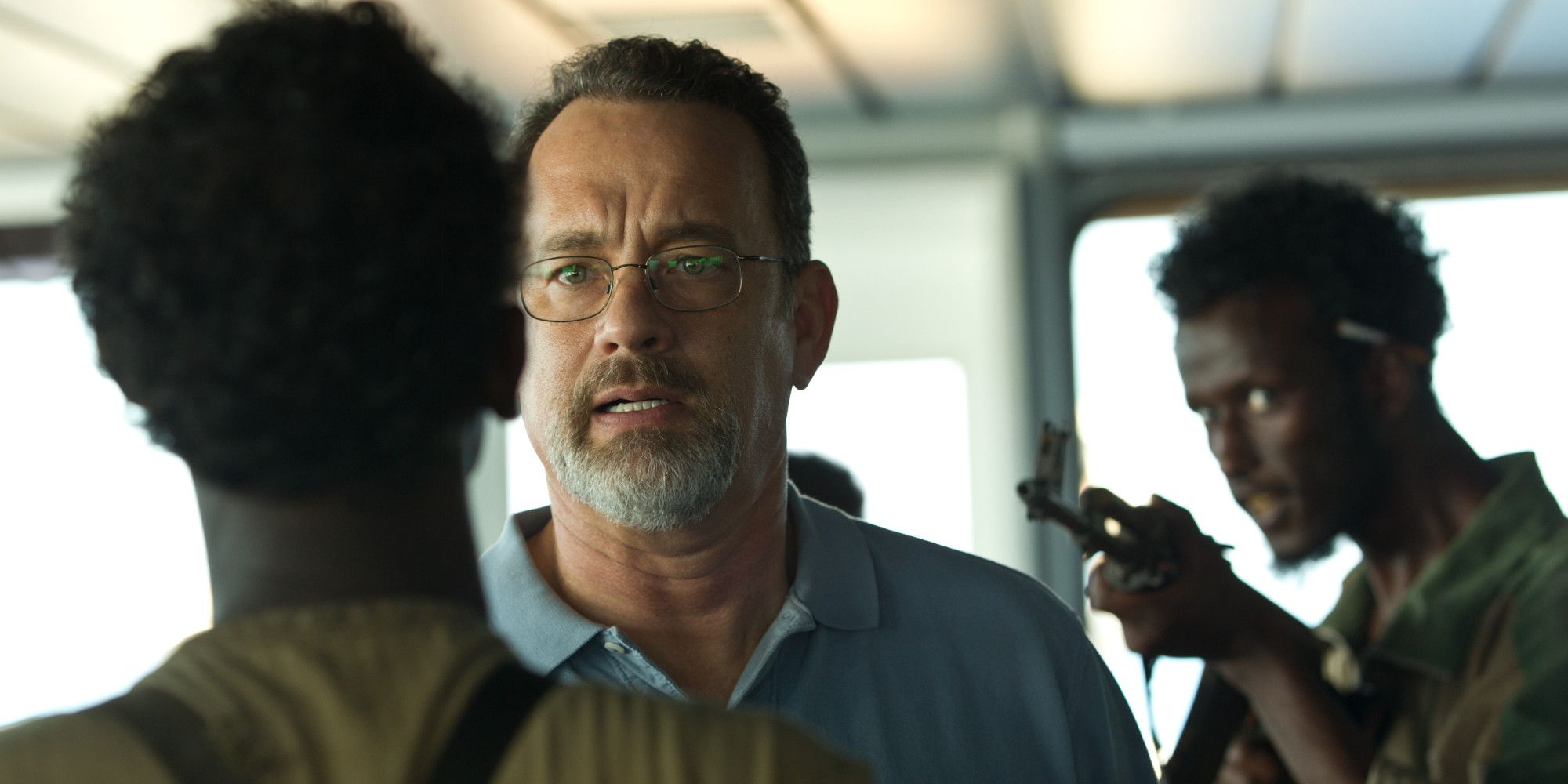 As a film about a band of ostensibly “evil” Somali pirates versus a sea captain played by Tom Hanks, the most all-American of all American white actors, Captain Phillips is asking for trouble when it comes to depictions of race, and odds are it’s bound to generate accusations of chest-beating, supremacist nationalism. Directed by Paul Greengrass, scripted by Billy Ray, and based on Richard Phillips’s autobiographical book, A Captain’s Duty, about the attempted ship-hijacking and kidnapping Phillips endured in 2009, the movie constantly walks a very delicate line in this regard.

On the eve of their attack on, and eventual seizing of, the Maersk Alabama, a towing ship Phillips (Hanks) and his crew are piloting through Somali waters on a routine delivery mission, the pirates are shown in a power struggle on one of their ramshackle skiff boats. It’s a scene that ends with one pirate bloodying another, suggesting these men will savagely eat their own in the name of their gangster-sanctioned plunderings. The scene that immediately follows sees Phillips leisurely shaving in his creature-comfort-filled cabin. Captain Phillips is essentially a feature-length compilation of first-world and third-world parallels, but misguided bits like this, and another in which Phillips offers the pirates fruit as if he’s trying to feed wild, gun-toting animals, off-puttingly detract from the film’s objective of thoughtful balance.

Yet, if anything, Captain Phillips works too hard to keep matters on an even, we’re-all-more-alike-than-different keel, which is just one part of its chief problem of forcefully conveying information and intent. Save an immersive scene in the Somalis’ coastal village, wherein Greengrass evokes both Bicycle Thieves and The Iliad in his rendering of desperate, jobless men who engage in a pirates’ lottery and then hit the seas like Spartans bound for Troy, the first act comes close to fully dashing one’s faith in the film, given all its overt and covert exposition. It ultimately proves valuable that Phillips and his wife, Andrea (Catherine Keener), discuss their college-grad son in the movie’s first exchange of lines, but the bumbling transparency of its function—to establish that times are tough out there for everyone post-2008—sets a tone of condescension that takes some time to let up. Captain Phillips begins slathering the info on thick, and not just with dialogue. Though right-hand man Shane (a painfully flat Michael Chernus) is more or less a viewer’s walking stick, doling out data about cargo and procedure, and obliging Phillips when he literally asks, “Walk me through the plan,” there’s also Greengrass’s fairly customary, visual hand-holding equivalents, like close-ups on emails containing piracy warnings and “all’s well” white lies for Andrea, and a coffee mug emblazoned with a photo of Phillips’s family.

But as it progresses, Captain Phillips really never stops getting better. The eye-roll inducer of unionized crew members griping about “not getting paid enough” to contend with pirates (an easy riff on the classic, “I didn’t sign up for this”), or the campy attempts at making Phillips gruffly authoritative (“They’re not here to fish!” he barks at a bureaucratic distress-call operator when phoning in the pirates’ approach), are soon offset by the mounting tension of one remaining pirate group’s hard-won boarding of the Maersk Alabama, and the immediate, magnetic formadibility of the group’s skeletal leader, Muse (Barkhad Abdi). Searching for money on a vessel that’s largely carrying food, the armed quartet doesn’t stay for long, and after a scuffle, they steal the ship’s lifeboat while dragging along Phillips, who proves his already-telegraphed nobleness by practically volunteering to join them.

For Greengrass, the film doesn’t show a grandness of technique on par with what he delivered in The Bourne Ultimatum, despite such searing shots as one that focuses on a tether eventually linking the lifeboat to a naval ship, and wows with its layered symbolism. What it does do is explicitly return him to what he thematically and logistically explored in United 93, which likewise aimed to reveal shades of heroism and terrorism, while diving headlong into the manic operations of ground control. It may not boast that film’s momentous topicality, but Captain Phillips is more accomplished on both of those fronts, and once its insistence on broadcasting the common bonds between Phillips and Muse settles into a smoother groove, there’s an emergence of nuances at which the movie’s inevitable naysayers should probably look closer. Muse, in particular, has a mysterious learned quality that’s thankfully never undone by offhand acknowledgements of it, and that affords him admirable agency, specifically in terms of having America’s number. Wholly aware of the ultimate American fear, Muse assures Phillips there’s “no Al-Qaeda here” when first boarding the Alabama, and later, when wanting to fend off an overhead Navy helicopter by pointing a pistol at Phillips, he asserts, “I know how to handle Americans,” keen to how strongly sentimentality drives the culture (an American’s closing-scene reiteration of Muse’s favored phrase, “Everything is going to be okay,” definitively proves him right).

Unlike comparable provocations in films as diverse as The Lone Ranger and Argo, which pretend to lampoon a dominant culture or institution only to hypocritically assert its dominance later, what unfurls in Captain Phillips strikes a much finer, if hardly all-encompassing, evenness. Within the lifeboat (soon an unbearable pressure-cooker), there are some underdeveloped, rich-countries-plunder-the-world-anyway exchanges between Phillips and his captors, and they have whiffs of those aforementioned, half-baked indictments. But when this film is in the throes of its climax, and finally, its shattering third act, there’s almost always something of greater complexity taking place, and what finally rescues Captain Phillips itself is Hanks. In the lifeboat-set stretch alone, the actor gives one of his finest performances ever, imbuing the film with a vital, system-shocking empathy, from the way he plays Phillips’s paternal scenes with the youngest pirate to the way he stunningly reacts to the resolution of the events. In just a few beautiful, heartbreaking moments, Hanks projects what Captain Phillips strives to throughout its entirety: understanding, universal pain and struggle, and colorblind humanity.