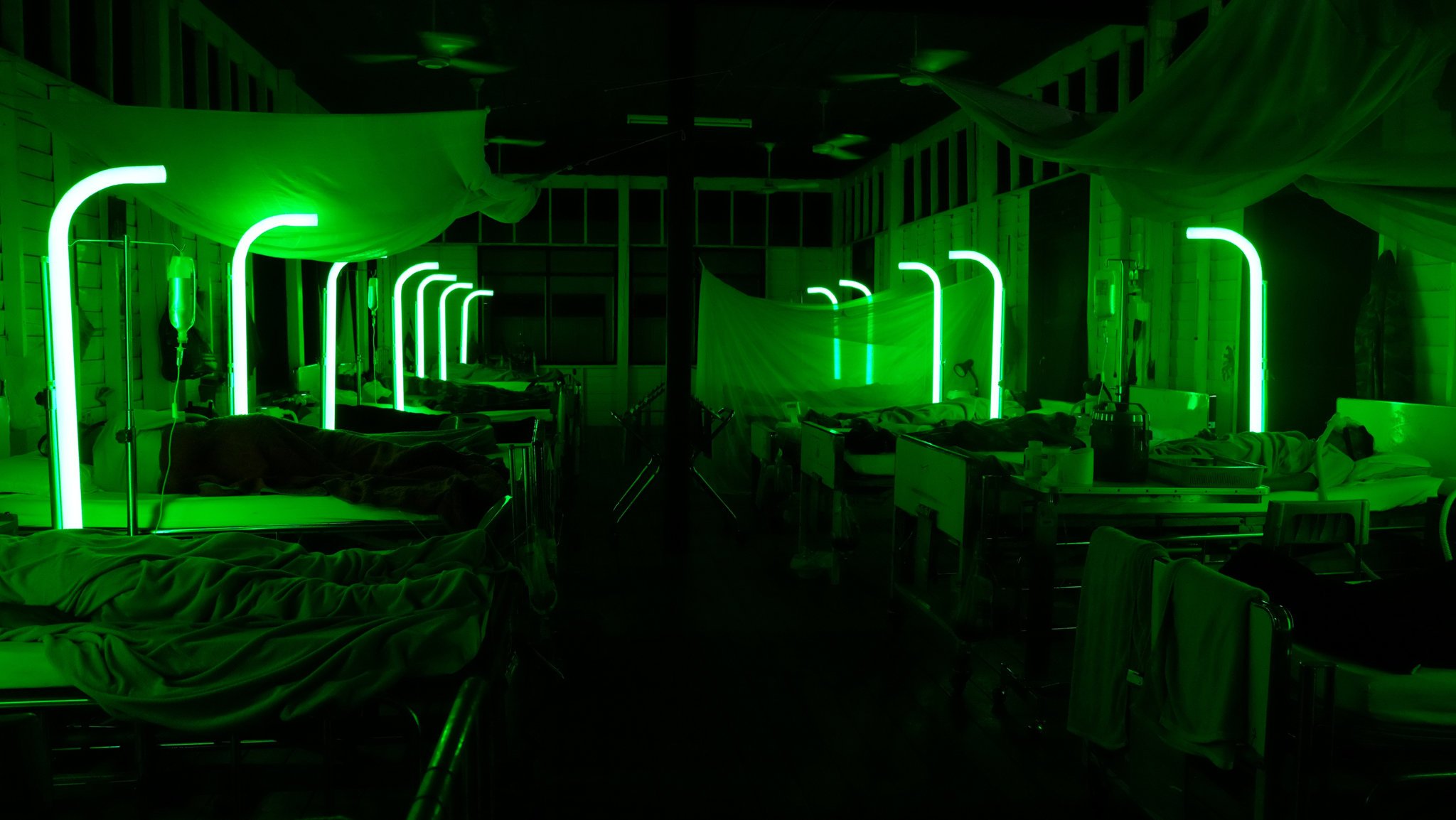 Apichatpong Weerasethakul’s quietly incandescent new feature, Cemetery of Splendor, is so serene, so perfectly meditative, that it puts the viewer in precisely the same hushed reverie to which its characters eventually submit, one’s fluttering eyes due not to tiredness, nor boredom, but rather some strange, inexplicable desire to join in with all the collective dreaming on screen. Moving away from the spatial and temporal bifurcations of much of his previous work, the film fixes its tender gaze on all the myriad things that one specific place has been, gently and often imperceptibly shifting between past and present, legend and modernity, wakefulness and dream.

The place in question is an improvised hospital in Khon Kaen, northeastern Thailand, which has been set up to house all the many soldiers struck down by some mysterious sleeping sickness. Jen (Jenjira Pongpas Widner), a middle-aged housewife with an American husband and one leg shorter than the other, turns up at the hospital to volunteer, recalling immediately that this former school is the one she herself used to attend. She’s quick to befriend Keng (Jarinpattra Rueangram), a medium and possible F.B.I. agent able to tap into what the slumbering inmates are dreaming, and swiftly makes one soldier, Itt (Banlop Lomnoi), into the son she never had.

Hospital life unfolds at a leisurely pace, as bodies are washed, new anti-snoring machines shipped over from America installed, and seminars on meditation given, the only interruptions being the chicken and its offspring that wander in from time to time and the sound of the digger ripping through the earth outside. Weerasethakul captures the languorous ebb and flow of life here in sustained, beautifully composed shots that are strung together based on rhythm and instinct rather than any overt narrative concerns: a colostomy bag slowly filling with urine, makeshift turbines splashing water across the nearby lake, dappled sunlight on a bed of leaves. Gentle humor also leavens these quiet routines again and again: the garrulous Jen will chat with everyone, her various conversations rendered in wry, unusually frequent dialogue that’s equally capable of namechecking Superman, past lives, and the number of calories in fried banana.

Yet other forces soon begin to impinge on the blissful calm. When Jen comes across two beautiful young women hawking clothes, they casually reveal themselves as centuries-old dead Laotian goddesses. They mention in passing that an ancient cemetery lies beneath the hospital, with the kings and warriors buried there draining the sleeping soldiers of their energy so that they can keep fighting their age-old wars. As Jen, Keng, and Itt grow closer, their thoughts, dreams, and eventually even bodies gradually converge, led by and suffused with all the rippling layers of reality this place contains. The neon lights by the soldiers’ beds soon cast their glow across the entire town, a sumptuous palace of past days is verbally conjured out of an overgrown garden, and, as the sun threatens to break through the clouds, an amoeba slowly inches its way across the image. The tone is one of sweet, aching melancholy, the realization that everything leaves an impression carrying both rapture and great sadness for the characters and the viewer alike.

Weerasethakul’s films have always been marked by their tenderness, unobtrusive rigor, and desire to splice the straightforward with the oblique, with Cemetery of Splendour perhaps the purest, most focused expression of these concerns. Yet, couched in perhaps the film’s strongest scene, he also seems to be making a typically indirect statement as to what film itself should be: a darkened auditorium, the audience standing up as one to gaze at the screen, an unstemmable flow of beautifully unfathomable images, cinema as the stuff dreams are made of.

The Cannes Film Festival runs from May 13—24.