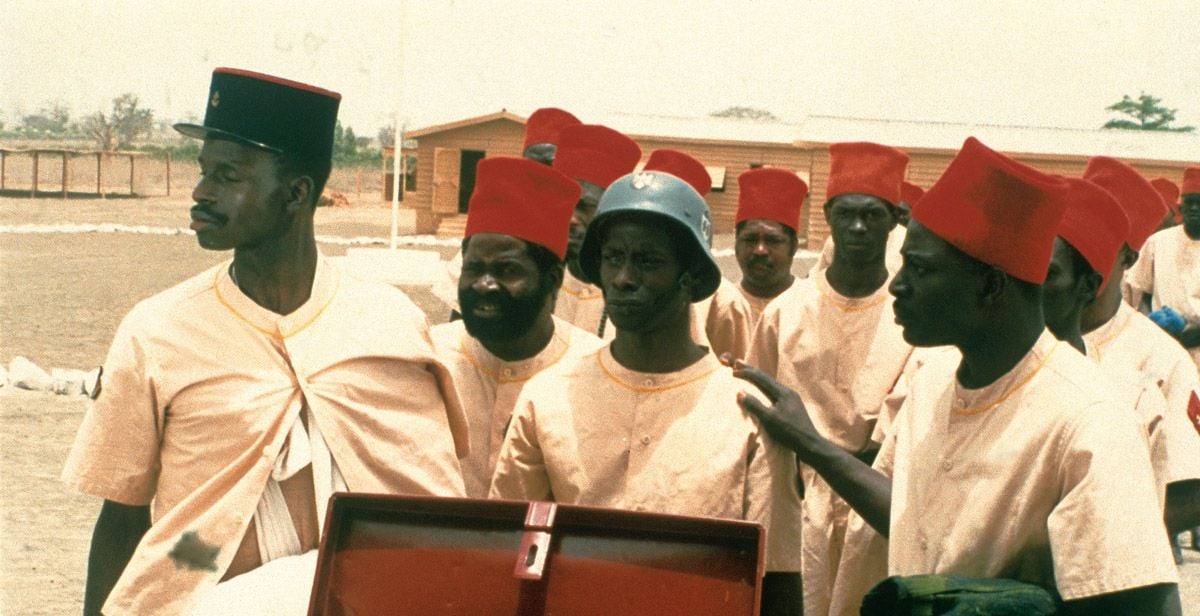 “We are African. We are men” is the rallying cry and epitaph of the heroes of Camp de Thiaroye, Ousmane Sembène’s historical drama of Senegalese infantry soldiers who in 1944, fresh from fighting for the French in Europe and North Africa, were massacred by their colonial masters after being denied just payment for their service. In the oeuvre of Sembène, the largest figure in the relatively short history of African filmmaking, it is perhaps the work that modulates his passions most evenly: the angry humor of Xala married to the tragic howl of Black Girl. (His credited collaborator on the writing and direction, Thierno Faty Sow, appears to have been thrust upon him by producers for amorphous reasons; the project’s origin, and likely its dominant vision, came from Sembène.)

The infantrymen who stop at the “transit camp” of Thiaroye before presumably returning to their native villages were cast (as was Sembène’s habit) largely with nonprofessionals, fortifying their function as a sort of collective protagonist. But the story’s fulcrum is Sergeant Diatta (Ibrahima Sane), a law student capable of impressing bigoted French officers with his taste for “great” (i.e., Western) music and literature, who is slowly revealed as not a go-along dupe but a worldly, quiet leader who reaches his point of rebellion. (His photo of the French wife and biracial daughter who wait for him in Paris earns him the enmity of both family—Diatta’s parents were killed in a Vichy atrocity at the war’s start—and military thugs who rifle through his room.) The sergeant’s beating and arrest at the hands of a black American MP, one of the film’s organic ironies, precipitates the infantry’s semi-farcical kidnapping of a white American grunt in retaliation. As Diatta grows increasingly and frankly sour at the trying conditions and protracted stay at Thiaroye, confiding in his unit’s sympathetic white CO, the imperial French brass replace the infantry’s smart American-supplied uniforms with traditionally retrograde garb, and then fatefully try to extort the troops’ francs for colonial currency at an extortionist’s rate.

Sembène never descends into the one-note shrillness of Spike Lee at his worst. Even potentially heavy-handed characters and situations are imbued with too much pain and terror to be trapped by symbolism. The mute infantryman Pays (Sijiri Bakaba) has been traumatized by his detention in a Nazi camp; fearfully running his hands along Thiaroye’s wire fence, a brother-in-arms naïvely assures him of their safety on African soil. Fearfully watchful from under his souvenir SS helmet, Pays issues a climactic warning to his brothers of a “German” attack that, along with a recurring harmonica-blown “Lili Marleen” on the soundtrack, asserts equivalence between fascists and the supremacist French executioners. Camp de Thiaroye is bookended by scenes of one Senegalese force deplaning, the other departing for war; only their destinations and mode of death at the hands of Europeans may differ.