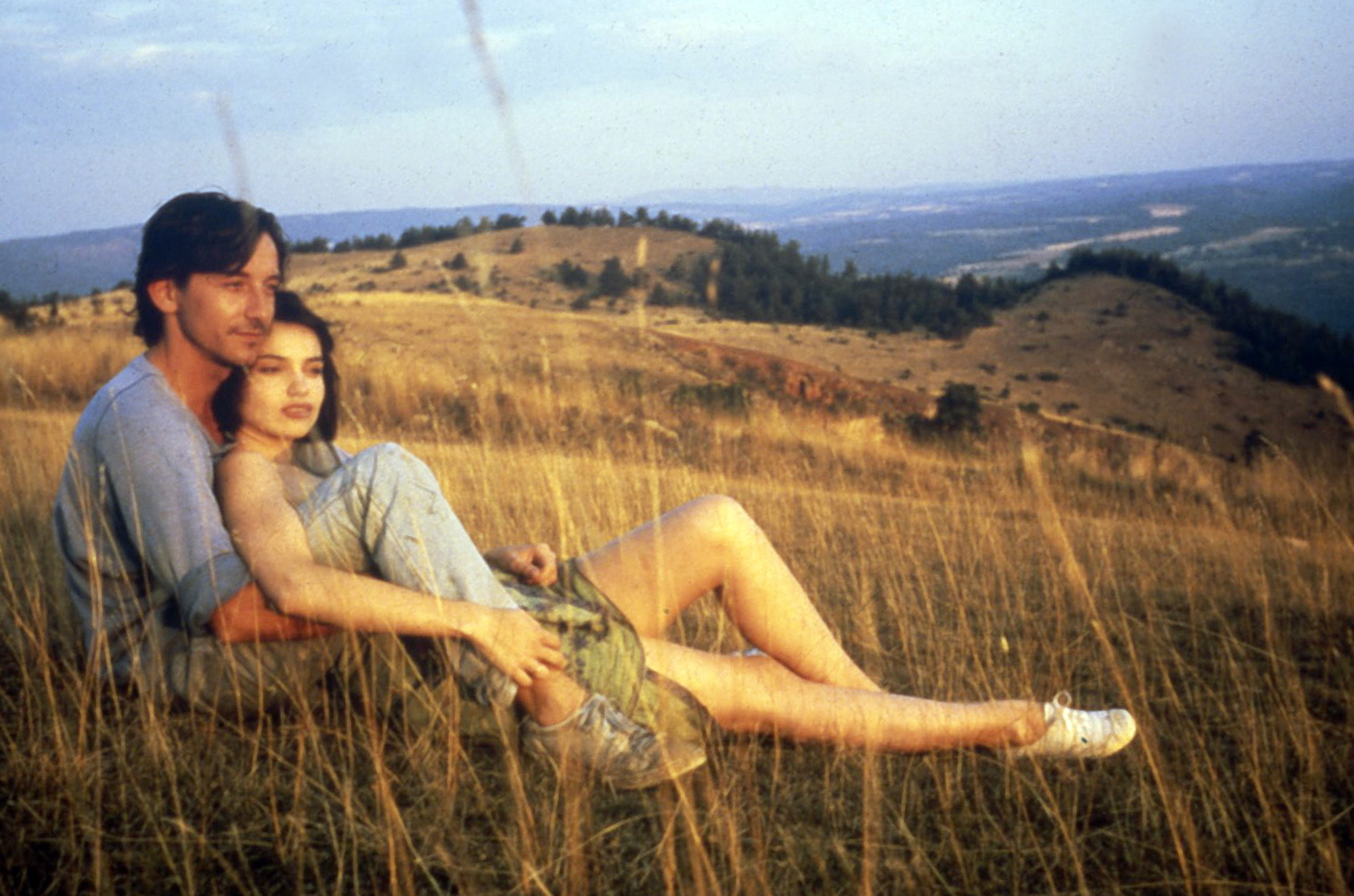 Today, the aesthetic divide between Jean-Jacques Beineix’s extroverted noir debut, Diva, and his bloated, lusty third film, Betty Blue, seems much less gaping, particularly for viewers intrepid enough to regard his sophomore effort, the faux-pulp kaleidoscope Moon in the Gutter, as a homely missing link. Diva is genre-obsessed, an unwieldy meditation on dystopian thriller tropes and clichés that distracts us from its overwritten plot with shorn scalps and sexy jump cuts. By contrast, Betty Blue is character-obsessed, an unwieldy meditation on the self-destructing nature of domestic relationships that distracts us from its lack of amorous insight with nipples, dicks, and the occasional fork stabbing. And while the latter film is also likely to be condemned as the most prodigal of Beineix’s progeny due to its lubricious audacity and turgid running time, the three-hour-plus director’s cut ironically reveals a far less indulgent vision than that of the originally imported 120-minute digest—or, for that matter, of Diva.

The emaciated storyline fixates relentlessly on an intensifying partnership between the eponymous Betty (Béatrice Dalle) and her blithely deadbeat lover, Zorg (Jean-Hugues Anglade). They start out as little more than bubbly fuck buddies, and the film opens with its most “viral” footage—a lengthy, unbroken dolly shot toward the couple ravenously humping to orgasm—in order to ham-fistedly introduce their dynamic. But Betty eventually shacks up with her booty call in his oleaginous bungalow and reveals the mercurial irascibility beneath her perpetually hot, bothered, and often nude lady parts. After discovering a mammoth manuscript Zorg penned in his youthful days as a prospective novelist, she proclaims her man a genius and assumes the role of literary bitch-agent.

Wanderlust then ensues, so the two lovers set fire to the chili bean-stained bungalow and motor out to the French countryside. The remainder of the duration is devoted to observing their apoplectic devotion to each others’ least healthy attributes: Betty desperately and violently seeks a publisher for Zorg’s tome while he would much rather mix shots of tequila with seltzer. And in harsh contrast to the semi-graphic fornication, Betty’s dramatic mood swings bristle tetchily against the most rudimentary of social environments (e.g. the workplace, where she cannot suffer difficult customers, and Zorg serves the bullish clients pizza topped with rescued scraps from the trash bin as retribution).

That the film was adapted from a novel is gawkily evident not only in the bare details of the above synopsis (what fiction authors don’t dream up Ariel-like harpies such as Betty, who treats Zorg’s abysmal output like gold and sends snarling death threats to the publishers who reject his work?), but also in the loose, polyrhythmic plot movements that incrementally propel the central duo toward tragedy. Expanded to its intended length, the movie feels not like a failed narrative hastily washed in luridness but a purposefully meandering allegory of artistic frustration, especially in light of Betty’s eventual infatuation with the apparent unlikelihood of pregnancy—which turns out to be her fatal flaw. Contrary to expectations, the additional sequences only further obfuscate Betty’s psychosis, which still seems an irritatingly unnecessary speed bump in the characters’ non-careers, as well as an ostentatious crazy-chick gun introduced in the first act so it can be fired off in the third.

The events that lead up to the denouement are still maddeningly flat: Despite the tight, kinetic editing technique on display, Zorg’s bank heist, pulled off in drag, is a cheesy joke when we least need it. And Betty’s predictable self-mauling and subsequent mercy-killing offer fairly substantial evidence for our uneasy reading of the character as a sexist guignol; before asphyxiating her in her hospital bed with a pillow in the spirit of Ken Kesey, Zorg claws at her misshapen, torpid breasts with misguided virility, as though to say that true devotion is arousal whether your significant other is utterly off her rocker or comatose. The lion’s share of the film, though, remains a vibrantly bipolar tribute to writerly travail, which can, indeed, often seem as hopeless as impregnating a potentially barren, absolutely abusive woman.

Beineix’s camera captures the couple’s symbolic struggles with perpetually effective angles and color schemes, and he adroitly realizes clever cinematic gestures that would melt in the hands of amateurs; a quiet, crepuscular scene where Betty and Zorg diegetically acknowledge Gabriel Yared’s ersatz-blues leitmotif on a pair of unsold pianos may be the film’s most subtle triumph. If only Beineix could have imagined an existence for his star-crossed protagonists beyond the source material (the question of whether successful maternity would have sobered Betty yelps for an impossible sequel), he may have managed a sultry masterpiece.

Comics Column Special—More Than Meets Few Eyes At All: The Legacy of the Transformers

Portrait of an Artist as Rambo: A Conversation with Flooding with Love for the Kid’s Zackary Oberzan