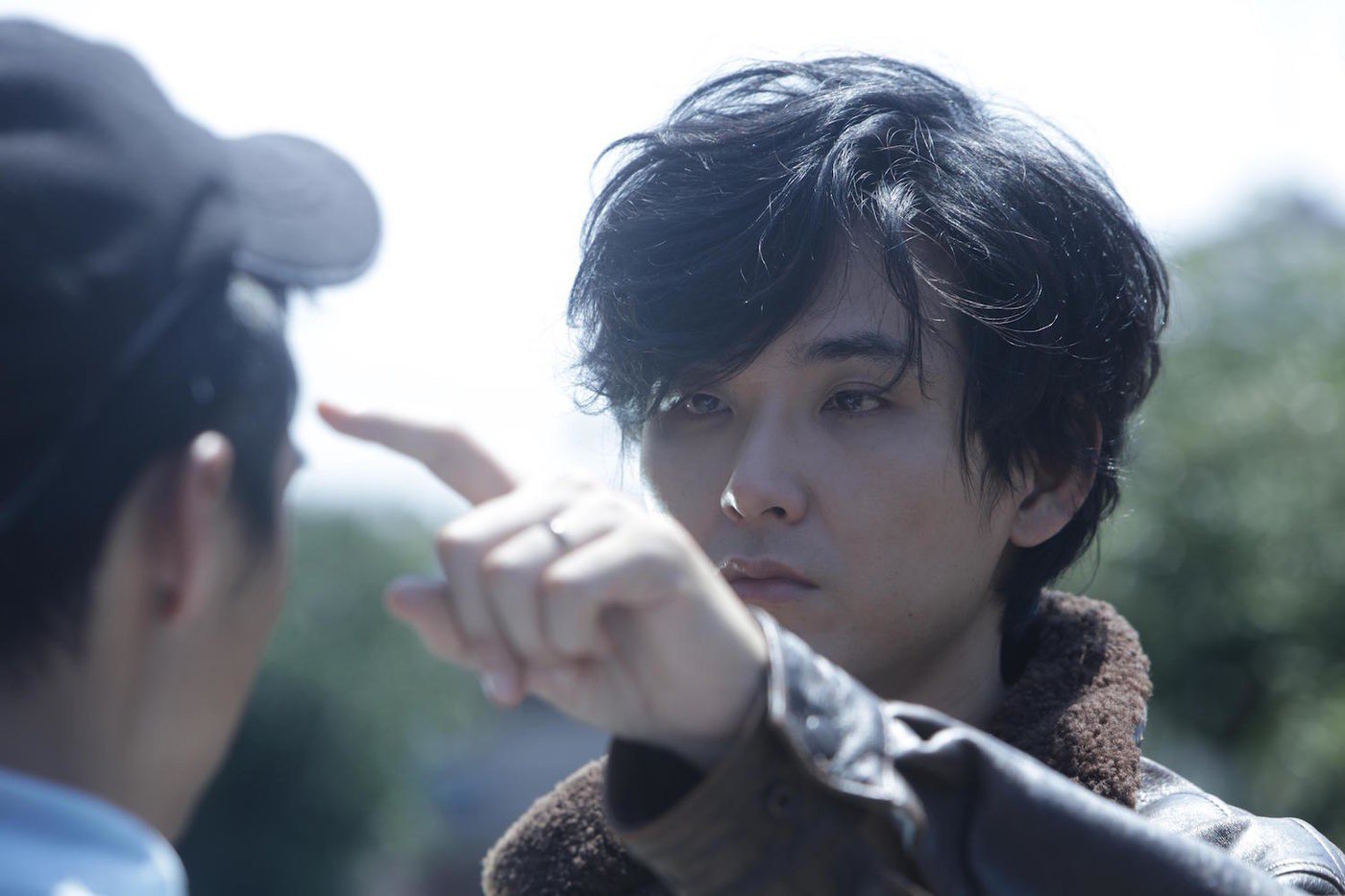 A flotilla of fish drifts across the screen. A hand, gigantic and Godlike, reaches down and scoops up one of the fish, putting it into a bowl. Outside, a young girl tries to run out of a house, but an unseen force sucks her back in. Stacks of bodies, mutilated and disemboweled, litter the floor as the fish lays still in a puddle of blood. The young girl (Tsunematsu Yuri), slathered in viscera, gazes at the bodies unperturbed. She tastes the blood.

The opening scene of Kurosawa Kiyoshi’s Before We Vanish suggests an enigmatic J-horror film, as does the subsequent image of the young girl plodding aimlessly down the middle of the street as a truck approaches from behind. When the truck slams its breaks and jackknifes, an oncoming car crashes into it and sets into motion a generic action movie inferno, the girl continuing to walk toward the camera with something resembling a smile on her face and Hayashi Yusuke’s dementedly playful, Danny Elfman-like score veering into the absurd with its sense of self-aware mirth.

An ontological curiosity courses through Kurosawa’s films, which are saturated with anxiety and dread—of corporeal frailty, of technology usurping and rewriting human value, of the disconnect between brain and body. Kurosawa is a modern existentialist, and the tragic flaw of his characters is the obliviousness with which they orchestrate their own downfalls. In the overcrowded world of his films, humans become, over time, unnecessary; their cursory lives are outlasted by the cellphones and computers and satellites they’ve created, and on which they grow increasingly reliant.

In Pulse, an apocalypse prevails as people plummet from buildings and degrade like old photos. In Tokyo Sonata, people bring about their own demise, without aid or interference from the supernatural, but through the capitalist system they’ve devised, which leaves the unemployed worthless and hopeless and families in shambles. His characters exist in the quietus of modernity. A sense of the end looms. With Before We Vanish, an alien-invasion film that sends up Kurosawa’s auteurist obsessions while addressing some of the criticisms leveled against him, the filmmaker seems to have finally found hope. He’s finally having some fun at the dawn of the apocalypse.

The little girl who slaughters a family is one of three aliens sent to Earth to steal “concepts” from humans, so that the aliens can pool their findings, invade our planet, and wipe out humanity. She’s the sadistic one. Shinji (Matsuda Ryûhei), whose marriage to Narumi (Nagasawa Masami) is in the doldrums, is the second alien. Suggesting a cross between Kyle MacLachlan’s Dougie Jones and Jeff Bridges’s Starman, he struggles to adjust, speaks as if words are foreign to him (because, well, they are). The nature of relationships, which Kurosawa treats with utter sincerity, provides the emotional core of Before We Vanish. The third alien, a young boy (Takasugi Mahiro), a schemer who seems to have adjusted to Earth the quickest, picks a desperate journalist named Amano (Hasegawa Hiroki) to be his “guide.”

This is Kurosawa’s funniest work in years (Takusagi and Hasegawa establish a rapport of sharp timing and insouciant banter), but he’s still focusing on his usual themes. His films inhabit genres the way the aliens inhabit human bodies, using the form of horror, of thriller, to reconnoiter the shadowy terrain of modern life. They’re fraught with philosophical uncertainty. Shot with a looseness that belies Kurosawa’s usual rigor, Before We Vanish elicits a sense of comfort—the silliness of a film about putzy pod people luring you into a sense of complacency that makes the emotional impact hit as hard as that car that crashes into the truck. Kurosawa’s films tend to unfurl at a stilted pace, with dreamy and deliberate torpor, but this one has a manic quality.

Over the last decade, Kurosawa’s films have gotten prettier, smoother, the sordid textures of basements and hollowed-out structures captured on film replaced by an unwrinkled world of glossy buildings and gleaming computer screens. When he first experimented with digital photography, in Bright Future, he plumbed derelict industrial landscapes, steel and concrete, all of the oneiric ugliness a sort of predecessor to David Lynch’s Inland Empire. In recent years, Kurosawa’s digital photography has exuded a slick, less tactile feeling. One almost gets the sense that the worlds of his more recent films, not far removed from the grayscale modernist milieu of Jacques Tati’s Playtime, aren’t inhabited by flesh-and-blood people but wireless signals and cubicle drones. Locations feel intimately familiar yet vividly disorienting, human-made structures purged of humans.

The thrillers for which Kurosawa is known are clinical, shot with long, detached takes, still and distant. He has an obsession, like Yasujirō Ozu, with framing characters within doorways, pinning them between things, smothering them. There’s a cruel humor in this detachment and geometrical precision (think of Cure and its elegantly staged deaths, a bit of Buster Keaton conflated with John Carpenter). But the rigor of Cure, Pulse, and Bright Future isn’t just formal. It’s also philosophical, as he depicts cruel, unflinching worlds, manipulative characters, and the violence throughout has an orchestrated, visceral quality. A gunshot, a body swaying from a noose or flung through a window—these deaths feel precise, calibrated.

By contrast, the violence in Before We Vanish feels more casual and lacks weight. The only times that characters look straight into the camera, in that Jonathan Demme way (an unnerving move that Kurosawa has used before), are when the alien Shinji first meets his “wife,” and when the former talks to a priest about the concept of love. Kurosawa, normally as aloof and severe as Stanley Kubrick, is dealing with emotions, with the perseverance of love, and the more casual tone—the rhythmic raillery between the alien and the journalist—makes this the closest thing to a hangout film that he’s made. Because the aliens are learning about human emotions, the viewer knows that love, that most nebulous of feelings, will be the climactic discovery, and that inevitable scene, tender but not quite saccharine, brings to mind the mawkish Interstellar (also helmed by a filmmaker not known for his sentimentality).

Kurosawa, though, has an awareness of his own calculative habits. For the aliens, and for Amano, death feels inexorable, not worth worrying over. A little girl is hit by car, her CG body rolling over the spiderwebbed windshield and landing splayed on the asphalt. She isn’t mourned. An airplane assault, shot in long, fluid takes, has no sense of danger, and almost feels like parody of action. Kurosawa orchestrates this elaborate action scene that amounts to a brief act of physical comedy, and, knowing the assiduous nature of his films (even the unfairly maligned Daguerreotype has a relentless purpose, despite its languor), you have to wonder why he feels so lax here.

There is, enmeshed with the aliens and ghosts of Kurosawa’s films, an aching humanity. He poses questions in the form of visual repetitions, excavates ideas from the staid mood of a haunted ethos. If nothing here lodges itself like the best moments from his earlier films, Before We Vanish still lingers. On its own, this is a fun, broadly satirical alien-invasion film, more self-aware than self-serious, but its beauty, its poignancy, comes from its relationship to Kurosawa’s other work. In his filmography, you find the intellectual musings of a man who’s spent more than two decades wrestling with free will and the roles of humans and technology. Here, at the denouement of civilization, love, as corny as it sounds, finally wins. And Kurosawa pulls it off, because his curious optimism feels genuine and infectious.

Review: Lover for a Day