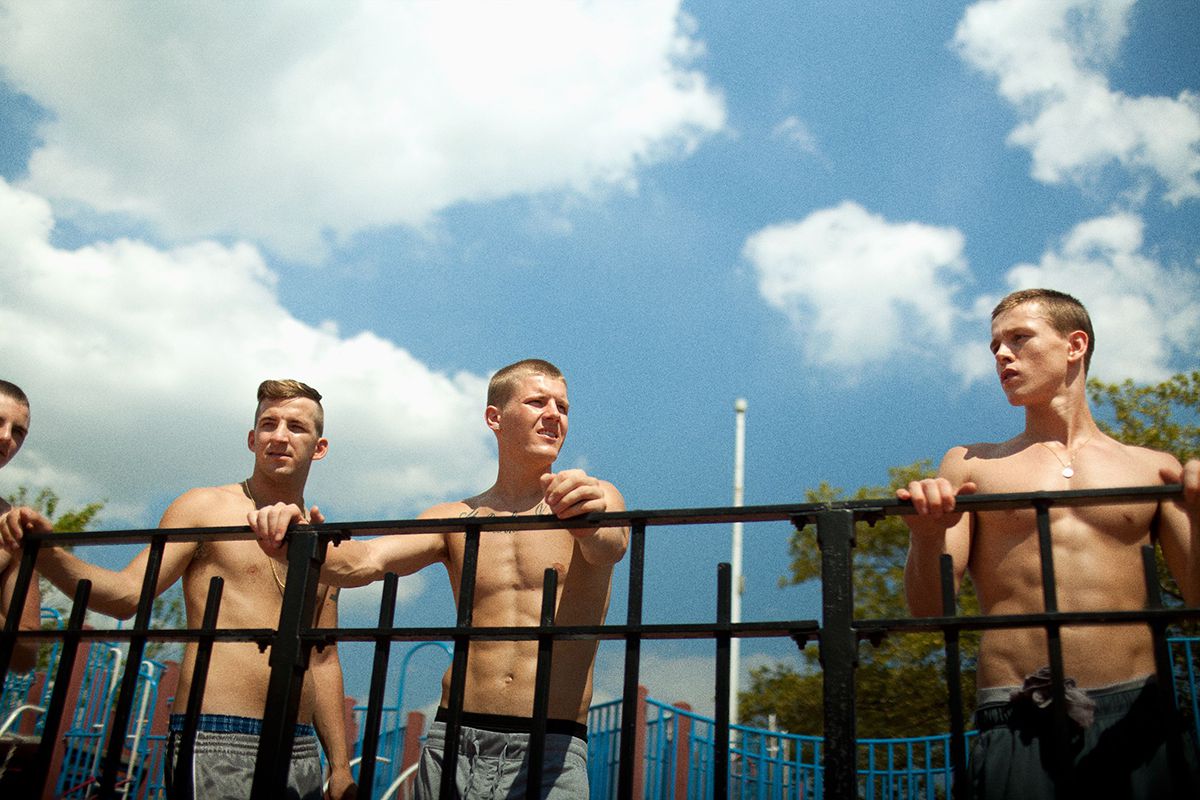 With Beach Rats, writer-director Eliza Hittman continues to chronicle roughly the same type of burgeoning teenage sexuality she captured so frankly and unsentimentally in her debut feature, 2014’s It Felt Like Love. What’s deflating about this film is its generally more familiar approach to its subject. It Felt Like Love benefitted from its bold portrayal of the female gaze, as Hittman was less interested in character study than the theoretical idea of a character, someone who simulates sexual desire for the sake of maintaining a social expectation. Beach Rats, though, falls much less excitingly into the stereotypical narrative of a closeted gay youth.

Frankie (Harris Dickinson) is a young man who lives in the outer reaches of Brooklyn and spends his summer at Coney Island with a group of skin-headed straight friends; who tries dating and sleeping with a girl his mother likes; and who sneaks off in the night for discreet rendezvouses with older men, whom he meets through the Internet cruising hub Brooklyn Boys. One curious trick finally asks late in the film, “Why older men?” To which he gets the expected response: “Because they don’t know the people I know.”

Beach Rats is most compelling when it puts a self-aware focus on Dickinson’s sculpted male figure: From the very first frame, Frankie engages in self-objectification, as the strobing flash of an iPhone camera reflects off his bathroom mirror in an image that encapsulates both the sensual appeal of the film and the intent of its aesthetic overall. Like Claire Denis, Hittman has positioned herself as an auteur of the skin—and one who explores characters who share in her self-aware fetishism. Frankie’s gaze, and by extension Hittman’s, glances with as much fascination at his entourage’s smooth, young skin as it does the aged and weathered napes and hands of his much older hookups, and even the infirmed skin of his cancer-ridden father.

Skin is evocative of a simultaneous strength and vulnerability in Beach Rats. It’s a camouflage, as Frankie’s fit, masculine frame helps him to blend in undetected with the straight, stoical dudes with whom he lumbers down the boardwalk. But it’s also an inescapable truth, as when a touch leads Frankie to instinctively reject the sexual advances of a young woman. In this sense, the film is just as accomplished a work of filmmaking as Hittman’s debut—or rather, even more so, since cinematographer Hélène Louvart’s 16mm images exude a greater sense of texture and temperature than Sean Porter’s glossy digital work on It Felt Like Love. Scenes of young men at play, whether in the hot sun of a basketball court or the pitch darkness of a vaping lounge, register as a kind of modern, urbanized take on the training montages in Beau Travail—a homoerotic display of male bodies mesmerizingly moving in concert.

Hittman, though, is a considerably less engaging writer than she is a director. Little effort is made to make a coherent character out of Beach Rats’s would-be love interest, Simone (Madeleine Weinstein), who at first throws herself at a disinterested Frankie, then willingly engages in a night of heavy recreational drug use, only to break up with him because he’s too much of a “fixer-upper.” Similarly perfunctory are the scenes between Frankie and his grieving mother, and those with his predictably sarcastic sister.

In It Felt Like Love, there was at least the suggestion of a slightly skewed and stylized approach being taken to the narrative world of the film, enough to excuse some of the less viable decisions in the plot and of its characters as an extension of the theoretical course that Hittman had chosen to explore. But Beach Rats, at least with regard to its writing, feels like an approximation of typical Ameri-indie realism. By that standard, the film’s narrative world is inchoate, and its characters’ psychologies too tidy—right down to bookending sequences of Frankie watching the Coney Island fireworks, and the contrasting emotions that both scenes are blatantly intended to evoke.