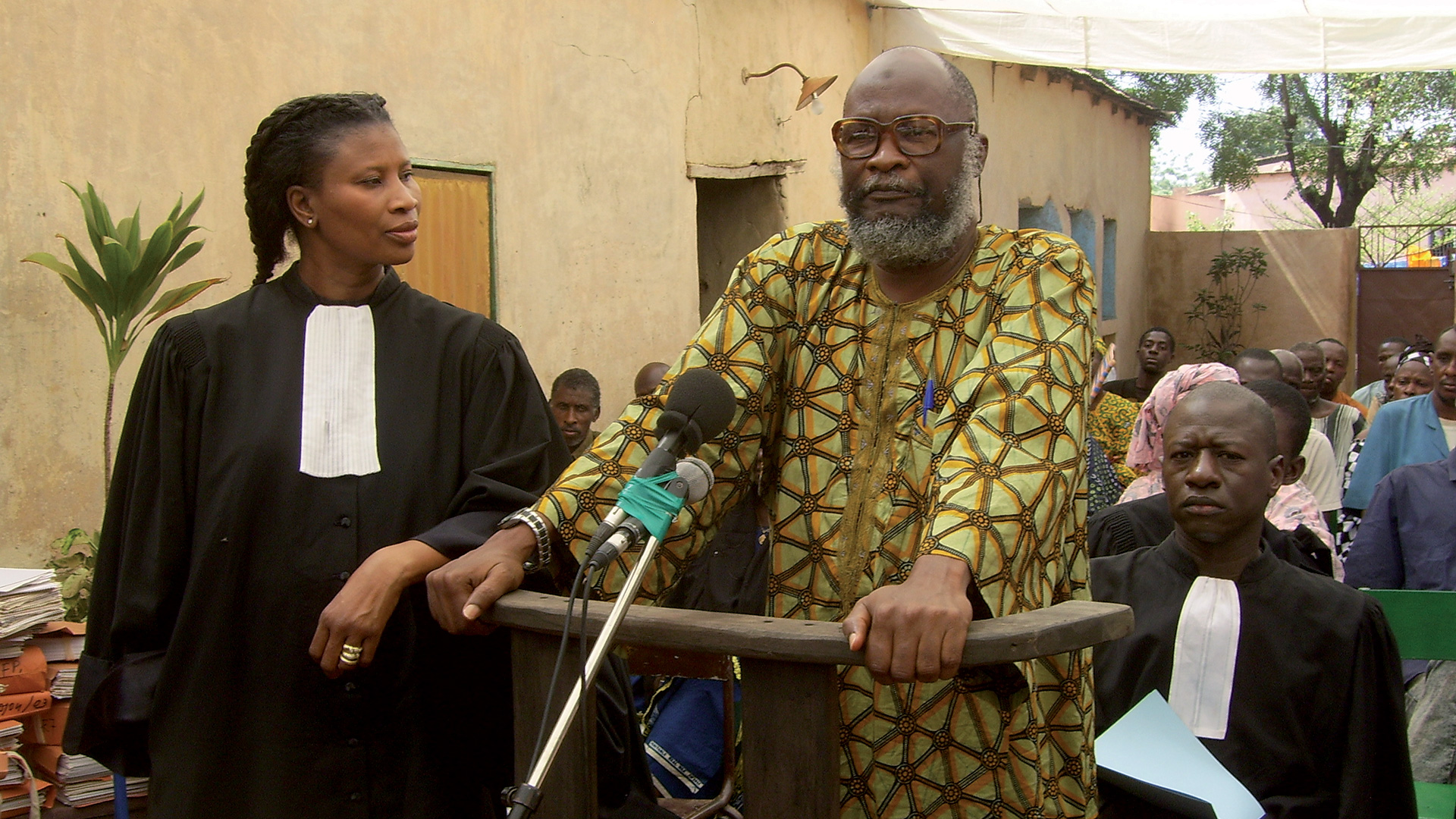 What if Al Gore had made Bamako? This is not an absurd or unfair comparison to make. Say what you will about An Inconvenient Truth as a work of cinema, but that slideshow-on-celluloid has proven incredibly effective at galvanizing the cause against global warming. Poverty in Africa could benefit from such a forceful argument (much more so than from celebrity coverage of African orphan adoptions or Hollywood action movies set in Sierra Leone) to more readily enter the public consciousness. Alas, we cannot say that Abderrahmane Sissako’s Bamako is interested purely in inspiring action against Africa’s victimization at the hands of foreign debt. The film, which stages a fantasy trial against international monetary organizations for their victimization of Africans in a perpetual state of poverty, seems rhetorical by design. But there is a deeper and more troubling argument being made here. The film does as much to resist its rhetoric as to support it. What emerges is a grander agenda: not just reclaiming Africa’s economic well-being, but its very sense of self.

If that implies that Bamako is an ambitious film, you don’t know the half of it. Sissako sets his trial smack in the middle of a modest neighborhood courtyard in the titular city as if to underscore the fantastical nature of his project. The stark juxtaposition of the trial and its surroundings also underscores the schism between the deliberations of the powers-that-be and those everyday lives affected by their decisions. As the trial proceeds, a woman gets dressed, townspeople fetch water from the pump, a marriage procession passes through. Life goes on around and within these legal proceedings, and it’s the interaction between the trial and the townspeople where the film is most inspired.

What occurs throughout the trial are acts of resistance, both active and passive. One lady lashes out at an African lawyer dressed in a Western barrister’s outfit, sneering that he’ll never be “one of them” as she points to his white colleague. Another witness offers a testimony of total silence. Outside the courtroom, townspeople listening in on loudspeakers eventually tune out, complaining that it has become annoying. In many ways, the trial is an exercise in futility (and one wonders if Sissako lets some of the testimonies drag a bit if only to underscore this point). The verdict is never even revealed, and I don’t think it’s because Sissako thinks it’s a slam-dunk case. Though the trial offers much compelling testimony to the economic abuses suffered by an entire continent, the larger issue seems to be not whether the IMF or The World Bank should be put on trial for their exploitive practices, but whether a Western-based trial is even the right way to redress the problem. Again, it is not only about Africans claiming justice, but also about reclaiming their lives.

Take a key line delivered by the first witness, who explains how sick Africans willingly subscribe to a health care system that won’t give medicine unless they can afford it. “Pay or die is the lesson given by the West that we are now inflicting upon ourselves,” she laments. Sissako, in his characteristically elliptical manner, cuts to a videographer who, having found funerals to be increasingly profitable, has come to enjoy filming his dead countrymen. These two seemingly non-sequential moments are in fact connected by the same idea, that Africans have embraced the symptoms of their problems instead of addressing them head-on. And given that a videographer is offered as one example, one suspects Sissako is applying this critique of embracing one’s symptoms upon his own act of filming.

For anyone who cares about what movies have to do with our lives, this, to me, is where the real action of the movie lies. Bamako amounts to a referendum on contemporary cinematic practices and their effect in addressing a problem as complex as that portrayed. The film is both cagey and contemplative about how to even depict this plight: a young man testifies to how he and a group of fellow migrants barely survived crossing the Saharan desert, leaving one young woman to die. His testimony is sullen and flat and frankly rather dull by conventional trial movie standards. But then Sissako cuts elliptically to a re-enactment of the young woman left lying among the blinding sands, surrounded by scavenger beetles—an image horrifying in its matter-of-factness. This is the only re-enactment of the many tragedies recounted over several testimonies and, while watching it, you first wonder why Sissako doesn’t resort to it more often. But a moment like this doesn’t so much drive a point home as ask a question: “Is this what I have to show to make you care?” There are very few films whose approaches are so thoroughly founded on the notion of cinema as an ethical dilemma.

At times the film seems to flirt with conventional character-driven narrative only to rebuff it. Outside of the trial, the main story of Bamako involves a singer who leaves her husband and child to work in another city. This narrative is advanced only intermittently and ends in a death as unexplained as it is shocking. There’s a subplot involving a stolen gun that feels dangled for the sake of manufacturing intrigue, but again leads nowhere. Then there is the now-notorious mock-Western Death in Timbuktu, starring Danny Glover as a typical Western cowboy (except that he’s not white), which comes from out of left field. Situated as a television broadcast, it can be read either as an awkward allegory, an illustration of Western cultural incursions on African pop culture, or a misguided indulgence—as if Sissako himself had gotten bored of the trial he had conceived and opted to try out an homage to Sergio Leone. But it’s worth considering the relationship between a director like Leone—a global myth-maker who aspired like few others towards constructing a universal cinematic language—and one like Sissako, who is much more conflicted and critical about cinema’s role in shaping cultural norms. This apparent divertimento offers one of the film’s most disturbing moments (though presented off-handedly) as the spectacle of a black cowboy slaughtering African villagers gleefully inspires giggles from children watching the show. As one witness testifies during the trial, “Even within our imaginations we are raped.”

Could this resistance to Western influence explain why the film’s most powerful moment is spoken in the Malian language of Bambara and presented without subtitles? An elderly farmer, who at the start of the trial was denied testimony for not following procedure, leaps to his feet and delivers a singing diatribe with explosive force. By this point many of the Malians have tuned out the trial proceedings, but this musical tirade captures everyone’s attention, reminding them why they are there in the first place and cementing the notion of this trial as a procedural folly. It would seem perverse for Sissako to construct this trial only to undermine its credibility, but by the same token, without such frustrations we wouldn’t have this man’s overwhelming testimony.

This is not to say that Bamako is a deconstructionist tract that offers endless questions with no answers. Up to now I have said nothing about one of the essential, ineffable elements of Sissako’s cinema: his incredible ability to film everyday life with as much modesty in tone as vibrancy of light and color. Throughout the trial he cuts away to stray images of people sitting around or doing chores, offering a refreshingly mundane counterpoint to the forceful testimonies heard in court concerning what is really going on in Africa. At first these vignettes seem disjunctive, but Sissako returns to some of them, creating a visual rhythm, and from that a sense of space and place: a community constructed entirely by cinema. If Sissako is critical of the damaging practices of contemporary cinema, he does have an alternative to offer.

Of course, it’s not an alternative that will have conscientious citizens all over the world flocking to the movie house. But, just as it resists many concepts of Western globalist capitalism, the film resists its own potential as a commercial or even political commodity (at least insofar as the latter depends on the former), and not without reason. As one witness argues, “Why should the fate of people depend on their ability to buy and sell abroad?” This is not to say that Bamako is anti-globalism—to assume such demeans the painstaking thought behind Sissako’s project. Bamako, like very few films ever made, is one that comes soberly to terms with a dominant mode of discourse, whether it can be seen in the legalistic proceedings of a trial or the conventions of cinema. It asks whether such a discourse is really in the best interest of a people, or whether, by engaging on those terms, they lose their sense of selfhood. And that gets to the heart of Bamako, a movie whose ultimate rhetoric is simply the right to be.