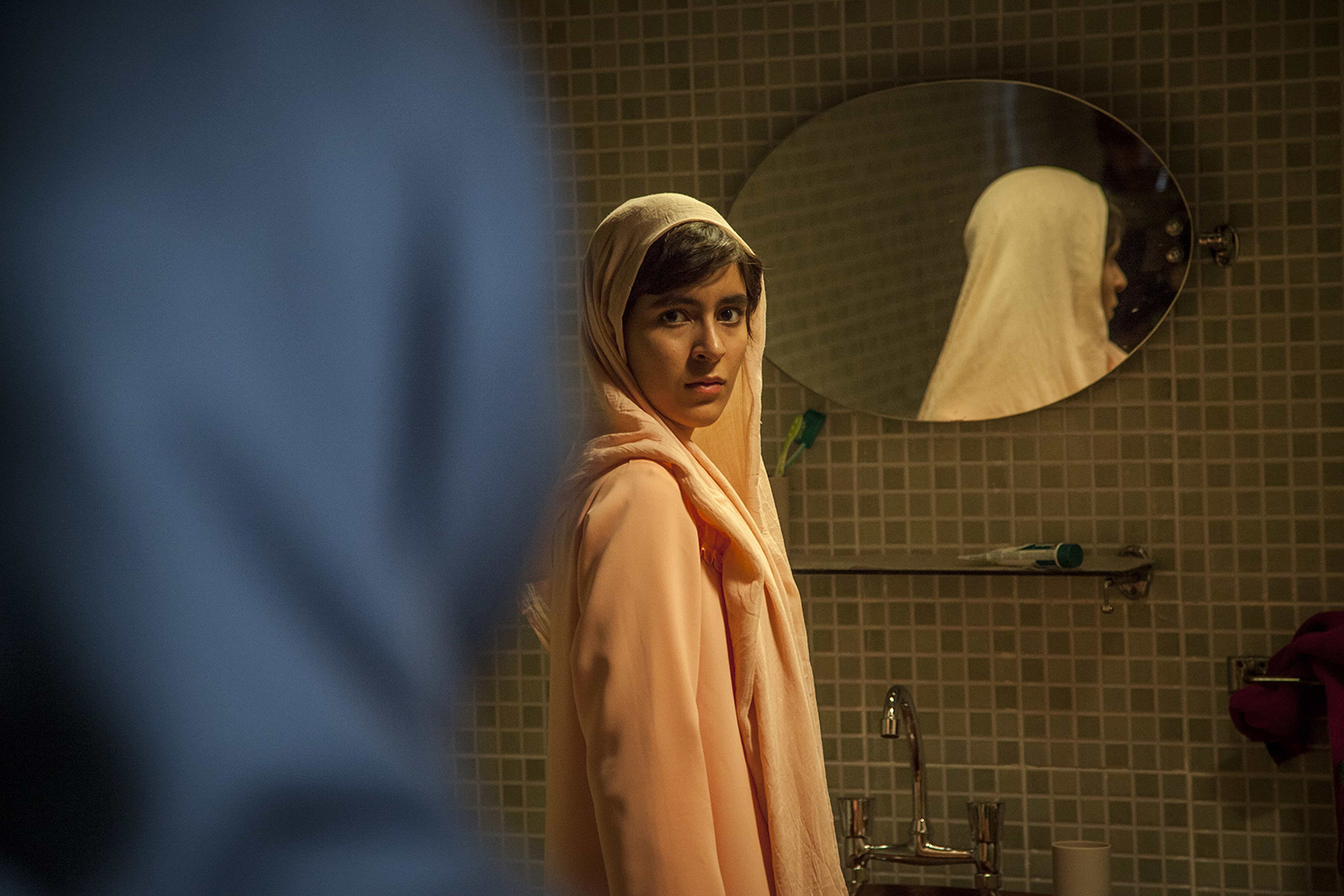 We first see Ava (Mahour Jabbari) sitting in the passenger seat of a car, the camera regarding her from behind the driver’s seat as the girl asks her unseen mother, Bahar (Bahar Noohian), to drop her off a small distance away from school. Ava’s apprehension is made clear when Bahar ignores this request and drives right up to the curb outside the school, then watches as her daughter meets up with a group of friends before then yelling at them to go to class. This is the opening salvo in a war between this mother and daughter, one in which Bahar’s increasing paranoia about Ava’s coming of age prompts an equally strong resistance from the stressed-out girl.

The most shocking moment in Sadaf Foroughi’s film comes early, when Bahar catches wind of Ava spending time with Nima (Mona Ghiasi), a boy with whom the girl shares a music tutor. Mind racing toward heinous conclusions, Bahar drags the teen to an OB-GYN to prove that she’s still a virgin. This profoundly humiliating episode so profoundly traumatizes Ava that she pulls free of the social pressures placed on young women in Iran. Her rebellion initially manifests itself in small acts of defiance, such as refusing to sit at the table with her parents at breakfast, perching herself insolently on the counter. Things spiral from there, with Ava acting out in ways that jeopardize not only her own future, but those of her friends, whose mere association with her bring threats of retribution from Bahar and school administrators.

As written, the role of Ava almost insists on a consistent level of intensity from an actor, and Jabbari more than rises to the task. She gives a performance of constantly simmering rage, filtering typical teenage angst through a steely tone that fills otherwise banal rejoinders with disdainful sangfroid. Ava’s hardened features offer a tacit warning to everyone who interacts with her, and she often meets her mother’s loud hectoring with cold indifference. As Bahar’s outbursts against teachers and parents gradually turn Ava’s friends against her, the girl finds a kind of release valve in taking out her frustrations on her peers. And Jabbari acutely depicts the self-annihilating fury that eats away at Ava, emphasizing the girl’s volatility even at her most vulnerable.

Jabbari projects so much force, in fact, that the film must overcompensate to reasonably depict Ava’s sense of powerlessness. It’s not enough for Bahar to be a domineering mother, she must also heap scorn on others suspected of being a bad influence on Ava, including publicly shaming the mother of Ava’s best friend, Melody (Shayesteh Sajadi), for being separated from her husband. Bahar’s incessant harassment threatens to bring embarrassment upon Ava’s school, but it also gives the headmistress, Ms. Dehkhoda (Leili Rashidi), carte blanche to terrorize her students. Resembling an Iranian Dolores Umbridge, Dehkhoda, always clad in delicate, spotless white gloves, speaks in a honeyed voice laced with venom. She’s even scarier than Bahar because she represents an entire power structure that can be brought to bear on Ava.

These twin poles of oppression would be enough to smother Ava, but Foroughi’s film is relentless in never giving the girl a moment’s peace. Ava is isolated from every single person around her and regularly belittled by even the most minor characters, such as the music tutor who humiliates her in front of Nima. The constant cruelty is so inescapable that the film starts to feel unfair not only to the protagonist, but to Iran itself. Ava seems less like a real girl faced with the pressures of an unequal system than a device to be prodded and poked, a stand-in for every possible indignity that can be suffered upon a young woman in Iran. This has the effect of simplifying Ava’s own complicated behavior, rendering Jabbari’s three-dimensional performance of rage, sorrow, and budding self-discovery against a flat background that reduces her adolescence to one long torture session.

Foroughi favors off-center blocking and shots that linger on interior spaces after characters leave them, though these images never communicate anything deeper about these surroundings. Many more shots are filmed in soft focus, ostensibly to reflect Ava’s emotional or psychological perspective, but such an artistic flourish would suggest that Ava lacks for clarity, when in reality she’s more than aware of what forces in her life are trying to break her down. Ava’s overwhelming agony, especially when set against a domineering mother and a henpecked, feckless father (Vahid Aghapoor), blatantly references Rebel Without a Cause, but that film balanced its feeling of social anomie with depictions of the stabilizing bonds of friendship and affection. Without those, Ava completely succumbs to ponderousness.