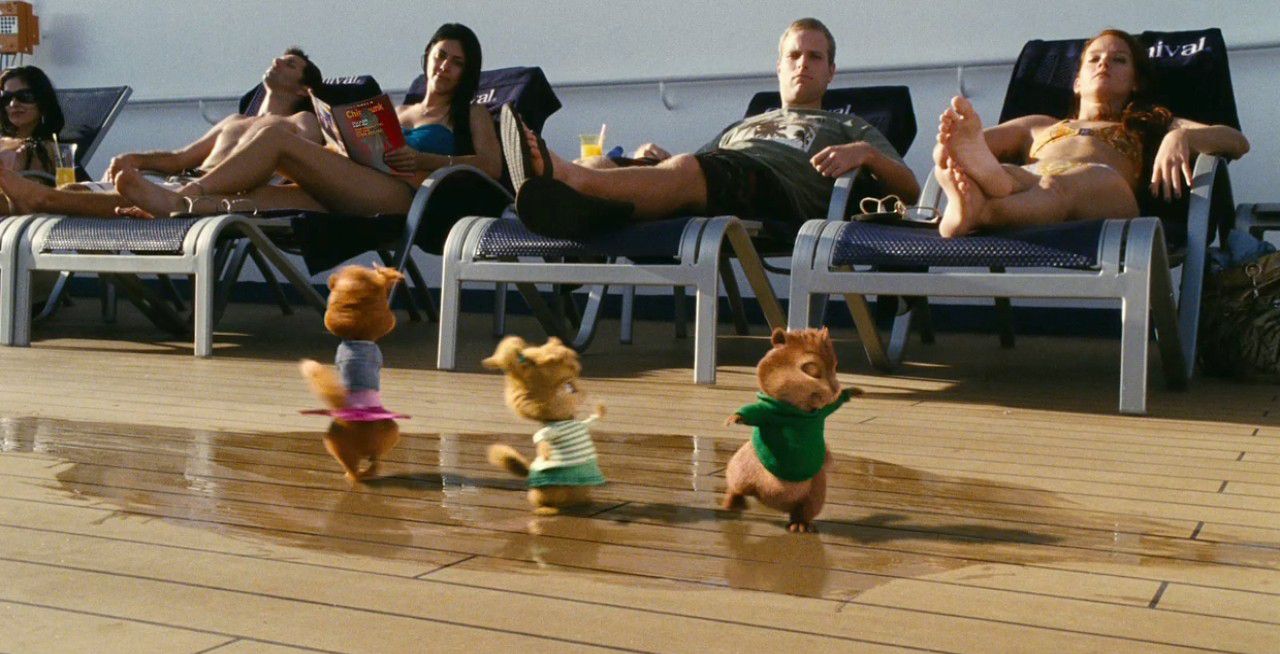 I missed out on the first two Chipmunks movies, so naturally I was afraid that getting started with the series in its third entry would be like walking in on Mysteries of Lisbon after missing the first three hours, or starting Twin Peaks with its second season. My fears were unfounded, since Alvin and the Chipmunks: Chipwrecked tells a self-contained story, and those characters whose connections to the previous films aren’t immediately apparent spend most of their screen time explaining them, over and over. It’s that rare thing, a movie that clocks in under 90 minutes, but feels like an endurance test in every moment, at every plot concern, and every musical number.

And so, ignorant of the first two Chipmunks movies, here’s what I took away from Chipwrecked: A decrepit, middle-aged man (Jason Lee, who now looks and sounds so much like Bob Odenkirk that the latter should consider an injunction of some kind) cares for six digitally rendered rats, all of whom are inconsiderate, dipshit assholes, and the only two reasons (that I could infer) that he doesn’t put them all into a burlap bag and drown them in a river is that he is deeply, psychotically delusional. For one, he believes the one in the red shirt to be his son, and what’s more, he thinks the sextet possesses some kind of musical talent. The “family,” as it were, embarks on a luxury cruise, where trouble immediately and predictably ensues. People slip on stuff, someone gets hit in the balls, and the three rats that are supposed to be girl rats engage in a dance-off with a trio of slightly zaftig transvestites. As a result of this embarrassing conflagration, and the disgrace of discovering that two of the males are degenerate gamblers, the middle-aged man hurls all six of them overboard. They die horribly.

Well, I may have embellished the last part. All the major characters do end up overboard, and subsequently on a tropical island, which is already inhabited by the completely insane yet peppy Zoe (Jenny Slate, button-cute and fantastically leggy). As someone who’s most recently camped it up through four seasons of My Name Is Earl, Lee plays it cool, leaving it to David Cross, who’s altogether a better actor and a funnier comedian, almost to wilt from the crushing humiliation of his assignment. Would you say I was kidding if I told you he spends the entire movie in a pelican costume and, at one point, says, “What’s up, brah?” I am not kidding. This is “the Al Pacino Dunkin’ Donuts commercial in Jack and Jill” as an actual movie.

Inexplicably for a 2011 comedy set largely on a tropical island, there are almost no Lost jokes, but plenty about Cast Away, and a spoof of the “double rainbow” YouTube video. As evidence that Chipwrecked is a film of our time, someone says “Winning!” and you think “Oh, that’s funny because Charlie Sheen,” and the rats cover some hit songs from Lady Gaga’s The Fame. You almost expect there to be dialogue like “I think Barack Obama will make a terrific Democratic candidate, based on his recent appearance at the Democratic Convention,” “In my opinion, Shôhei Imamura is the greatest living director,” and “When, oh when, will the Academy Awards recognize Martin Scorsese with a Best Director win?”

Despite my reservations toward movies like Cars 2 and Puss in Boots, in their planning period one envisions a conference table of the most proficient screenwriters, the gag- and pun-writing counterpart to Google software developers, or Goldman Sachs trading floor wizards. If you were to visit the same pre-production phase in the timeline of Chipwrecked, you’d probably find comedy writers who wouldn’t pass muster at the Disney Channel because their humor was deemed insufficiently edgy. Shoddy writing and shoddy production make appropriate bedfellows, given that several of the year’s biggest animated movies were hardly less cringe-inducing, but often felt worse for having been covered in layer after layer of polish and over-managed perfectionism. Chipwrecked, on the other hand, is like a DVD you might find in the discount bin at a drug store where all the other titles are in Cyrillic. Leave it.