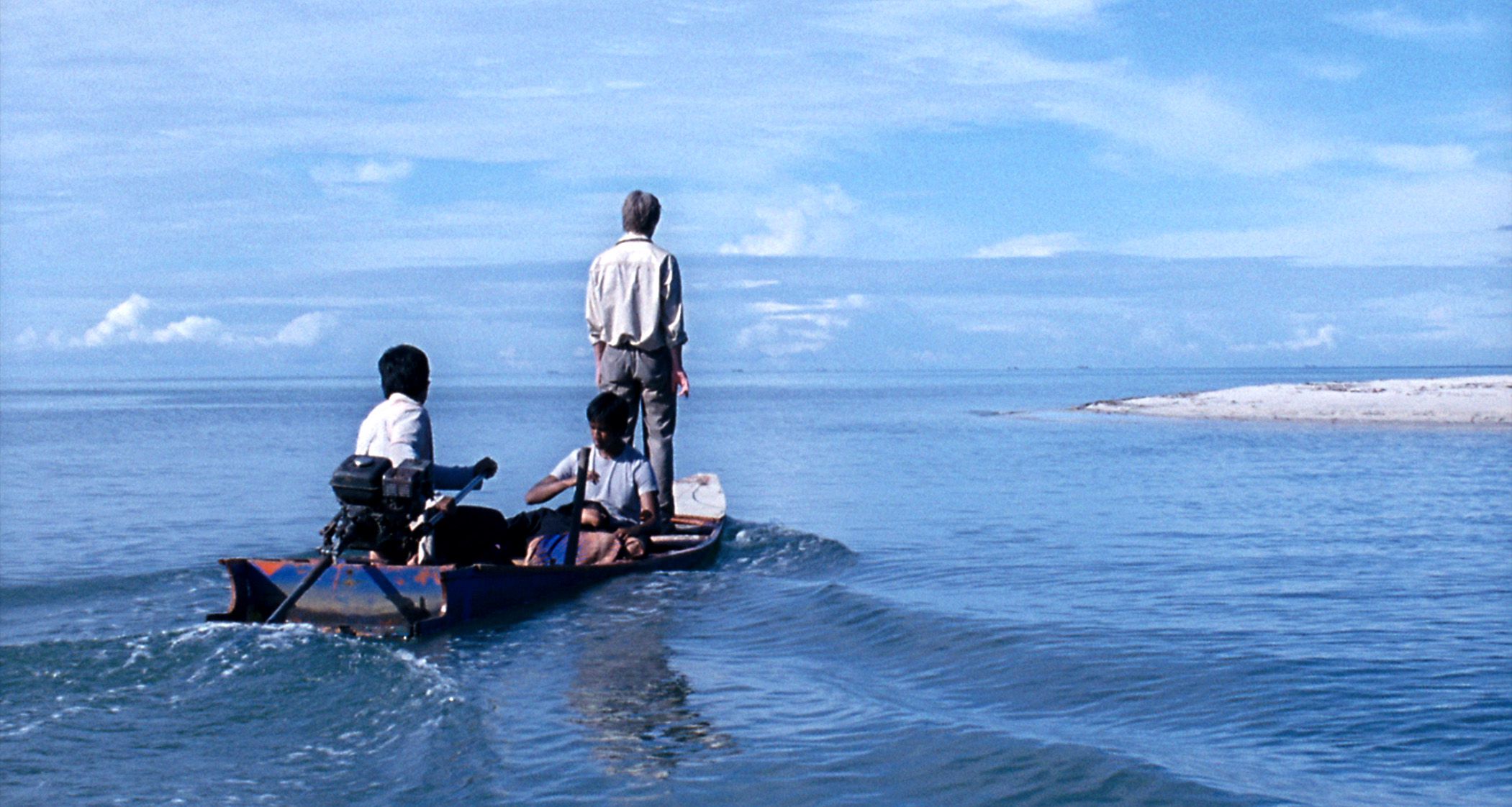 Chantal Akerman’s Almayer’s Folly opens with a series of nested feints. First there’s the drift in through the door of a sweaty bar in some grubby Malaysian locale, the slow, gliding camera that seems to promise a bit of languid mood-setting. Within that setup we get a shocking and sudden murder (shades of A Brighter Summer’s Day) as a lurking onlooker leaps onstage to stab the garishly dressed lounge singer, interrupting a karaoke rendition of Dean Martin’s “Sway.” From there, all auspices of realism vanish, as one of the backup dancers, still rocking in a trance as the dying singer is dragged away, finally comes to, straightens up, and breaks into a soaring aria. Though all this, the perspective pushes resolutely toward the woman, thrusting past waves of extraneous action, finding its true protagonist in a tightly framed close-up.

This is Nina (Aurora Marion), the daughter of the titular Almayer and perhaps even the folly itself, a mixed-race fugitive quietly striving for autonomy. This first scene leads into a flashback, to a time when Nina was a child and her father was the center of the story. It’s a significant transition: By positioning Nina’s ostensible moment of catharsis at the outset, at a point where it has no meaning and no purpose but to disrupt a seemingly conventional introduction, Akerman signals the start of another ingeniously singular film. She also indicates a marked shift in perspective from Joseph Conrad’s source novel, while coloring and transforming everything that will happen from here on. First and foremost, this won’t be the old story of vanquished megalomania, of masculine endeavoring against harsh elements, or a man consumed by the insuperable savagery of the wild. It also won’t be the tale of two young lovers running off to start a new life, as the sequential ending seems to promise, but a declaration of freedom from traditional strictures, both personal and narrative.

The source story, the one Akerman pays due diligence to in order to eventually subvert, concerns the elder Almayer (Stanislas Merhar), who sets up a way station on a Malaysian river, after his dreams of striking Oriental gold turn up empty. Guided by his mentor Captain Lingard (Marc Barbé), he marries a native woman and sires Nina, who becomes his last hope after the way station also goes bust, the river forgotten in favor of more convenient waterways. His dreams dashed, his marriage loveless and cold, Almayer becomes obsessed with his legacy, sending Nina off to an English boarding school, where she can be taught to embrace civility and order. When this too fails, he attempts to marry her off to the son of a rich neighbor, a scheme that comes off as well as you might expect.

Inhabiting this material, the always transgressive Akerman works within the boundaries of a classic colonialist narrative, with Almayer hopelessly trying and failing to harness the fruits of the land he believes is his to control. But this plotline becomes the secondary focus, with more attention paid to the seething vibrancy of the jungle, dense with color and lashed with revitalizing storms, its greens, browns, and blacks presenting a strong, earthy color palette. The resulting document is both fervently passionate and formally meticulous, the latest stunning coup for a director who’s made a career of repurposing archetypal storylines, finding women in various prisons and freeing them, or at least shedding ample light on their subjugation.

What Akerman has done here is locate the most interesting plot thread in a seemingly outmoded novel, trimming it to nurture the story of a girl born with one foot in two worlds, and with no special desire to belong to either. So while she barely speaks, Nina has other means of expression, metaphorically associated with the power of the forest, a force that’s less primeval and destructive than ever-regnant; Almayer’s expectation of control seems laughably flimsy, at the mercy of a giant river a pulsating jungle. This means that while Almayer’s Folly is a story of waxing and waning forces, an idea enforced by the repeated motif of a pale moon shadowing the water, the elder Almayer’s decline is not a downfall as much as the necessary consequence of his hubristic transgressions: As he progressively wastes away, Nina becomes more beautiful and suffused with life.

The same goes for the sham love interest, Dain (Zac Andrianasolo), a militant separatist turned oppressor who’s also summarily dispatched, via the film’s opening murder. That scene’s implied suggestion of suppression (Nina is one of four backup dancers) lets us know that his promises of love aren’t genuine; its outcome shows that his menace won’t prove an actual threat. Gestures like this might undercut a more traditional movie, but what Akerman provides isn’t a linear story as much as a raging, rigorous tone poem. Such confident moves therefore establish the film as a spectacular transference of energy, with Akerman subsuming and repurposing Conrad’s story for her own purposes, diverting its channel just as the river bypassed Almayer himself.

In this context, it’s significant that the introductory murder is committed by a long-suffering servant, a periphery character who suffers silently for the rest of the film. In Akerman’s able hands, this becomes a story of old orders disrupted, tables turned, and dynamics flipped. Taught to her in the English school, the Mozart aria that Nina sings may be a symbol of her oppressors, but it isn’t theirs to control. Freed from all manners of male and European repression, from lip-syncing Dean Martin, and finally from the shackles of Conrad’s stifling novel, she finally gets to deliver her own version of an old song, a startling moment of independence that concludes her inevitable bloom.

If I Had a Sight & Sound Film Ballot: Aaron Aradillas’s Top 10 Films of All Time

If I Had a Sight & Sound Film Ballot: R. Kurt Osenlund’s Top 10 Films of All Time